Fix Was In for VMI Contract, Lawsuit Alleges

In awarding a contract to investigate racism at the Virginia Military Institute, the Northam administration stacked the deck in favor of preferred vendor, Barnes & Thornburg, and stymied efforts by a competing bidder, the Center for Applied Innovation (CAI), to contest the award, alleges a suit filed by CAI in Richmond Circuit Court today.

The State Council of Higher Education for Virginia (SCHEV), which managed the $1 million Request for Proposal, engaged in a “run the clock down” strategy of delay and hinderance to prevent CAI’s principal, Robert C. Morris Jr., from examining more than 1,000 pages of procurement documents within the 10-day period allowed under state law to file a protest, the lawsuit contends.

Further, the lawsuit charges, SCHEV was acting at the behest of the Attorney General’s office and senior Northam administration officials to avoid “media attention” to the procurement process.

After The Washington Post published articles last fall declaring the existence of “relentless racism” at VMI, Governor Ralph Northam expressed “deep concerns about the clear and appalling culture of ongoing structural racism” at the military academy. Ordering an equity audit and investigation by an outside firm, Northam handed the job of writing the RFP, “Marching Toward Inclusive Excellence: An Equity Audit and Investigation of Virginia Military Institute,” to SCHEV. A dozen entities submitted proposals. A team of Northam administration officials winnowed down the submissions to four, and then selected Barnes & Thornburg. CAI, which had lined up a highly qualified team with strong minority representation and military backgrounds relevant to an investigation into a military academy, did not make the first cut.

Yorktown-based CAI, active since 2011, has extensive experience working on government contracts, including surveys, data collection and investigation. Among many other projects, Morris supported the International Criminal Tribunal in the prosecution of atrocities resulting from the Rwanda genocide. After losing the VMI-investigation contract, Morris burrowed into the inner workings of the racism-investigation procurement process by accessing documents available to him as a protesting bidder and also through the Freedom of Information Act. What follows is a chronology pieced together from the CAI lawsuit and supporting exhibits.

After Northam announced Oct. 20, 2020, that he was planning to launch an investigation, Barnes & Thornburg expressed interest in handling the contract. On Oct. 23, the firm sent a letter describing its approach to Northam, the Lieutenant Governor, the Attorney General, and members of the Legislative Black Caucus. The firm proclaims on its website its commitment to combating racism and “the larger social forces” responsible for it. Firm leaders have committed $75,000 to a nonprofit foundation to combat racism and social injustice, formed a committee to combat racism and social justice internally, and provides pro bono legal services to combat racism.

The contents of that document are unknown. The copy provided to CAI two-to-three months later was almost entirely redacted on the grounds that it was a Governor’s Confidential Working Paper. Even the names of recipients were blocked out. 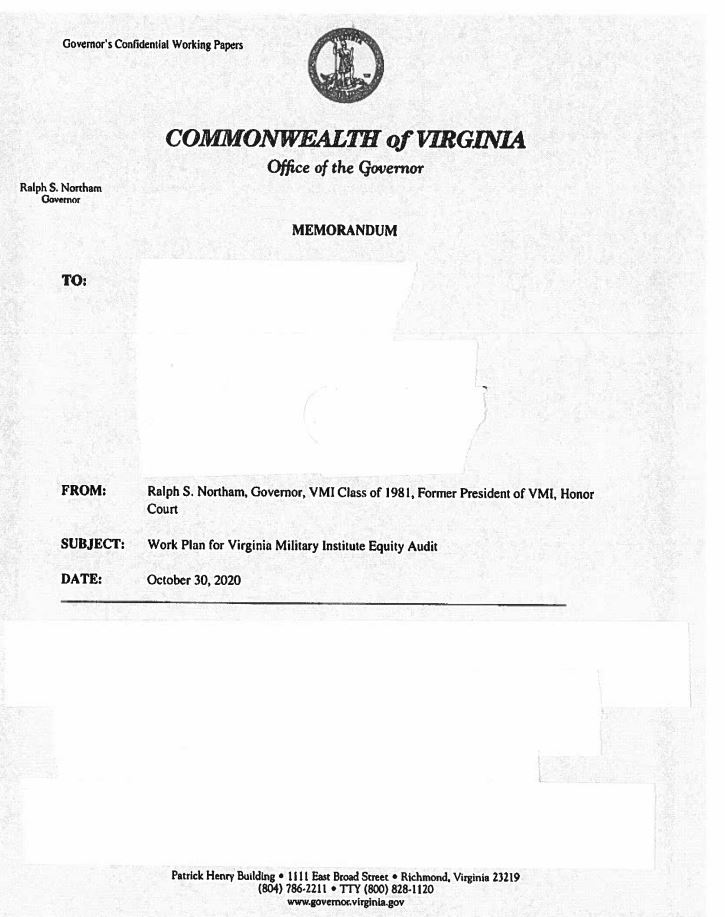 However, the CAI lawsuit contends that the Northam administration shared the very same document with Ian Shapira with The Washington Post, thus invalidating any claim that it was a “confidential” working paper. The lawsuit details how an Oct. 30 article Post article contained exact language and specifications “that could not have … been obtained without access to the Work Plan itself or its details provided directly by the Governor or his Office to the Washington Post reporter.”

That memo provided the basis for SCHEV’s procurement officer to compose the RFP, “Marching Toward Inclusive Excellence: An Equity Audit and Investigation of Virginia Military Institute.” Working with oversight from the Governor’s Office, the lawsuit alleges, SCHEV issued that RFP November 5.

Members of the Governor’s Office closely tracked the progress of the RFP and the granting of the award to Barnes & Thornburg. The lawsuit cites a Nov. 6 email from SCHEV Director Blake to other officials: “We had a good call with the Governor’s Office this morning. They are working on the details of the proposal.”

Twelve vendors responded to the request, ten of which CAI was able to identify from incomplete responses to its document requests and FOIA filings.

Morris, a VMI alumnus and a decorated veteran who has served combat tours in Panama and Iraq, submitted a proposal to assemble a Senior Subject Matter Expert and Oversight Group comprised of eleven individuals, most of whom had military backgrounds. They included Pat Locke, the first African-American woman to graduate from West Point; Jamie L. Mines, the first African-American woman to graduate from the Naval Academy; and Retired Lieutenant General Russel Honore, also an African-American, who is best known for his leadership role in the Hurricane Katrina aftermath. CAI’s submission proposed working to find common ground with VMI stakeholders to build a climate of trust. It also emphasized the need to ensure statistically valid survey data.

Six Northam administration officials participated in the evaluation process. Four were high-level political appointees. One was a career state administrator. They included:

The evaluators scored the dozen proposals, giving up to 40 points for experience & qualifications, up to 30 points each for methodology & plans, up to 20 points for Small Woman and Minority-owned (SWAM) qualifications, and up to 10 points for price. After two rounds, Barnes & Thornburg had the high score. It was followed closely by Alston & Bird, an Atlanta law firm that also touts its commitment to diversity, inclusion, and “the advancement of civil and human rights and liberties for all.”

CAI scored points for its minority status, which the two law firms did not. And it essentially tied with the two firms for price; each submitted bids for $1 million or slightly under. Despite the sterling credentials of the members of its oversight group, CAI was given significantly lower scores by all evaluators for experience & qualifications. Likewise, it received fewer points across the board for methodology & plans. Among the apparent irregularities in the scoring process, according to the lawsuit, the unknown evaluator gave Barnes & Thornburg 35 points for methodology & plans, even though 30 was the maximum allowed.

On December 7, according to the lawsuit, SCHEV issued its Notice of Intent to award the contract to Barnes & Thornburg. However, notice of the provisional award was not given to CAI or posted on eVA, Virginia’s digital procurement portal, until two days later.

Upon getting the news that he did not win the contract, CAI’s Morris immediately began attempting to secure the procurement records that would allow him to file a protest. State law gives unsuccessful bidders 10 days to appeal. Due to the late notification, Morris had only eight days.

SCHEV was uncooperative, the lawsuit alleges, and eight days later, Morris had obtained none of the documents. On December 15, CAI filed a protest, declaring that it had not yet seen the procurement records.

Complicating the matter was the fact that Morris requested virtual access to the documents. The COVID-19 epidemic was intensifying at that time. An army veteran with numerous war-related disabilities, Morris also has asthma and sleep apnea, both of which place him at greater risk to the COVID-19 virus. He preferred to view the documents online rather than in-person.

SCHEV told Morris that it was in discussions with the Department of Government Services to provide virtual access to the records. The lawsuit alleges that SCHEV’s representations about the DSG discussions were false. In a separate communication, SCHEV’s procurement specialist also cited legal guidance from the Office of Attorney General as a rationale for denying Morris access to the documents: “Our Attorney General has determined because of the media situation around this procurement and other offerers activities the procurement file can be only viewed in person this time.”

SCHEV eventually did make the documents accessible at its office in downtown Richmond. Scheduling a viewing was difficult, however, because SCHEV employees were working remotely due to the pandemic.

Morris had to drive back and forth between Yorktown and Richmond multiple times to view the procurement record in SCHEV’s office. On one occasion, he arrived at the SCHEV office at the scheduled time and waited for an escort to the document room, only to be told after more than a half an hour by security personnel that no SCHEV employees were in the building and none would be there until later in the day. The one time that Morris did succeed in viewing the documents, SCHEV allowed him only two hours to review more than a thousand pages. He was not allowed to make any copies.

SCHEV shut down its offices over the Christmas break and would not allow Morris to visit the records again until Jan. 5, 2021, by which time it was too late to file a protest. Blake signed the Barnes & Thornburg contract on either Dec. 30, 2020 or Jan. 7, 2021 — documents differ on the exact date — but, according to the lawsuit, the agency continued stonewalling Morris’ FOIA requests.

“It is abundantly clear that SCHEV, aided by the AOG, Governor’s Office, and other Virginia Government officials and agencies, employed tricks, artifices, outright misrepresentations, and intentional omissions to engage in an unlawful scheme to fraudulently conceal from CAI material portions of the procurement record for the RFP,” states the lawsuit. The scoring, the suit alleges, was “arbitrary, capricious and demonstrated bias.”

The lawsuit asks for an injunction to halt the Barnes & Thornburg investigation of VMI until CAI’s lawsuit is resolved.

As a bidder, CAI was entitled to fair and unbiased process for awarding a contract on the RFP. All citizens of the Commonwealth are entitled to rest assured that government funding is provided in a fair, lawful manner, free of corruption and impropriety. Without the injunction sought, B&T has or will immediately begin to perform the substantive work it was not entitled to be awarded. CAI and all citizens will be irreparably harmed by permitting a contract that was illegally awarded to be … paid for with Virginia taxpayer dollars.

CAI has posted a copy of the lawsuit along with supporting documents here.

This entry was posted in Courts and law, Culture wars, Education (K-12) and tagged James A. Bacon, Virginia Military Institute. Bookmark the permalink.