Fear and Loathing in Mathews County 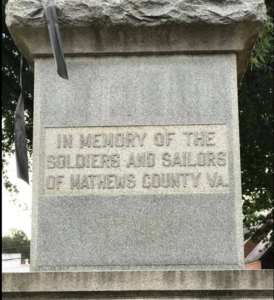 When Mathews County Supervisor Amy Dubois offered a resolution on June 22 that the Board of Supervisors meet at the high school auditorium instead of the Historic Courthouse, surprised members of the public attending called out, “Why?”

At the meeting, all Dubois said was, “We were urged by an organization within the county to move to the high school.” Although it was not audible on a citizen’s recording, the Mathews Gloucester Gazette Journal added that she said “for safety reasons.” (County staff failed to broadcast or record audio for the meeting.)

Supervisor Paul Hudgins was not pleased about the resolution and clearly said on the citizen recording, “We voted on this last month, to go back to the old courthouse. We keep changing these meeting schedules like some people do their clothes.” Supervisor Jackie Ingram also objected, and she and Hudgins voted against the change, which passed 3-2.

It took a FOIA request to the County from Matthew Twist of WAVY to confirm on June 23 what the citizens of Mathews had been saying through word of mouth. WAVY.com posted, “A letter from a local chapter of the NAACP voicing concerns over contention at Mathews County Board of Supervisors meetings has prompted the body to move its regular meetings to a different venue.”

WAVY’s post reported Mathews NAACP President Edith Turner said in the June 17 letter, “People who want to attend meetings of the Board of Supervisors can be more assured of their safety at the high school venue, because guns are not allowed on school property.” WAVY also said, “The letter calls the historic courthouse’s location adjacent to the Confederate monument “unfriendly to African Americans” and others who support civil rights.… The potential for violence is heightened by the current debate over the location of the Confederate statue leading up to the referendum in November, Turner wrote.”

Neither members of Turner’s group or other Black citizens were ever unsafe at Board meetings. The potential for violence was something the Mathews citizens who regularly attended board meetings in past years could never imagine they would be accused of creating. White, Black, Multi-racial, all part of Mathews, all interested in the issues before the supervisors. Encouraging distrust only brings more distrust — on all sides.

When Edith Turner was the moderator at the NAACP Candidate Forum in 2019, she asked each of us whether we would object to adding a memorial to slaves to the Courthouse monuments. No one saw a problem in that, and in fact, I suggested in addition to that memorial, others should be erected to celebrate Black citizens of Mathews who were important to our history and growth. I mentioned as an example, Lavinia Hudgins, the supervisor of Black schools in Mathews in 1914. Born in 1874, her mother taught her to read before she started school. She graduated from Hampton Normal and Agricultural Institute (now Hampton University) in 1893. Ms. Turner gave me a strange look and moved on to the next person. 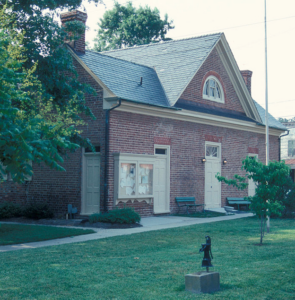 “Mathews County Courthouse Square is a handsome, well-integrated complex of buildings and monuments which spans the history of the county, and which reflects its growth and the events which have shaped its citizens’ lives.” Final Nomination for National Register of Historic Places.

I wonder if there will come a time when we can ever see ourselves and our Courthouse area that way again.

The County staff failed to broadcast and record sound or video of the meeting from the high school location on June 22. The meeting portal listing was marked as LIVE on the county website during the meeting, but citizens only got a message of “No Media Available.” A Mathews resident used a hand-held device to record and post a video on Facebook.

This entry was posted in Culture wars, Transparency and tagged Carol J. Bova. Bookmark the permalink.