As we close out the decade of the 2010s, Virginians’ collective response could well be, “Good riddance.”

For all of the state’s assets, economic growth in the Old Dominion consistently lagged that of the nation between 2010 and 2018, according to data published by the 2019 State of the Commonwealth report. The lackluster performance, as measured by growth in Gross Domestic Product, could not be blamed on a single metro, or even upon the state’s moribund rural areas. The Compounded Annual Growth Rate (CAGR) of every single metropolitan area, large and small, under-performed the national economy. 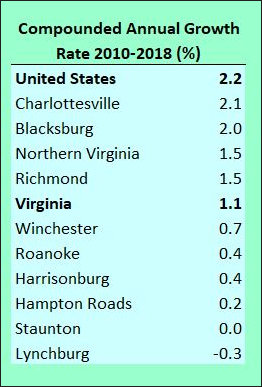 Only two metros came close to matching the national average — Charlottesville, which sported a 2.1% CAGR over the decade, and Blacksburg, with a 2.0% rate. The commonality: Both are home to Virginia’s two leading research universities, the University of Virginia and Virginia Tech.

These data don’t tell the whole story — they omit the year 2019. But the year we’re closing out is a mixed bag and not likely to change the big picture. As the State of the Commonwealth report notes, job growth this year accelerated in the small metros (excepting Blacksburg) but has slowed in Richmond, Hampton Roads and NoVa.

Focusing on the short-term outlook, the State of the Commonwealth report doesn’t ask that question. Permit me to offer a few observations and prognostications. The key insight is that Virginia’s problems are long-term and structural.

Virginia has loads of tech talent, but the state generates only modest tech innovation. Virginia has the most tech-savvy workforce of any state in the country. But the Old Dominion’s economy is hostage to federal spending, in particular spending on defense, intelligence and homeland security. The procurement/ consulting mindset is very different from the product innovation mindset prevalent in other U.S. tech centers, Furthermore, neither of Virginia’s two leading research universities are located in the state’s two largest metros, hence, the innovation ecosystem of both regions are under-developed. One consequence is that NoVa punches beneath its weight in tech innovation, and Hampton Roads can barely swing a punch at all. Another consequence is that UVa and Tech, confined until recently to smaller metros, have not lived up to their potential as research centers.

Amazon to the rescue? The imminent arrival of Amazon may catalyze the rise of a dynamic innovation ecosystem in Northern Virginia. Amazon, of course, will be the key player. But equally important will be the suppliers, collaborators, and spin-offs lured by Amazon, the building of the new Virginia Tech innovation campus near the Amazon campus, and the cultivation of a product-innovation mindset in Virginia’s dominant tech community. Amazon has the potential to transform NoVa’s tech sector from one that serves a single customer, the federal government, into one that creates products that can be grown globally. Or so we can hope.

On the NoVa periphery… I don’t see much hope of Amazon transforming any other metropolitan economy in Virginia. Richmond, Charlottesville, Winchester, and Harrisonburg might benefit from their location on Northern Virginia’s periphery without actually being part of NoVa with its hideous traffic, unaffordable housing, and other quality-of-life deficiencies. As oases of livability, perhaps they can attract smart, educated, entrepreneurial refugees from NoVa who can add vigor to local economies. As the state’s third largest metro, Richmond will continue chugging along at a not-too-hot, not-too-cold pace. Blessed by UVa and a growing innovation ecosystem, Charlottesville has the potential to shine more brightly, but the metro is too small to have much impact on average statewide growth.

Hampton Roads as “sick man of Virginia”… Hampton Roads will benefit from increased defense spending in the next few years, particularly shipbuilding. But the region has huge infrastructure issues. Vulnerable to climate change, it will have to devote billions of dollars to protecting its sprawling, low-density development from increased flooding. On the tail end of the nation’s natural gas pipeline network, it is out of the running for energy-intensive industry. Sitting atop a fast-depleting aquifer, the region is also out of the running for water-intensive industry. Addressing traffic-congestion issues on Interstate 64 requires multi-billion-dollar  bridge and highway spending. Further, dominated by defense and shipbuilding, the region struggles to develop an innovation economy. Perhaps something other than the on-again, off-again defense sector will light a fire under the Hampton Roads economy, but I don’t see it.

The smaller metros… The economics of the Knowledge Economy confer immense advantages to larger metropolitan areas with deeper labor markets. Absent some economic miracle, the best that Roanoke, Lynchburg, Staunton, Bristol and Danville realistically can hope for is to maintain positive momentum — enough job and wealth creation to support a decent standard of living, strong communities, and a high quality of life.

Broadly speaking, Virginia needs to do four things to resume its stature as a national growth leader. It needs to invest in human capital, up its game in “economic development” (the recruitment of out-of-state investment), build its metropolitan innovation ecosystems, and address its transportation and housing growth bottlenecks — without raising taxes appreciably. Whether the commonwealth has the will, amidst intensifying culture wars, to focus on these priorities remains to be seen.

This entry was posted in Economic development. Bookmark the permalink.