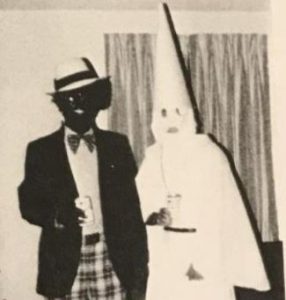 As Donald Rumsfeld famously said of the Iraq War, there are known unknowns and unknown unknowns — things we know we don’t know, and things we don’t have a clue we don’t know. The same thing could be said of Governor Ralph Northam’s now-infamous medical school yearbook photo of a young man in black face and another in KKK attire — either one of whom, or neither, may be Northam himself.

Northam told the nation in a press conference that he believes he was not in the photo, and he doesn’t know how the photo came to appear on his personal page in the yearbook. No one appears to be paying much attention to his denial, which conflicted with an earlier apology and was undercut by his own admission in the press conference that he had appeared in black face during a Michael Jackson dance contest — in other words, that he’d dressed in black face, just not in the particular photo in question.

Democrats made up their minds about Northam’s irredeemable guilt even before the press conference. Almost every conceivable Democrat-affiliated group from the Democratic National Committee to the Virginia League of Democratic Dogcatchers has demanded his resignation. Republicans, only too happy to kneecap a Democratic governor, have called for the same.

Here’s what’s extraordinary about the episode: No one seems terribly interested in finding out if Northam’s version of events holds water. With minds already made up and political commitments made, no one is thinking about what we know, what we don’t, and what entirely unexpected evidence might be lurking out there. In another moment in our political history, people might say, “Yeah, this sure looks bad, but Northam says he’s innocent, so let’s sort through the facts.” What we hear now is, “Facts? We don’t need no more stinking facts. We’ve got all the facts we need.”
Here are some questions that occur to me. I’m sure others could add to the list.

Coonman. Northam was known at Virginia Military Institute by the nicknames of Goose and “Coon man.” Based on the fact that the word “coon” is a pejorative for African-Americans, many observers have assumed that the nickname strengthens the case that Northam was racist. And perhaps it does. But “coon” is also short for “raccoon.” A breed of hunting dog used in hunting raccoons is known as “coon hound.” It is not self-evidently obvious that “coonman” has a racist meaning. It could just as well have a hunting connotation, or some other origin we can’t even guess. Northam said he didn’t know the derivation of the nickname, but attributed its use to two older VMI classmates. The question could be readily settled if the classmates could be identified and queried. What did they mean by the name? Did Northam understand and accept that meaning? Rather than assume a racist meaning shouldn’t someone look into this?

Who’s in that yearbook photo? The identity of the figures in the offending photo are impossible to identify. Northam insists that neither man is him. Is there any proof to suggest otherwise? If there is, let’s hear it.

Who submitted the yearbook photo? Let’s posit for purposes of argument that Northam was not in the photo. Who submitted it to the yearbook for publication? Northam did not address the issue directly. He said plausibly that he never acquired a copy of the yearbook and had never seen the photo before it was recently brought to his attention. I haven’t seen his detractors address the issue either. Could someone else have submitted or inserted the photo as a prank? To draw a firm conclusion, it would be exceedingly helpful to know what the protocols were in the mid-1980s for selecting photos for the Eastern Virginia Medical School (EVMS) yearbook. EVMS, it appears, is in the process of doing that. Ideally, the school will track down the original editors of the yearbook and they will shed light on the circumstances.

Whether we’ll get honest answers from potential witnesses is another matter. In the current rush to judgment, any witness offering information that might exonerate Northam surely would weigh the potential consequences — being subjected to the furies of the Twitter Outrage Mob. Regardless, the effort should be made.

I don’t know what the result would be if we managed to surface all the relevant facts and testimony. A full picture might confirm Northam’s version of events, in which case we’d be debating if it was racist to don blackface in a Michael Jackson dance contest — very different from appearing in a photo next to someone in a KKK hood. Or a complete picture might shred Northam’s version, in which case the only question worth asking is if someone deserves forgiveness if the intervening 34 years had been spotless.

This entry was posted in Politics, Scandals and tagged James A. Bacon. Bookmark the permalink.