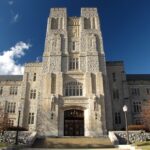 I have long thought of Virginia Tech as the most tolerant of free speech and expression among Virginia’s larger universities. There have been minor eruptions of cancel culture, but nothing as debilitating as the examples we’ve documented elsewhere. Looks like I was wrong.

Speech First, a nonprofit group working to combat free speech restrictions in higher-ed, has filed a lawsuit in the Roanoke federal district court, charging that the administration has created a series of “content-restricting policies and processes that allow the university to police and censor speech they deem ‘biased’ or ‘unwanted.'”

According to the Speech First press release, the lawsuit challenges four specific policies that chill student speech: the University’s discriminatory-harassment policy, its bias-related incidents, its computer policy, and a requirement that students obtain administrative approval to distribute flyers.

Under these policies, students can be disciplined for “unwelcome jokes” – or even being present when such jokes are made and failing to report when such comments are made by another person; sending “partisan, political” emails using the university’s internet; or failing to register to hand out flyers on campus. And through the school’s Bias Response program, students are encouraged to report each other while speculating on the “bias” that may have motivated their peers’ opinions, sowing mistrust and undermining community.

The policies cover speech both on and off campus as well as on social media platforms. Accordingly, students credibly fear disciplinary repercussions “for anything they say or do anytime, anywhere” and censor themselves.

Examples of bias incidents reported during the Fall 2018 semester, included the following, according to the lawsuit:

The university believes it to be “crucial” to respond to bias-incident reports “in a timely and consistent manner,” regardless of whether they violate policy or are “inappropriate or insensitive,” says the lawsuit. It publicizes a protocol of reporting, investigating and responding to incidents, and it encourages students and professors to report incidents if they “hear or see something that feels like a bias incident statement  or expression.”

Continuous promotion of the protocol has had an effect. The number of bias incident complaints has increased from 29 in the spring of 2017, to 35 the next fall, 37 the following spring, and 52 in the fall of 2018.

“Through this elaborate disciplinary apparatus, administrators at Virginia Tech have intimidated students into silence, refraining altogether from expressing comments or viewpoints that might be perceived as controversial or offensive,” said Speech First President Nicole Neily. “This effort to restrict (and even punish) speech based on content goes against the commitment to academic discourse that is supposed to be paramount in higher education.”

The Lawsuit describes the impact on an unidentified Student A, who holds unpopular conservative views but would like to engage in dialogue with other students.

Student A does not fully express himself or talk about certain issues because he fears that sharing his beliefs may be considered “discriminatory harassment.” He fears that other students will find his views “inappropriate” or “intimidating” or claim that his views “interfere with” their educational opportunities. Student A believes that many of the topics that he wants to address could easily be considered “discriminatory” under the University’s definition of “discriminatory harassment.” Student A’s fears are grounded in his own personal experiences on campus. …

Student A also wants to use the University email system to contact other students in support of conservative initiatives and political candidates and to oppose controversial student-government proposals. But Student A refrains because he fears that doing so will be considered a violation of the Acceptable Use Standard and Virginia Tech Policy 7000, and that he will lose his network privileges or even fact disciplinary sanctions.

Roanoke Times reporting on the story can be found here behind a paywall.

This entry was posted in Culture wars, Education (higher ed), Individual rights and tagged James A. Bacon. Bookmark the permalink.