“Equity” and the Performance of Virginia’s Black and White Students

The estimable Jim Bacon suggests that the Northam administration’s emphasis on “equity” and “restorative-justice” is keeping disorderly students in the classroom to the detriment of the other students. As well, he posits that behavior problems are more common among black students so the effect should be larger in divisions with larger black populations.

VDOE has some data that might speak to those issues.

First, the disorder. The Safe Schools Information Resource goes back to 2015. For grades 3-8, the statewide counts there of individual offenders as a percentage of their ethnic population are: 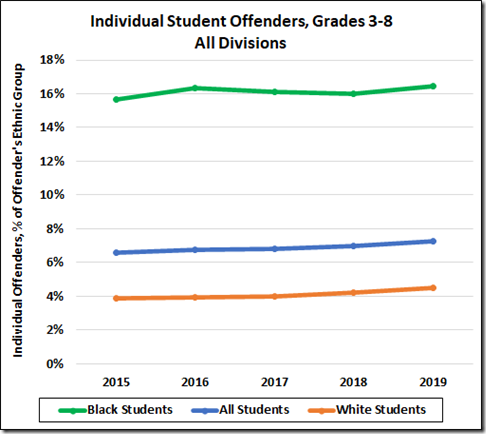 All three rates increased from 2015: All students by 0.7%, black by 0.8%, and white by 0.6%. That is consistent with the Bacon hypothesis and it confounds any notion that the government’s actions are reducing disorder in our schools.

The picture in Richmond is less definitive. 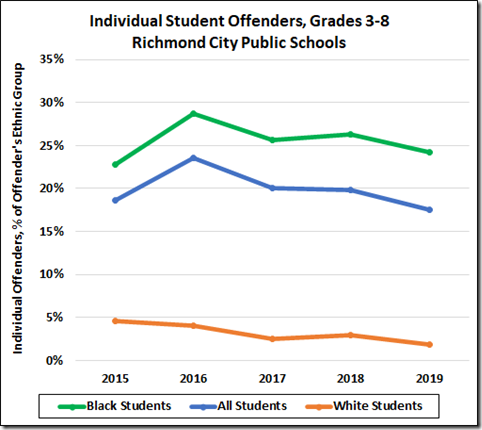 But then there is Fairfax County. 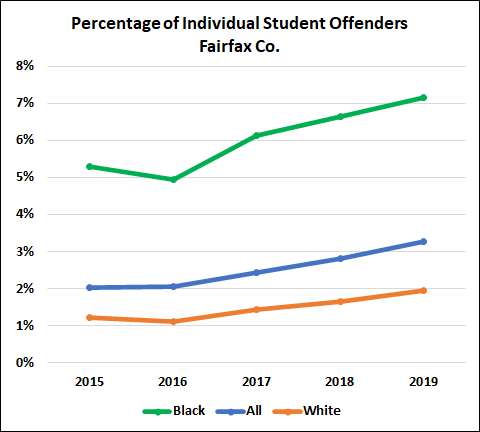 This graph replaces an earlier version. Hat tip to reader WayneS for spotting the error.

It is tempting to assign the huge increases in the offender counts in Fairfax to the emphasis there on “restorative-justice (pdf)” and “equity.” The smaller increases statewide offer a lesser but still enticing temptation. No telling what those Richmond decreases mean but with a 2019 offender rate of 17.5%, 2.4 times the state average of 7.3%, the only sensible inference is that’s it’s past time to move one’s family to one of the nearby counties.

For sure, something awful is going on in Richmond schools and something is getting worse statewide, much worse in Fairfax.

To look for the possibility of an “equity” effect on performance, let’s turn to the SOL pass rates.

The big two SOL tests are reading and math. First, the state average pass rates on the reading tests. 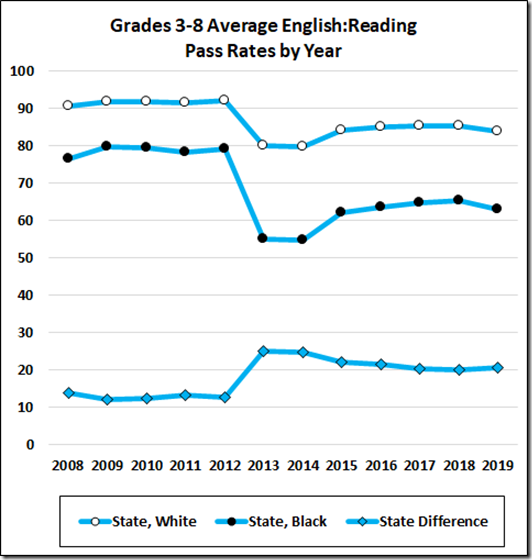 To the point here, these data show slightly improving pass rates for both black and white students in the first years after the new tests but faltering rates in 2019. During the same period, the gap between black and white students improved (decreased) by 4.0 points, a significant amount, albeit virtually all the improvement came during the recovery, such as it was, from the new tests.

On the math tests, the big drop came with new, tougher tests in 2012. More recently, the pass rates were faltering until they enjoyed a bounce in 2019 from newer, easier tests.  Also in the recent period the black/white gap was worsening slightly but improved a bit with the easier tests.

(There’s a template for making the entire school system look better: Just water down the tests every year.) 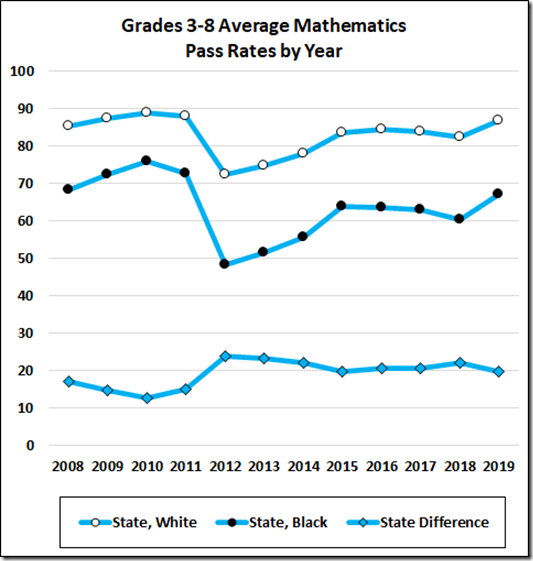 The black/white difference improved by 3.4 points from 2013 to 2019 with, again, most of the improvement coming before the “equity” campaign.

If the Governor has had any effect on pass rates, it’s not obvious here. So let’s turn to a couple of the more interesting divisions.

Richmond has one of the largest percentages of black students in the state. 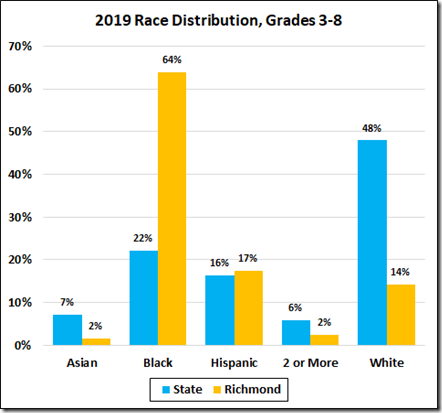 (2019 data. Race group names abbreviated; Am. Indian and Pacific Islander groups both < 0.5% and omitted to simplify the graph). 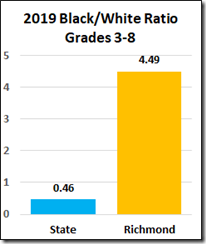 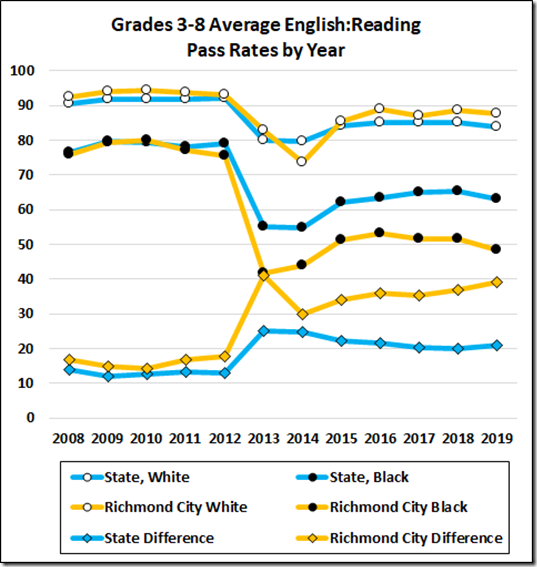 There’s no recent improvement in the Richmond rates; indeed, the (already appalling) rates for the black students have declined some in the last three years while the black/white gap worsened  by 9.5 points. That gap now stands at 39.3, 188% of the state average gap. 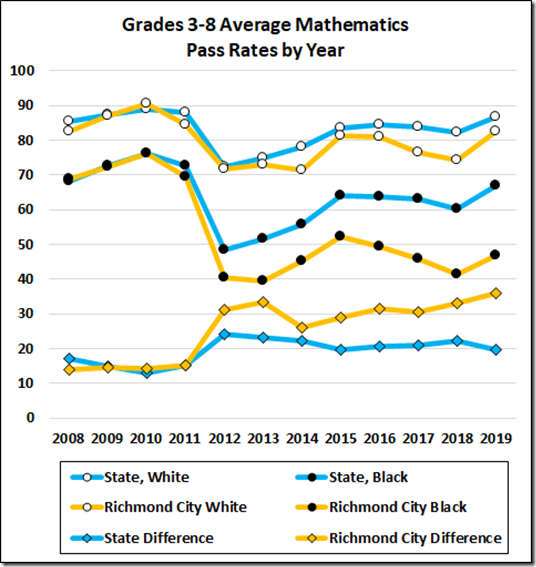 Turning to Fairfax, a County that has been a leader in the restorative-justice (pdf) movement. 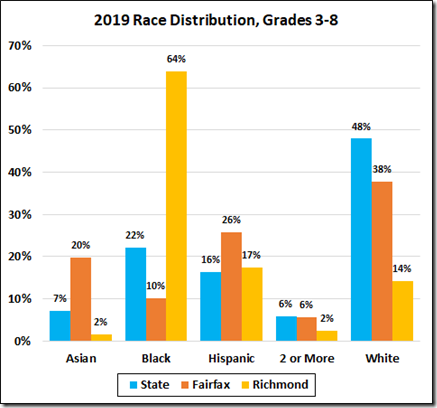 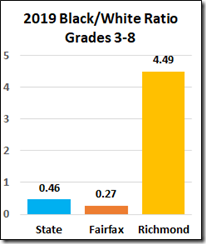 Both black and white students in Fairfax consistently beat the state averages for their groups but the black/white gaps closely track the state numbers. 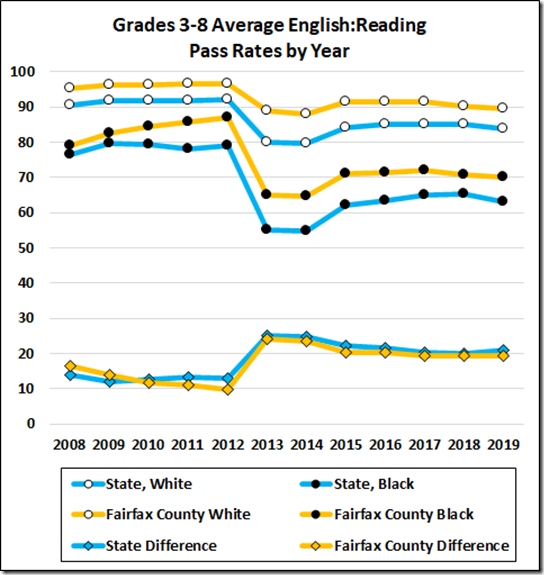 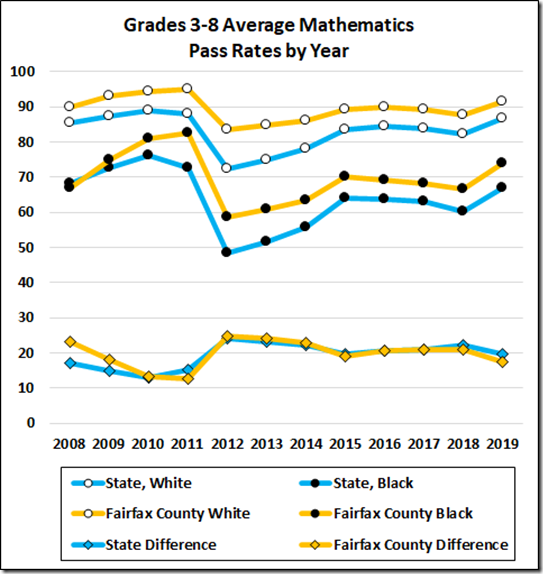 These data suggest that the “equity” movement in the Virginia’s schools has not improved pass rates on the elementary and middle school reading and math tests and has generally failed to halt ongoing deterioration of the black/white rate gaps.

The recent, general decline of these pass rates, except under the new, easier math tests, is consistent with increasing disorder in the classrooms but does not establish a causal relationship.

Because of the very small number of divisions in the sample here, I need to look at the data for all the divisions. Stay tuned.

This entry was posted in Education (K-12), Race and race relations, Uncategorized and tagged Guest contributors. Bookmark the permalink.