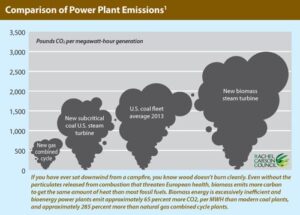 In parts of Virginia, conservation groups are being paid by California to preserve forest land because trees capture the CO2 considered the culprit in global warming. In other parts of Virginia, large swaths of trees are being cut to convert into biomass fuel for European power plants, based on a claim that is a way to reduce CO2 in the atmosphere.

It would be so much easier to accept the climate crisis doomsday scenario if the proponents were not so contradictory and hypocritical. In both cases, the Californians and Europeans are doing this so they can keep pumping CO2-rich emissions into their atmosphere. They obviously don’t really fear CO2.

The case for converting Virginia trees into biomass fuel pellets was made again in this morning’s Richmond Times-Dispatch. Former Environmental Protection Agency director William Reilly is now a corporate director for Enviva, one of the most active companies in the field. His column is here.

“Forest owners who are denied the possibility of selling their trees will simply replace them with soybeans or another profitable land use,” he writes.  True, some will cut all their trees down for a solar farm. Anybody done a true carbon accounting on that? 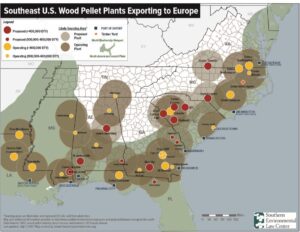 Reilly was clearly writing in response an earlier attack on the biomass environmental claims on the same pages, here. Cindy Elmore from East Carolina University was pointing at Enviva’s efforts to expand its operations in Virginia and just across the line in Norther Carolina:

The only reason why cutting Virginia forests meets the EU standard for greenhouse gas emissions is because emissions are measured only at European power plants. What never gets added to that equation are the effects of the carbon storage that’s lost when trees are cut down, or the carbon emissions from the massive, hot pellet plants, the logging and pellet trucks or from container ships that transport trees across the Atlantic. Even worse, new studies find that burning wood pellets for fuel releases as much as, or even more, carbon dioxide per unit of energy than coal.

Plenty of environmentalists are pushing back on Enviva’s plans to cut so many trees for so worthless an effort. The Southern Environmental Law Center is an opponent, convinced that the use of wood pellets in not carbon neutral, along with the general concerns about loss of the forest land and wildlife habitat. On its web page you can find:

Even within the United Kingdom, where the climate crisis is seen as apocalyptic, this effort is drawing skepticism. This from the BBC a couple of years ago.

Mr Brack says the assumption of carbon neutrality misses out on some crucial issues, including the fact that young trees planted as replacements absorb and store less carbon than the ones that have been burned.

Another major problem is that under UN climate rules, emissions from trees are only counted when they are harvested. However, the US, Canada and Russia do not use this method of accounting so if wood pellets are imported from these countries into the EU, which doesn’t count emissions from burning, the carbon simply goes “missing”.

Yet the practice continues and Enviva and others expand the exports. The trees keep coming down, replaced by seedlings. As part of its efforts to create a 100% renewable tariff to sell to its customers (at a premium), Dominion energy wants to count biomass burned either at pure biomass plants or mixed with coal at coal plants.

This is best kind of virtue signaling, because it works both ways. Keep the trees, give Californians an offset to pump out more emissions, and bask in virtue. Cut down and grind up the trees, let Brits pump more carbon into the troposphere, and bask in virtue. Count your money. When some future politician declares the 100% carbon neutral power goal met, it will be 100% as bogus as this.

This entry was posted in Energy, Environment, Regulation and tagged Stephen D. Haner. Bookmark the permalink.