The capital projects section of the budget bill is often overlooked by the media. That has been especially the case this year, with all the major initiatives brought forth by the Democrats.

I am working on one or more submissions dealing with capital development, but, in the meantime, there is one item that deserves a post of its own. Deep in the back of budget bill (HB 30), in Item C-72, there lurks a proposal of dubious constitutionality involving a lot of money.

The Children’s Hospital of the King’s Daughters (CHKD) is a well-regarded, private nonprofit, free-standing children’s hospital in Norfolk. The budget bill directs that $33.4 million in tax-supported bond proceeds be provided for the construction of a 60-bed mental health hospital at CHKD.

Article IV, Section 16 of the Virginia Constitution prohibits an appropriation of public funds to “any charitable institution which is not owned or controlled by the Commonwealth.” CHKD is a private entity designated as a federal 501 (c ) (3) charitable institution. The proposal is not well drafted in that it is not clear to which agency the bond proceeds are appropriated, but it is clear that the intent is that CHKD receive $33.4 million toward the construction of a children’s mental health hospital. A 2011 opinion of the Attorney General makes it clear that any such appropriation, while “noble in purpose and salutary in effect,” would violate the Constitution.

The AG’s opinion goes on to say that state agencies, as part of carrying out one or more of their functions, can contract with nonprofit organizations for goods or services without being in violation of the Constitution. The budget provision does make the funding for CHKD contingent on the hospital entering into a contract with the state that ensures at least 40% of the new beds “are used to provide treatment services for … unserved or underserved populations with the goal of reducing the need for inpatient treatment at state facilities.” Presumably, the administration felt that this contract contingency would provide protection from the Constitutional prohibition.

That argument seems thin, however. Under the proposed arrangement, the Commonwealth would not be contracting for direct services. Rather, it is seeking to shift some of its anticipated caseload or patients onto the private sector. To encourage the shift, it is offering to pay for part of the costs of constructing a new hospital. The actual services, i.e. the treatment of children admitted to the hospital, would be paid for as they are now. According to its website, “Children’s Hospital of The King’s Daughters is committed to caring for all patients, birth to age 21, without regard to their financial situation.” 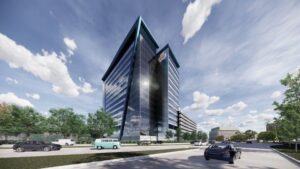 The argument becomes even thinner when one learns that CHKD has announced plans, and had a groundbreaking ceremony in September, attended by the Governor, to build a new 14-story, 60-bed mental health hospital and outpatient treatment center. The projected cost of the new facility is $224 million and it is expected to open in 2022. On the hospital’s website there is no mention of any agreement with the state to share in the cost. Obviously, the hospital felt it could proceed without any commitment from the state. So, the natural question is: What would the Commonwealth be getting for its $33.4 million that it would not otherwise be getting?

This entry was posted in General Assembly, Mental illness and substance abuse, Not-for-profits and tagged Dick Hall-Sizemore. Bookmark the permalink.