Dying for a Photo Op 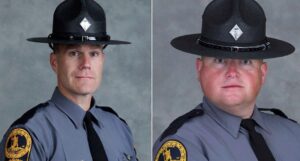 This post has been excerpted from a longer column published in The Republican Standard. — JAB

Two things have always bothered me about Charlottesville 2017.

First, that the political Left never mentions that three people died that day. Yes, we all know the name of Heather Heyer.

But you never see the left or the media mention Jay Cullen and Berke Bates.

They don’t mention Cullen or Bates because they were Virginia State Police officers who died in the line of duty.

That leads me to the second thing that has bothered me ever since.

It is whispered among the men and women in blue, but as in most things, you have to find someone who actually gives a damn to read about it.

You Know Why These Two VSP Troopers Died?

Simple. According to the Independent Review of the 2017 Protest Events in Charlottesville, Virginia, — McAuliffe wanted his photo op: 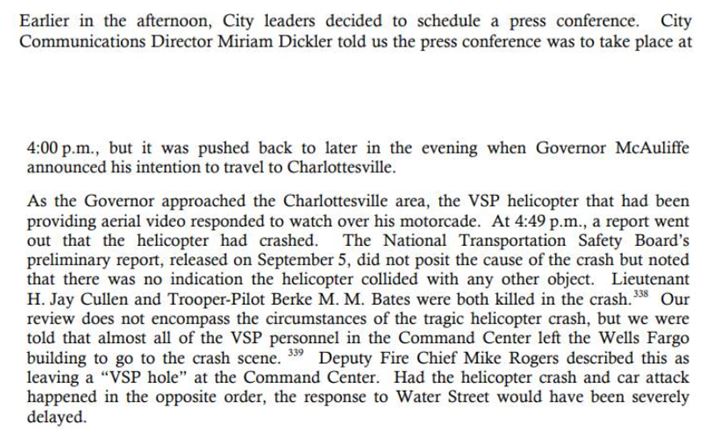 For a press conference, folks.

This from the same Terry McAuliffe backed by Leftists who seek to Defund The Police while intentionally placing them in the way of harm.

For a press conference.

Tell me how any reasonable observer doesn’t come to the direct conclusion that Terry McAuliffe — in pursuit of a photo opportunity — didn’t put those men’s lives on the line in a helicopter with maintenance issues so profound the company involved was finally dismissed in 2020.

The widows of the two slain VSP officers are suing the Commonwealth of Virginia for $50 million thanks to Terry McAuliffe’s rush to treat every crisis as a press opportunity — and another leftist bar tab stapled to the backs of Virginia taxpayers.

What bothers me about all of this — J6, S24, C’ville ‘17 or today — is that too many people seem willing to take law into their own hands as if every issue were exceptional and an existential crisis.

Of course, you have to love the hypocrisy of Democrats who simultaneously seek to defund the police while bemoaning our heroes with US Capitol Police — who then turn around and spit on them whenever the mood suits them.

That’s why you pick up the tab and say thank you when you see LEOs at the restaurant, folks.

Yet it also strikes me that Republicans — when we cheer the riots of January 6th — are putting ourselves at odds with two concepts.

First and foremost, that LEOs are in service to the law — our laws. Like politicians and lawyers, not all LEOs are good. Yet the vast majority go into the profession out of a duty to serve their communities and protect those who cannot protect themselves. It is a boring job, but precisely because we do not take laws into our own hands, this fragile little thing we civilization requires the enforcement of good laws.

Second and perhaps more sublime? Good citizens do not require laws — bad citizens will never be constrained by them.

“Laws are made to instruct the good, and in the hope that there may be no need of them; also to control the bad, whose hardness of heart will not be hindered from crime.”

I would submit that the reason why we live with so many laws isn’t because we have so many lawyers, but rather because we simply don’t know how to live with one another anymore — or better still, we can’t live and let live. Don’t hurt people and don’t take their stuff seems like the basis of any good society, but we can’t even do that anymore.

So here is my parting thought on all of this.

January 6th was not a high water mark for the Republic. We don’t have to imitate the bad guys in order to beat the bad guys. Yet in saying this, the Democrats need to come to grips quickly on the fact that they have been and remain complete and total hypocrites when they slam Republicans on election integrity and stolen elections (Bush won; you lost), violence in politics (BLM/Antifa; any VEA protest), and when and where they choose to set aside process to work around the law (Democrats in the General Assembly and US Senate).

The angrier we are about that the sooner we will be to making the generational leap forward to change the culture that will change our politics. But the ball is entirely in the court of the political Left in this country. What they cannot win by force of argument they attempt to coerce through the argument of force — cancel culture, peer pressure and public shaming.

This entry was posted in Crime , corrections and law enforcement and tagged Shaun Kenney. Bookmark the permalink.