Drive-By Shooter Needs a Long Spell in a Cell 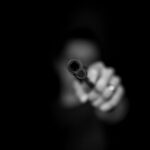 Call me an idealist if you will, but I believe a mother and her daughter ought to be able to go to Lynnhaven Mall on a Monday afternoon in September and drive away without taking a bullet to the neck.

And if someone is convicted of the September 14th shooing of a 33-year-old Beach woman while her 10-year-old daughter watched in horror, I believe that freak ought to spend many years in prison. The second he pulled the trigger he sacrificed his right to live among us.

Perhaps you saw the story in The Virginian-Pilot online edition Thursday. At a hearing in Virginia Beach General District Court that day, the shooting victim identified a 21-year-old man — a known gang member, according to prosecutors — of reaching out of a car window and pointing a gun in her direction.

Next thing she knew, she had a searing pain in her neck and blood was gushing from the wound. The bullet just missed her carotid artery. It could have left a little girl motherless.

In a nearby car, driven by a rival gang member (again, according to prosecutors), a mother and her 5-month-old baby were also hit by gunfire. That mom was a no-show in court this week. The baby is all right, according to the news report.

But we’re not all right. Virginia Beach isn’t all right as long as lunatics cruise the streets and endanger the public.

I have no idea if the man who was arrested for the shooting is guilty. The case is being sent to a grand jury.

But someone did commit a serious crime that afternoon and if there’s a conviction, that criminal deserves no mercy.

The victim is so afraid of retribution by gang members that she asked the newspaper not to print her name. Imagine how she must live, constantly looking over her shoulder, terrified that someone will try to keep her from testifying.

Look, there are two kinds of people in the world. Those who read a newspaper story headlined “Virginia Beach Woman Hit By Alleged Gang Member’s Stray Bullet Offers Emotional Testimony” and are incensed on behalf of all ordinary, decent people.

And those who wring their hands and wonder how society failed the shooter.

In trying to defend his soft-on-crime parole board recently, Gov. Ralph Northam talked about how he believed in second chances.

I do too. For someone who shoplifts, writes a bad check or steals a TV.

But a psycho who sticks a gun out of a car window and fires randomly, unconcerned about killing children and innocent bystanders?

Lock that perp up and keep him there. No second chances.