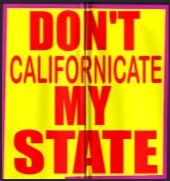 The author was raised in Virginia and attended college here before moving to California. He and his wife have lived in Silicon Valley for 25 years but they follow news in Virginia with great interest. He has consented to let me publish his letter on the condition that I not provide his name.  — JAB

I thoroughly enjoy Bacon’s Rebellion. The fact-driven commentary is extremely refreshing. Virginia’s accelerated drift toward the California educational model is chilling. While my comments do not represent a statistically relevant sample, they do provide a window into the California model.

We currently live in one of the highest-rated, most sought-after school districts in the beautiful state of California. The district is and has been well funded, with material augmentation by a large community foundation that ensures any “hole” in state or school district funding is filled; classroom ratios are among the lowest; and after-school programs abound.

As grandparents, we have the observed the experiences of two of our grandchildren.

Sample one is our grandchild who attended the most desirable elementary school in the district. Based on feedback from her teachers, all seemed extremely positive until the 4th grade, when she decided she wanted to attend the local private middle and high school.

The private school required a standardized test as part of its application process. The test results were a shock. Large holes surfaced in her education, especially in math and logical reasoning. The family mobilized and implemented an intense tutoring regimen to fill the deep gaps. It came as a second shock to find that the public school did not provide grade-performance measures that could be used to compare with private schools. Consequently, the private school did not accept applicants from local public schools.

Skip forward three years. Our grandchild is now attending school in the Midwest and is a High Honors student taking advanced-track courses in math, science, foreign language, and English. It seems that hard work, being challenged, and a heavy homework load have allowed our grandchild to thrive. The journey has been challenging, though, because one never knows when there is a lurking “hole” from the elementary educational platform which must be overcome.

Sample two is equally telling. Our second grandchild attended private elementary school but wanted to attend public middle and high school, which had high state performance rankings. The transition proved challenging in a different way. Having already covered the material, she was bored. Upon reaching the “fantastic” high school, she had the opportunity to take community college courses. But they were either no longer taught or not taught at a challenging level at the high school. Another shocking lesson we learned was that she had to align with the political bias of the teachers to obtain a good grade, without regard to her personal views or free speech. The consequences of failing to comply were harsh.

Every Virginia parent (or grandparent) should fully explore the direction and policy of their children’s schools. Otherwise, they may find their offspring in the same place we observed our grandchildren.