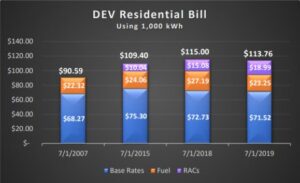 There is no sign, nine weeks out from the big General Assembly election, that the arcane and obscure field of electricity regulation is going to change any votes or win any elections in Virginia in 2019. There is plenty to debate if anybody wanted to in two recent reports now public at the SCC and linked below.

The State Corporation Commission just issued yet another report that Dominion Energy Virginia is reaping massive excess profits, more than half a billion dollars in 2017 and 2018 combined. There is very little chance that the company’s 2.45 million customer accounts (about two thirds of Virginia customers) will see any refunds or price reductions as a result. Prediction number one: The company keeps it all come the 2021 review and base rates do not change.

This is entirely the fault of the General Assembly (with some notable dissenters) and all recent governors, but the sins are bipartisan, the utility campaign contributions happily accepted by both parties and legislative caucuses (hypocrisy thrives), and the math is so dense that economists get rich arguing over it. The 26 percent Dominion price increase since 2007 does not have voters exercised, while the 62 percent price increase for Appalachian Power Company has drawn more complaints. But APCo is not reaping excess profits.

“Excess” profits, returns that exceed the allowed profit margin, is a concept hard for voters to understand. Issues you have to explain are useless. Isn’t that the goal of business? Many of those voters are Dominion employees, stockholders, suppliers or others who will benefit from the transferred wealth. 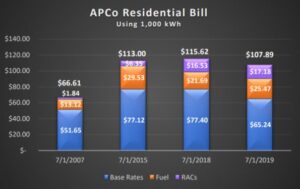 Dominion itself filed an update with the SCC last week repeating its plans for even more expensive capital investments, including one pure political boondoggle, that pumped storage facility proposed way outside its service territory.  The headline was the possible $6.5 billion marginal capital cost of moving more rapidly to retire coal and replace it with natural gas and renewable generation, but the real story is that even the plan with no special effort to reduce carbon emissions has a $33 billion price tag.

Dominion’s report assumes that Virginia will join the Regional Greenhouse Gas Initiative just as soon as the new Democratic majority in the 2020 General Assembly can authorize it, forcing it to early-retire another five coal generators with more than 2 gigawatts of capacity and replace them with new solar and more gas units. But the language in that part of the report is vague and dodgy, leaving Dominion free to retire them anyway – which is hereby officially prediction number two. Those units are toast, Virginia, with or without RGGI.

The RGGI regime demands a 30% reduction in the emission of carbon dioxide (CO2) from Dominion’s generation units by 2030, but the company has announced its own goal of an 80% reduction by 2050. RGGI is passé. Ignore the $33 billion price tag of the no-carbon-reduction Plan A, ignore the $41 billion cost on the Plan B Dominion ties to RGGI, and go straight to the $42 billion Plan C, which the company has given the marketing label of “Sustainable Investment.”  That is where the company plans to go, using our money and blessed by a fully compliant Democrat controlled Assembly.

That’s my prediction number three – the General Assembly Democrats will be all in on more solar and the full 852 megawatts of offshore wind, cost or actual need be damned. Additional support will be bought with the Southwest Virginia pumped storage facility, a pure economic development bribe.

About that RGGI price tag: Dominion sure made it easy in the report to conclude that the $8 billion in Plan B additional costs (and it’s $8 billion, not the reported $6.5 billion) is due to RGGI compliance, but that’s false. The total (p. 13) includes $2.3 billion for the so-called grid transformation, another $400 million for some to-be-named boondoggle underground transmission line, and $1.5 billion more for additional underground distribution lines. That is more than half of the $8 billion marginal cost which is totally unrelated to swapping out generation.

But if RGGI appears to cost $8 billion, and the General Assembly has ordered it, why not spend $1 billion more for the glorious “Sustainable Investment?” The costs of Plan B are jacked up to make Plan C look easy. Plan C will be the counteroffer to roadblock any serious effort to change the regulatory structure and end Dominion’s monopoly. Expect the television ads to start running right after November 5. I’m tempted to predict the ads are in the can and the time on the schedule.

The fourth prediction is the first paragraph. This probably won’t drive many votes. So far there are no signs that any campaign has developed a message on these themes. No one seems to be promising to push for an immediate rate review, with full SCC authority restored to order refunds, cut rates or reject imprudent investments. Certainly, challengers of either party could attack most incumbents for blindly agreeing to utility rent seeking bills, but only by risking the ire of many incumbents in their own party who voted the same way.