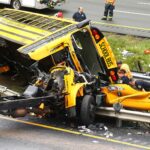 Dominion Energy Virginia’s effort to force its ratepayers to finance a fleet of electric school buses has finally crashed, defeated by the House of Delegates for a third time in the final roll call of the 2021 General Assembly Saturday night.

The 41-49 rejection by the House at about 11 p.m. followed an earlier 46-46 rejection just before 9 p.m. In both cases the House was rejecting near-identical conference reports on Senate Bill 1380, first killed and revived about ten days ago.

In all three cases, the utility had no problem getting exactly what it wanted from its compliant friends in the Virginia Senate, which backed these newest versions of the bill Saturday by 25-12 and 27-12.

Del. Dan Helmer, D-Fairfax, got the final word on the House floor before the final vote. “I think we have a really excellent opportunity to say we need regulatory reform in Virginia,” Helmer told his colleagues in urging rejection of the proposal. That linked this bill’s defeat to the earlier rejection – by those same utility-compliant senators – of a series of reform bills seeking to rebuild State Corporation Commission (SCC) authority over rates.

The first conference report was rejected following opposition speeches and pointed questions from two House Republicans, Del. Charles Poindexter of Franklin County and Del. Lee Ware of Powhatan County. Del. Matthew Fariss, R-Campbell County supported it because he has a company in his district that makes electric buses.

As the revised bill reappeared in the conference reports Saturday, it no longer included a declaration that the utility’s plan to buy 1,000 such buses was “in the public interest.” Proponents, including Del. Richard Sullivan, D-Arlington, claimed that the SCC would have total discretion to accept or reject a Dominion plan to buy the buses and use them as battery storage devices when not transporting children.

At this time, the electric school buses cost about $325,000 each, triple the cost of a fossil-fuel vehicle. The 1,000 buses Dominion was discussing would involve an investment of $325 million, likely to generate a profit of about $33 million annually for the life of the fleet (ten percent return on equity). One way or another, ratepayers would be charged.

The program cost, earlier language that ran roughshod over the SCC, and the defeat of the reforms earned this bill the ire of several key environmental groups. They are all-in on electric buses but believe (correctly) this is a high cost way to get there and might not actually add much value as battery storage.

In its efforts to buy votes from legislators, for example, Dominion promised to scatter the buses around its territory, which could limit their utility as battery storage. Ware asked Sullivan how much power would actually be stored, how many homes it might light during an outage, and Sullivan admitted he had no idea. (That means Dominion lobbyists failed to tell him.)

Even more blatant vote magnets were promises in the new version of the bill to locate a portion of the buses with low-income Title I schools, in urban areas with higher air pollution readings, and then to saddle the program with these employment promises (emphasis added):

The utility shall be required, in building the charging stations and other infrastructure pursuant to this section, and in maintenance thereof, to (i) pay the local prevailing wage rate as determined by the U.S. Secretary of Labor under the provisions of the federal Davis-Bacon Act, 40 U.S.C. § 276 et seq., as amended, to each laborer, workman, electrician, and mechanic the utility employs for the project; (ii) participate in apprenticeship programs that have been certified by the Department of Labor and Industry or the U.S. Department of Labor; (iii) establish preferences for hiring veterans, as that term is defined in § 2.2-2000.1, local workers, women, and workers from historically economically disadvantaged communities for work performed; and (iv) require that the provisions of clauses (i), (ii), and (iii) be included in every subcontract so that the provisions will be binding upon each subcontractor.

Union apprentices. Check. Davis Bacon wages. Check. Hiring preference for low income residents, women and veterans. Check. Same rules imposed on all subcontractors. Check. It is amazing that didn’t get them to 50 House votes from Democrats, and didn’t turn off more Republicans.

The only difference between conference reports number one and two involved ownership of the buses, and only the bus bodies, really. The second would have allowed the school divisions title to the frames and bodies, but Dominion would continue to own the batteries. Without that, how could it earn a profit margin?

It is a wonderful development that so many House members, including many normally right in line with anything that concerns “green” energy, got their backs up and killed this. It was wonderful to hear Sullivan stress on the floor that this stripped out the “in the public interest” diktat and restored SCC authority, “which some of us have long been trying to do.”

Well, not long in his case. He voted for this dog of bill when it did include the “in the public interest” commandment, back on Feb. 18. And he was chief sponsor of the 2020 Virginia Clean Economy Act, filled with SCC mandates and handcuffs to kill off fossil fuel generation in favor of more expensive wind and solar projects. Perhaps he and others have had their Road to Damascus moment. Time will tell.