Does This Highway Need to be Widened to Six Lanes? 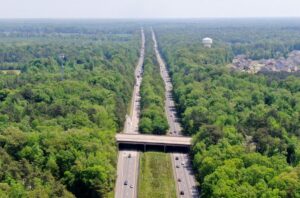 There is a campaign underway to expand a stretch of I-64 from Richmond to James City County.  Currently, the Interstate highway is a four-lane divided highway.  The proposal is to add an additional lane in each direction.

The Department of Transportation estimates the cost of the project at $750 million.

Next came an op-ed piece in the Richmond Times-Dispatch.  The authors of the piece are a venture capitalist, the chairman emeritus of a leading law firm, and the CEO of a marketing research firm.  The piece is a example of boosterism at its finest.  Its headline claims that the expansion of the highway will “create game-changing growth.” The authors claim that the 29-mile “gap” of just four lanes from Richmond through New Kent County to James City County “stands in the way for both the Richmond and Hampton Roads regions to realize their full economic growth potential.”  The interior headlines of their piece announce that eliminating that gap will enable this region of the state to: maximize the economic power of the Port of Virginia; maximize the economic impact of Virginia tourism; maximize the impact of corporate investment; and maximize the opportunity to become a Global Internet Hub.

Finally, there was a push at the recent meeting of the new regional authority established to allocate the revenues from a new regional gasoline tax.  As reported by the Richmond Times-Dispatch, the authority had developed a plan for allocating the $276 million it had available among 30 high priority projects in the region, when the representative from New Kent County asked the body to reconsider the plan and include the widening of I-64 through New Kent.  The county requested a $400 million commitment.  The representatives of Chesterfield and Henrico counties killed that idea.  (Because the number of votes a jurisdiction has is weighted on the basis of population, those counties, together, can control the vote.)

Reading through the article, the reason for this campaign becomes apparent.  According to Shep Miller, the Director of the Virginia Department of Transportation, without some outside funding, the project will not qualify for state funding under the state’s Smart Scale system of scoring projects.  There is a need to lower the unfunded balance in order for it to qualify.  Therefore, he said, “All of us are trying to find ways to cobble enough funding together to get it done.”  The “cobbling” would include any funding earmarked by the General Assembly in the state budget and allocations from the new federal infrastructure bill, as well as regional funding.  Apparently, it is important that the region have some skin in the game.  Carlos Brown, a member of the regional authority and of the Commonwealth Transportation Board, urged a “moral commitment” of up to $100 million.

The Henrico and Chesterfield representatives did not oppose the project itself.  They said they objected because of the last minute maneuvering, saying they felt “ambushed”.  They pledged to “rally around and figure out some sort of funding mechanism.”

There is no question that this stretch of Interstate is crowded in the summer, especially on weekends as people are either heading to the beaches or heading home from the beaches.  It is especially backed up on holiday weekends as drivers coming from the north take the exit from I-295 onto I-64 East near the Bottoms Bridge exit.  Other than that, the traffic flows smoothly.

It is interesting that the authors of the op-ed piece and the New Kent representative on the regional authority cite the same example as to why the expansion is needed—a new distribution center being planned by AutoZone in New Kent County.  As the op-ed explains, “ AutoZone plans to spend $185.2 million to establish an 800,000-square-foot distribution center in New Kent County along I-64, creating 352 new jobs. Trucks will need a congestion-free route along I-64 to transport products to and from the Port of Virginia, and from the distribution center to stores on the East Coast.”  New Kent Supervisor Patricia Page lamented, “New Kent was fortunate enough to get one of the largest warehouses that AutoZone will probably ever build. However, what difference does that make if we cannot get their product into Exit 211?” Something tells me that AutoZone would not have made this commitment if it had not already checked out the highway and was satisfied that it would meet its need to transport products to its various stores in the area.

This campaign has all the hallmarks of being pushed behind the scenes by people who stand to make a good bit of money from the highway’s expansion.

This entry was posted in Economic development, Infrastructure, Transportation and tagged Dick Hall-Sizemore. Bookmark the permalink.