Do We Need More Stimulus — or a Fix for Job-Skill Mismatches? 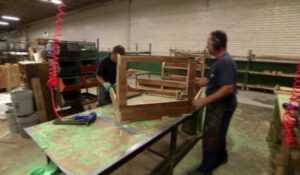 Scene from a Bassett Furniture factory floor in Bassett, Va. As in North Carolina, jobs in Martinsville and Henry County, Virginia’s furniture-manufacturing hub, are going unfilled.

The U.S. unemployment rate in December was 6.7%, way down from its 14.7% peak in April, but still high by historical standards. Thus, it comes as a shock to find that furniture-industry jobs paying as much as $30 an hour for experienced upholsterers are going unfilled.

Tom Barkin, the perambulating president of the Federal Reserve Bank of Richmond, was surprised to discover in his travels through the Fifth District that North Carolina furniture manufacturers were struggling to hire workers. Writing in the current issue of Econ Focus, he describes his conversations.

One executive after another told me his firm had job openings; some listed 40 or more. How could this be, at a time when so many people were hurting — when many thousands of workers in industries like food service and hospitality were out of work?

Perhaps the reason, Barkin theorizes, is that the industry has a bad reputation after a generation of layoffs. Or perhaps the problem is a “mismatch” in the geography and skills of laid-off workers.

Finding answers is critical as the political establishment in Washington, D.C., prepares to do what it does best, which is spend money, in the hopes of goosing the economy with economic “stimulus.” The underlying assumption in the nation’s capital is that the economy’s big problem is a lack of sufficient macro-economic demand. In reality — and this is my observation, not Barkin’s — the problem may be widespread local-level inefficiencies and mismatches that are best addressed locally.

One mismatch is geographic: A sizable share of those workers who have been laid off are in larger cities with bigger leisure and hospitality sectors. They may have ties to where they live and understandably feel reluctant to move to a smaller manufacturing town.

A second mismatch is skill. I heard at our roundtable that experienced upholsterers can make up to $30 an hour. But just to get into that field, a worker needs to go through an initial training program at the community college that takes six months, followed by significant on-the-job training. So someone who has lost his or her job on the service staff of a restaurant cannot immediately take a skilled, well-paying job in furniture making. And with the prospect for an end to the pandemic just a few months away, they may not be motivated to make the investment needed to reskill themselves.

Give Governor Ralph Northam credit for trying to address the community-college affordability issue. Whether anything useful comes out of Washington, however, is a different question. The CARES Act enacted during the Trump administration addressed none of these local mismatches, and it doesn’t appear that President Biden’s proposed $1.9 trillion stimulus package will do anything more than shower money on people while expecting nothing in return. It takes a sense of urgency to motivate people to commit the time and effort to learn new skills and/or move to new places. Giving them free money does not nudge them out of their lethargy zone.

Indiscriminately helicoptering free money to individuals and businesses seems to be the way the U.S. does things now. The country would be better served by doing the hard work of addressing local inefficiencies and mismatches.