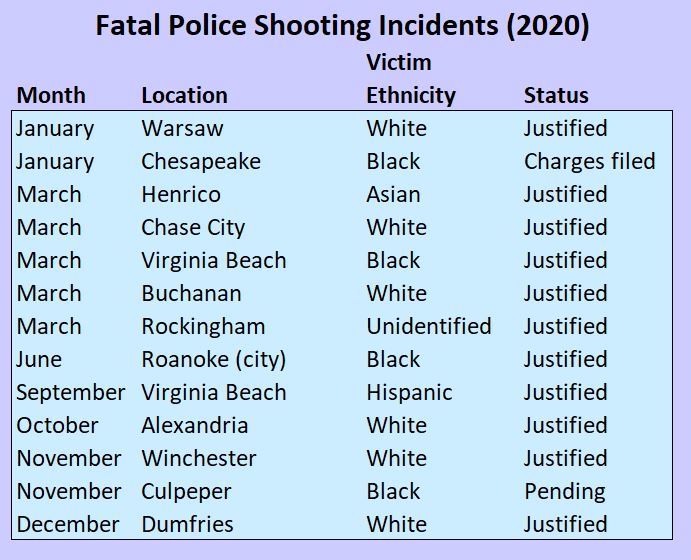 As protesters marched in many Virginia cities last year in protest of the police killing of George Floyd in Minneapolis, Minn., many Virginia politicians suggested that the kind of police abuses occurring in other states were endemic here in Virginia. The General Assembly enacted numerous laws to reduce mass incarceration and curtail perceived police abuses. All the protests and lawmaking occurred in a factual vacuum, however. Was there any truth to the proposition that Blacks were more likely than Whites to be killed by police here in Virginia? Is law enforcement in Virginia “systemically racist”? No one provided any data to confirm or falsify the proposition.

Data does exist. The Virginia State Police published Monday its “Crime in Virginia 2020” report. The report devotes a section to officer-involved shootings, of which there were 13 resulting in fatalities and 19 in injuries. The report does not identify the race of the police shooting victims, but by cross-referencing the published information with the Washington Post police shootings database, I was able to identify the race/ethnicity of 12 of the 13 men (they were all men) killed by police. Six were White, four Black, one Hispanic, and one Asian.

Do those numbers support the conclusion that police are more likely to resort to deadly violence against Blacks than Whites? It depends on what you use as your yardstick for comparison.

If you compare the percentage breakdown of shooting fatalities by race (among the victims whose race was identified) with the percentage of that race in Virginia’s population, there does appear to be a disparity.

By this measure, Whites and Hispanics were less likely to be victims of police killings, while Blacks and Asians were more likely. But there are two big caveats to the use of these numbers. First, the tiny sample size magnifies the variability in percentages from year to year. (For example, it is exceedingly rare for Asians to have violent encounters with police. In 2020 their percentage was 8%. In other years, the percentage is more likely to be zero.)

Second, the size of the general population is not a relevant basis for comparison. Ideally, we would express the number of police-involved killings as a ratio of persons who resist arresting arrest or threatening an officer. But the “Crime in Virginia 2020” report does not track those numbers.

A reasonable proxy for potentially violent interactions with the police is the number of arrests for Class A crimes (which combine crimes against persons, property and society). “Crime in Virginia 2020” does break down that number for Blacks, Whites, and Asians — but it complicates comparisons by not including Hispanics. StatisticalAtlas.com cites data indicating that 65% of Virginia Hispanics identify racially as White, 4% as Black, and 30% as other. I have adjusted the percentages accordingly below. (I have excluded the one Hispanic victim because I do not know which race he identified with. Statistically speaking, the odds are that he considered himself White, but we don’t know that.)

This is just a one-year snapshot based on a very small sample size, so any conclusions must be regarded as tentative. Was 2020 an aberration? It might be useful to look at, say, five years’ worth of police-involved shootings to draw upon a bigger sample size and reduce the potential for random year-to-year variability. Be that as it may, the 2020 numbers certainly do not support the widely held notion of racial bias in the police deployment of force — not in Virginia at least.