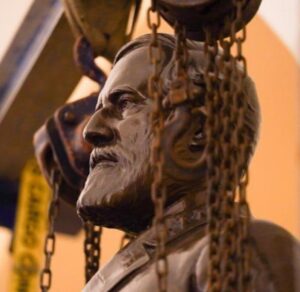 The Lee statue being removed from the U.S. Capitol building.

Let us all praise Virginia’s Department of Historic Resources. The department may be part of the culture-cleansing machine taking down historical statues and moving them to locales where they don’t offend people, but at least it is looking out for the taxpayer.

The Northam administration, acting through DHR, made national news last December when a statue of Robert E. Lee was removed from the National Statuary Hall Collection of the U.S., Capitol and relocated to a Richmond storage facility. But news accounts, such as this Associated Press piece, didn’t tell the story behind the story.

DHR arranged for the removal and transport of the statue to Richmond for $11,700. Let that serve as a benchmark for appraising the procurement policies of governments and universities carrying out their purges. (For background, see Carol Bova’s recent article, “Making Money from Cultural Cleansing.”)

In her digging through state procurement files, Carol came across DHR’s statement of work as follows:

The Department of Historic Resources will purchase services from a qualified contractor in order to safely transport the Robert E. Lee statue and based, located in the crypt of the US Capitol located First St. SE, Washington, DC 2004 to the Virginia Museum of History and Culture. The contractor will perform the services necessary to successfully transport and keep safe the statue by adhering to the components listed below….

The contract submitted by Hutchinson International Corp., of Beltsville, Md., filled in the details:

We will provide Men, Tools, and Equipment to remove noted statue from Crypt U.S. Capital Building. We will provide basic skid, then load & secure in our van take to our secured facility store until the following Monday. Then we will haul to above mentioned site. The Statue & Base will be unloaded at the dock. The stone base will be taken to storage room adjacent to the loading dock, down the short ramp. Then the statue via elevator will be taken to 2nd floor and will be placed as directed for the sum of $ 11,700.00 Eleven Thousand Seven Hundred Dollars & no cents.

No two statue removals are identical. Some statues are bigger than others. Some contracts call for removing the statues but not the pedestals. Some contracts entail moving multiple statues. Regardless, costs don’t vary by a factor of twenty to one hundred.

When Richmond Mayor Levar Stoney paid contractor NAH, LLC, $1.8 million to remove a dozen statues, cannons and other memorials last year, at least he had the excuse that protestors were threatening to burn down the city and he didn’t have time to abide by the usual procurement policies.

What excuse did the City of Charlottesville have for paying $1 million to remove three statues — of Robert E Lee; Stonewall Jackson; and Lewis, Clark and Sacagawea? There were no protests. Time was not of the essence.

What excuse did the University of Virginia have for paying $430,000 to remove the statue of George Rogers Clark and stone pedestal? No protests, no time pressure.

What excuse did the Virginia Military Institute have for paying $209,000 to take down the statue of Stonewall Jackson? Again, no protests, no time pressure.

Being woke doesn’t have to mean squandering tax dollars as well as expunging memorials to dead white men. Let’s give a polite round of applause to the Department of Historical Resources’ procurement officer Madrika Martin. Public servants who do a good job deserve our recognition.