Last week the University of Virginia Board of Visitors held a workshop to discuss next year’s increase in tuition, fees, and other charges and to hear input from the public — mostly students begging the board for relief from the ever-escalating cost of attendance.

A PowerPoint presentation released at the meeting essentially made the case for hiking tuition again, although the exact percentage will depend upon the level of financial support provided by the Commonwealth. The estimated increase for undergraduate, in-state tuition will range between 0% and 3.1%. Additional fees are set at $114.

The presentation reflects the Ryan administration’s spin on the numbers. It’s the job of the Board of Visitors to probe deeper. In this post, I will first summarize the administration’s stats, and then I will provide some numbers that the board should consider as it ponders the tuition increases.

“Tuition is last resort,” states a slide expressing UVa’s tuition philosophy. “[We first] look to other revenues and savings.”

We’ll see about that.

In one slide in the presentation, the Ryan team makes four broad claims about the “changing relationship between state appropriation and tuition in funding educational costs (2020):

In another slide, the administration provides this graphic that shows how tuition and state funds are spent: 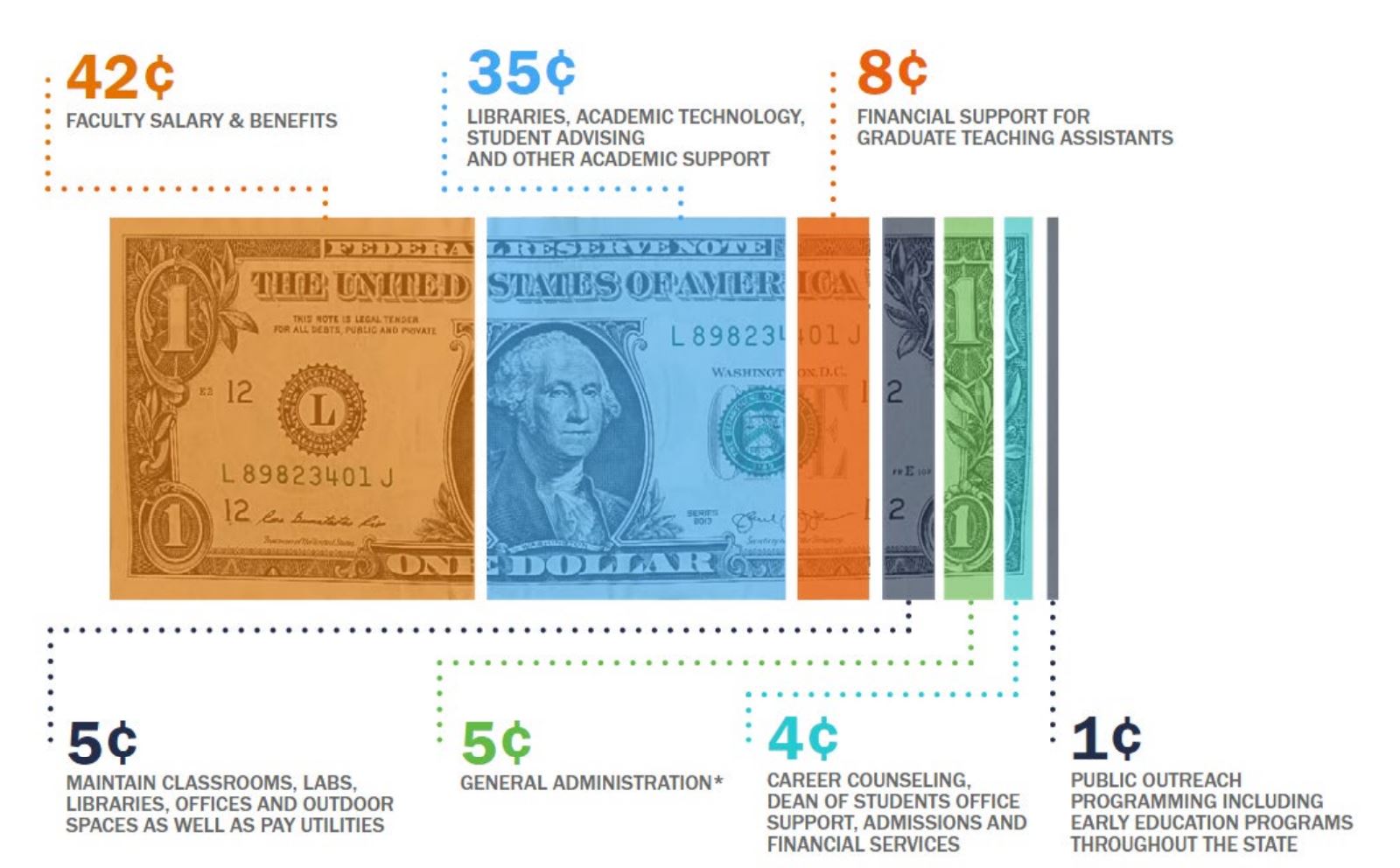 And in a third slide, the administration summarizes 2021-22 “operating challenges and opportunities.”

What does a base undergraduate tuition increase generate (net)?

What cost increases are we facing?

If I served on the Board of Visitors (fat chance!), my reaction would be, “Thank you very much, but I find these numbers almost worthless for understanding the forces pushing tuition and fees higher. Indeed, it strikes me that you are deliberately obscuring what’s going on.”

The first tip-off should be the administration’s selection of a 30-year time scale for purposes of comparison. Why 30 years? What about the past five years? Is the Ryan administration really blaming cost increases of the last few years upon funding shortfalls of 20 to 30 years ago?

The second tip-off is the lack of long-term spending data. If tuition and state support has failed to keep up with spending, the problem may not be meager increases in tuition and state support but runaway spending. Let’s take a look at some less-ancient numbers extracted from UVa annual reports, comparing FY 2015 and FY 2020. (These numbers include the College at Wise and exclude the UVa health system.) 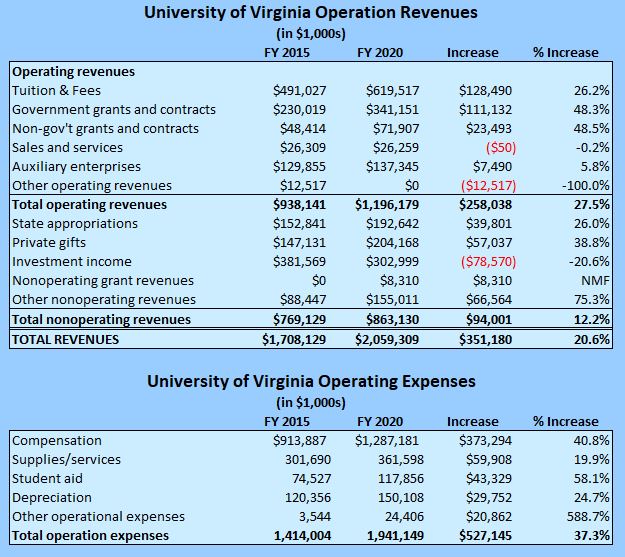 The first thing we observe is that spending on operational costs increased 37.3% — far outpacing the 10.9% increase in the consumer price index over the same period. Right off the bat, spending looks like the No. 1 culprit.

Although the General Assembly did cut state appropriations after the 2007-2008 recession, over the past five years the legislature has increased state support by $39.8 million, or 26%. There is no reasonable way that President Ryan can blame a shortfall in state appropriations during his time in office. The percentage increase in state appropriations, by the way, was almost identical to the 26.2% increase in tuition and fees over the same period. Perhaps there were valid excuses for jacking up tuition & fees a decade ago, but it’s hard to see the justification now.

If we look at the source of spending increases, we see that it overwhelmingly comes from increased compensation. Compensation accounts for 70% of the increase over the five-year period. A significant contributor likely was UVa’s decision to boost the minimum wage to a “living wage” of $15 per hour, a boost that benefited thousands of employees. If that’s the case, why doesn’t the UVa administration honestly ascribe the cost pressure to implementing the living wage rather than blame it on state funding shortfalls?

The PowerPoint suggests that compensation will be a big cost driver next year. Providing a 3.5% “merit” raise for “all faculty/staff” would cost $38.6 million. My question as a board member would be this: Since when is a “merit” raise granted to “all” employees? That sounds like a general raise — well in excess of inflation. If it’s not a general raise, can we infer that the raise will be distributed unequally according to criteria of merit? In other words, will some people get bigger pay raises than others? What is the maximum merit raise?

As for that dollar-sign graphic showing where the money goes, I would dig deeper. The graphic indicates that only 5% of academic dollars goes to “general administration.” That sounds reasonable on the face of it. But what’s included in “general administration”? Read closely, and you’ll find that it excludes such non-instructional costs as admissions, financial services, and the dean of students office. It also excludes IT (academic technology), student advising, and “other” academic support. It may or may not include administrative employees at the departmental level.

Here are some other things we don’t know from this presentation:

If a third-year Commerce School student accepted the UVa administration’s numbers at face value in a business case analysis, he’d flunk the class. We expect the Board of Visitors to do better. Demand the data, and then provide it to students, families, taxpayers, alumni and the general public to digest.

This entry was posted in Budgets, Education (higher ed), Uncategorized and tagged James A. Bacon, University of Virginia. Bookmark the permalink.