Critical Race Theorists reject colorblindness and equality and they center their goals on equal outcomes (equity) rather than equal opportunity. Merit-based individualism is replaced with group-think collectivism and the dominant white culture is a privileged oppressor.

What the public doesn’t understand is that CRT is already here in Virginia Beach.

Teachers won’t speak on the record but I have spoken to them about what is really happening in their professional development meetings.

In February, more than 50 elementary school teachers in Virginia Beach participated in a mandatory meeting entitled “Advancing Equity Through Continuous Reflection.” In the meeting, a video told the teachers that “One of the most freeing things that white people can do or any human being on the planet can do right now is to say ‘of course I’m racist’. Our society speaks racism. It has spoken racism since we were born. OF COURSE YOU ARE RACIST.”

Yes, that was a part of this compulsory training for teachers.  I was also informed about a book study conducted at Lynnhaven Middle School in Virginia Beach this school year. Approximately 25 teachers from a leadership team at the school were told to read a book called “The Racial Healing Handbook.” Some topics in the book are “religious privilege, white privilege/white supremacy, adultism.”

The book also denounces “adultism” and states that “Adultism is the oppression of children, adolescents, and those who are perceived as young in society.” “Adultism manifests in the idea that children and adolescents must be controlled and don’t have agency over their own bodies and decisions.”

This idea that attacks parental rights could lead down a dangerous path. Should a 12-year-old be able to give sexual consent or make the decision to have an abortion?

By the way, the citizens of Virginia Beach paid for this book through taxpayer funds.

The School Board received a letter from a group of 16 teachers who participated in the Racial Healing Handbook study. They were upset that their book study was made public and that initially it was stopped. However, after the Superintendent went to the school to meet with these teachers, rather than canceling the study, he put it on “pause.”

I also know that a number of teachers were upset about being told to read the book and participate in the meetings but they felt that they couldn’t speak against it for fear of retaliation.

I am no lawyer but it seems that these trainings would be a violation of a teacher’s civil rights.

My colleague, Carolyn Weems, recently submitted a resolution to the School Board Chair and Vice-Chair that would ban things such as the Racial Healing Handbook and and other Critical Race Theory ideas. They refused to put the resolution on the agenda in advance of the last meeting saying that it could cause misinformation and anxiety for the public.

However, the resolution to “Clarify Equity Training and Teaching” will be on the agenda for a vote on June 8th. Many Virginia Beach School Board members have indicated that they support the Racial Healing Handbook being used and would not support the Weems’ resolution.

If you want “The Racial Healing Handbook” types of teachings and trainings to be banned from Virginia Beach Public Schools, please add this to your calendar to attend the meeting on June 8th .

Please also plan to speak on the topic in support of the Weems’ Resolution.

The agenda will be posted and sign-ups to speak will begin on June 2nd.

There is also a rally in support of the resolution planned for 5pm on June 8th in front of the School Administration building. 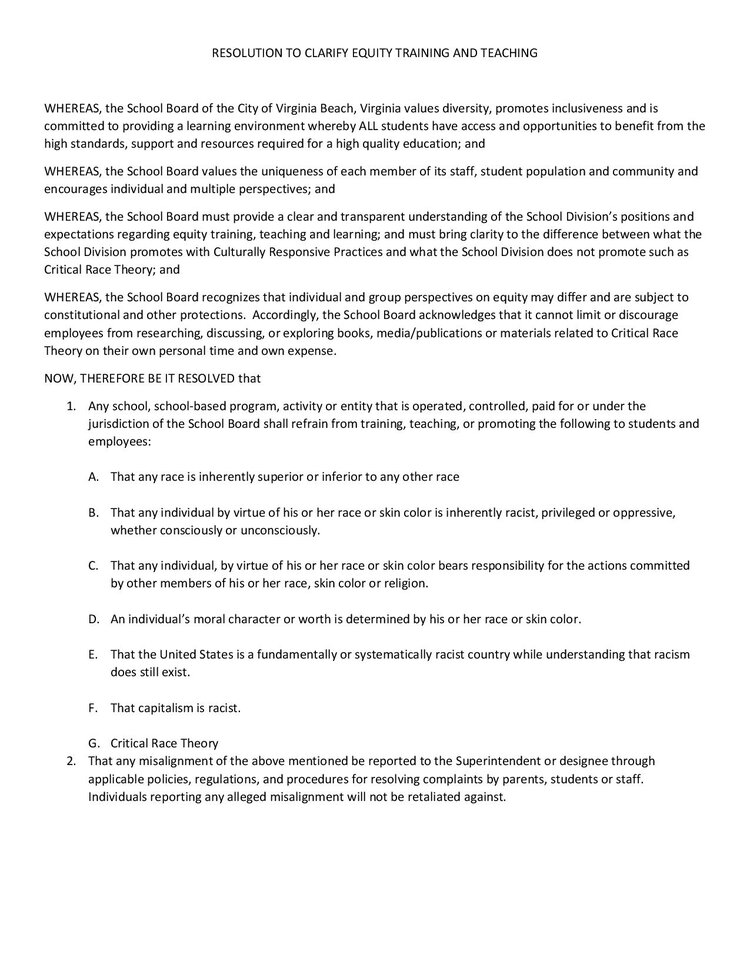