COVID: Is It Time to Start Panicking Again? 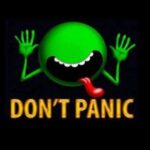 COVID-19 is moving faster than we can keep up with. The headline news from the Centers for Disease Control and Prevention, based on a study of an outbreak in Massachusetts, is that vaccinated people are just as likely to spread the highly contagious Delta variant of virus as unvaccinated people. The vaccinated are far more resistant to the disease, but they’re just as likely to spread it.

What the heck do we make of that?

For example, how does this new finding impact mandated-vaccination policies in universities and many places of employment on the grounds that the unvaccinated pose a significant transmission risk to others? If vaxxed and unvaxxed are just as likely to be plague vectors, what’s the public-good justification for requiring vaccinations?

In another issue, the CDC argues that everyone should start wearing masks again. Personally, I don’t feel that masks assault my civil liberties, and I’ve made the decision to start wearing them again in public places. I’m vaccinated, so I don’t feel particularly at risk. If I do get the virus, odds are that I won’t even know it, and if I do, it will be like a bad cold. But if there’s a chance that I could carry and spread the virus to others, I feel a responsibility to the community to wear a mask.

That’s what conservatives do — they exercise personal responsibility. They don’t think just about themselves but consider the impact of their actions on the community.

However, the masking calculus is very different for school children. Aside from the fact that young children are naturally resistant, there’s a big difference between wearing a mask for short trips to the pharmacy or the grocery store and being compelled to wear a mask all day at school. All-day mask wearing causes an entirely different set of risks, which people lose sight of when they fixate exclusively on COVID.

Meanwhile, there’s the COVID-19 news from the United Kingdom. A wave of Delta-driven spread appears to be receding. The seven-day average of new cases is down 40% from its recent peak. Observers suggest that the combination of a high vaccination rate and high number of previously infected people carrying antibodies may account for the decline. Having ripped through the modest percentage of the population without antibodies, Delta is running out of new people to infect. That’s the theory, at least. Nobody really knows. But I will say this: Former FDA Director Scott Gottlieb predicted exactly this outcome.

Until we have reason to think otherwise, the U.K.’s experience suggests that there’s no cause to reinstitute the lockdowns. Before ordering the same draconian measures that crippled the economy and aggravated the burgeoning mental health crisis, let’s follow the data insofar as we can.

That starts with knowing what we don’t know. As the Wall Street Journal’s Holman W. Jenkins Jr. points out, the U.K. is doing something that the U.S. isn’t: It is conducting biweekly blood sample surveys to get a statistically valid measure of how prevalent COVID-19 antibodies are in the population, whether from vaccinations or previous infections. In the U.K., says Jenkins, the Brits estimate that 92% of the population has evidence of antibodies. No wonder the Delta spread is slowing.

In the U.S., we can only guess what percentage of the population has some degree of immunity. The Northam administration could begin implementing such a sampling program in Virginia even if the Biden administration does not. What’s stopping us?

In the meantime, we are left with imperfect measures. What matters more than the number of people asking to be tested and being found positive — which can be influenced by how alarming cable news is on any given day — is how many people are being hospitalized from the virus. If someone shows no symptoms or gets flu-like symptoms, why do we care? It matters only if the virus progresses to the point where peoples’ health is severely effected. Accordingly, as I argued last year, the most useful data to track is hospitalizations. When hospitalizations increase, you know something bad is happening.

There are different ways to display the Virginia hospitalization data. One will scare your pants off. The other won’t. Here’s the scare-your-pants off version, which you see if you click on the “COVID-19 in Virginia: Cases” tab. 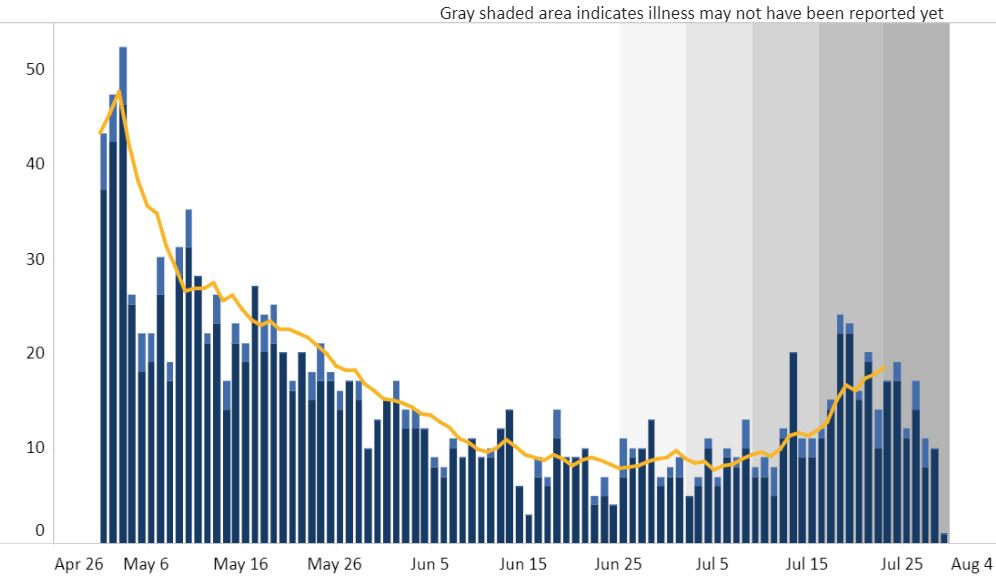 But here’s what you see if you view the data from the beginning of the pandemic: 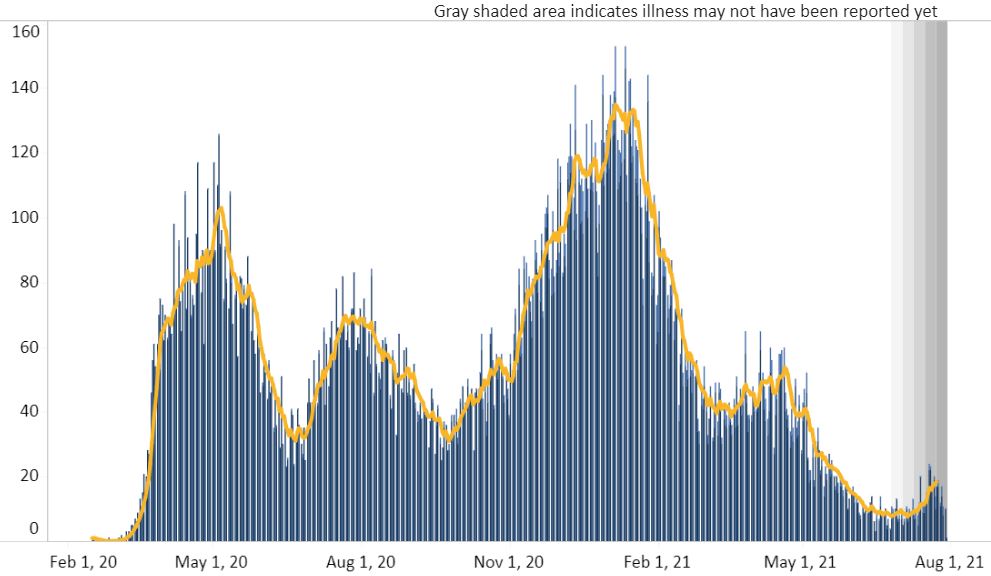 If you break down hospitalizations by region, as the VDH database allows you to do, you get yet another story. In “Central Virginia” (dominated by the Richmond metropolitan area) the seven-day moving average of hospitalizations has ranged between one and two per day. The numbers in other regions are higher, though not by much.

Be careful. But in the immortal words of Douglas Adams in “The Hitchhikers Guide to the Galaxy,” DON’T PANIC!