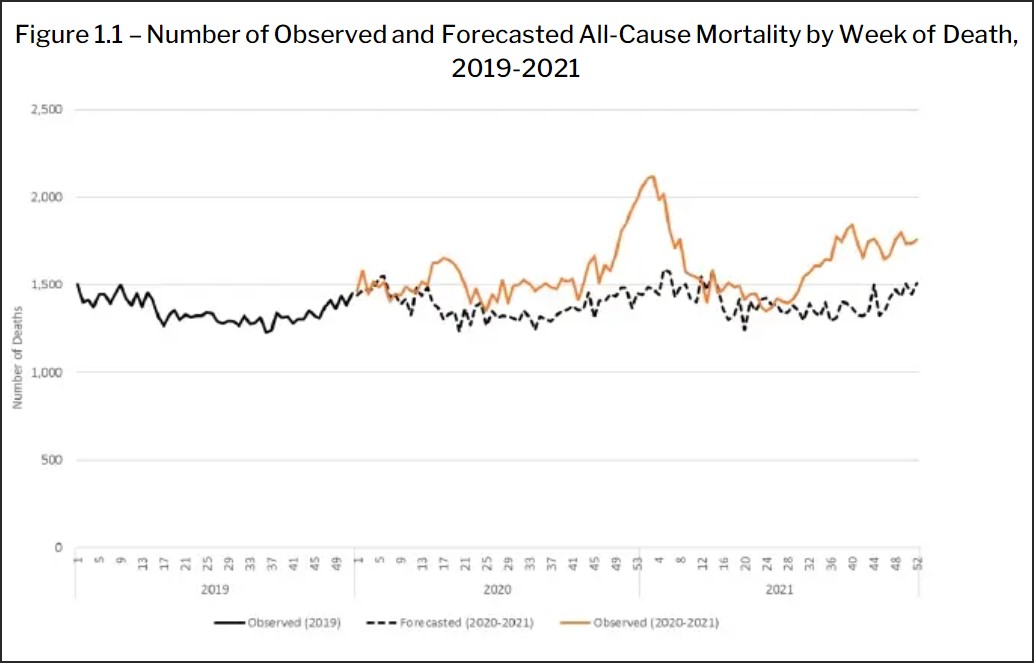 The number of deaths in Virginia during the COVID-19 pandemic (2020 and 2021) was roughly 15,000 higher, or 22.5%, than would have been predicted from pre-COVID trends, according to a new report published by the Virginia Department of Health. However, COVID accounted for a bit less than half (47%) of the excess deaths.

Deaths attributable to accidents, homicides, liver disease, diabetes, hypertension and renal disease all increased more than 20% as well. On the other hand, the pandemic saw a decline in fatalities due to influenza and pneumonia, sepsis, and chronic respiratory disease.

Major conclusions from the study:

Death rates among people who received at least one dose of COVID-19 vaccine were much lower than death rates among Virginia residents and people who did not have any recorded dose of COVID-19 vaccine. The all-cause standardized death rate in 2021 was 2.7 times higher for Virginia residents with no recorded dose (1,390.5) than for people who received at least one dose (507.2). However, the disparity varied by age group. For most age groups, the death rate among unvaccinated people was two to four times higher than that of vaccinated people.

“While it is clear that a large number of lives were lost due to direct effects of COVID-19 disease, a preliminary study suggests that other factors were involved as well,” said State Health Commissioner Colin Greene in a press release. “During the pandemic, many Virginians faced the loss of economic livelihood, education, entertainment, and access to routine healthcare, as well as family, social and spiritual support. Gaining meaningful knowledge of the effects of these and other variables will require more deliberate study and multiorganizational collaboration.”

Virginia is the first state in the U.S. to complete a full study on the increased rate of non-COVID deaths during the pandemic, said Delegate Karen Greenhalgh, R-Virginia Beach, who had requested the report. “Only by balancing the immediate health risks with long-term health outcomes, economic outcomes and individual liberty can we operate as a constitutional Republic,” she said.