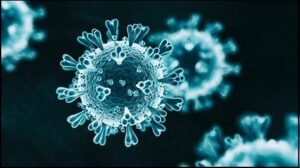 A recent Columbia University study generated headlines after concluding that 55% of deaths reported as of May 3 could have been avoided if stricter social-distancing controls had been implemented nationally just one week earlier.

Responding to that story, President Trump created a mini-furor by engaging in his usual ad hominem attacks. Rather than addressing the underlying facts and logic in the study, he called Columbia a “liberal, disgraceful institution” — as if labeling the institution ideologically did anything to rebut the rigor of the study.

A nuanced critic of the study might have questioned the validity of using epidemiological models to run counter-factual simulations. The outcome of models like the one used by the Columbia authors depends upon an array of critical assumptions — often debatable — about the relationship between different variables. As the old saying goes, Garbage In, Garbage Out.

Whatever the merits of the particular study in question, the flap revealed that the U.S. academic and media establishments now accept counter-factual simulations as legitimate news. Perhaps someone could build a model to answer a different counter-factual question: Given the fact that most COVID-19 deaths have involved elderly patients with one or more coexisting conditions, how many would have died anyway?

It’s one thing to ask how many lives were lost, as the Columbia study did. It’s another to ask how many years of life were lost. That is a question which, in other contexts, liberal academicians have dwelled upon.

It is widely accepted that, all other factors being equal, the premature death of, say, a 35-year-old is more tragic than the demise of an 85-year-old Alzheimer’s patient with severe respiratory ailments. The thinking behind the so-called “death panels” of the Affordable Care Act was that society does not have the resources to prolong every person’s life indefinitely, even if it were medically feasible to do so. If we must ration resources, we should apply rational criteria to our decision making. It does not make sense to spend wildly disproportionate sums on extending the life of an elderly person with multiple chronic conditions who is likely to die soon regardless.

Suddenly, such thinking is nowhere to be found in the debate over COVID-19. Politics have turned all logic upside down. The current thinking on the left side of the political spectrum now is that every life is precious, and that society should act to bend every effort to save lives — no matter the cost. Any insinuation that one should put saving jobs over saving lives is deemed a moral abomination.

Even in a world polarized between the forces of Trump and anti-Trump, there does seem to be widespread agreement — mainly because the facts are incontestable — that there is a powerful correlation between a COVID-19 patient’s age and his or her likelihood to die from the disease. There is also widespread agreement that people with co-existing conditions such as diabetes, obesity, respiratory illness, and heart disease — are at heightened risk of mortality. The more preexisting conditions a person has, the greater the risk he is of dying from exposure to the virus.

We cannot tell from the Virginia Department of Health data how many Virginians who died from COVID-19 had underlying health conditions. But we can say two things without fear of contradiction. First, while people of all ages are susceptible to being infected by the virus…. 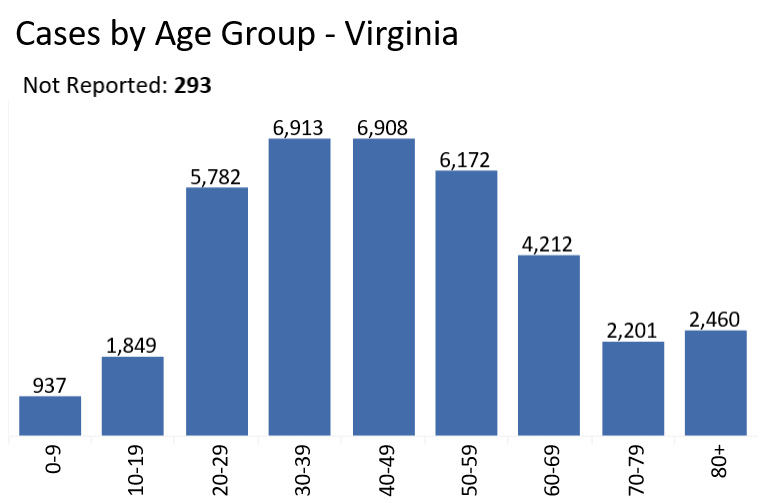 … deaths are closely correlated with age. 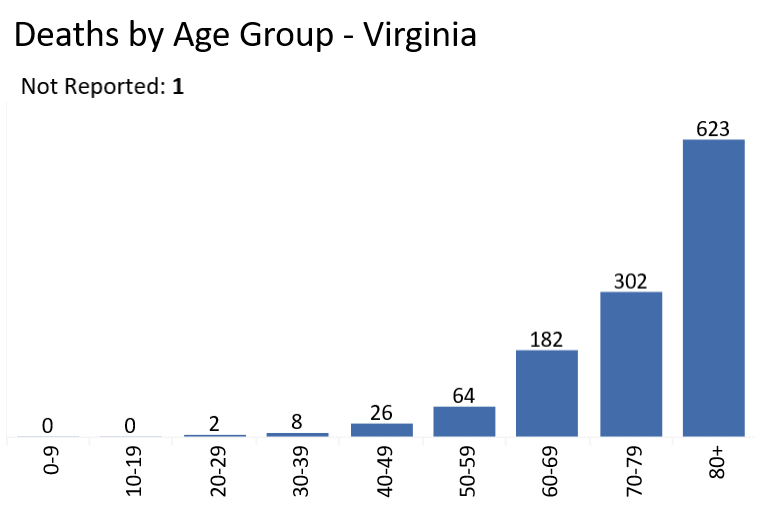 An important question is whether age is the driving factor behind mortality or whether age is highly correlated with other factors associated with age, such as the prevalence of heart and respiratory disease. It is possible for both explanations to be true. The elderly may have more preexisting conditions and, by virtue of their age, also have weaker immunological systems.

Sixty percent of COVID-19 deaths in Virginia involved residents of long-term care facilities. With nursing homes, like the Hotel California, you can check in but you can never leave. The average length of stay in a long-term care facility nationally is 2.6 years for females and 2.3 years for males. If the new coronavirus hadn’t done them in, something else would have — and in relatively short order.

I share the conviction that an important measure of a society is how well it takes care of its older people. We need to expend every reasonable effort to keep the most vulnerable among us safe from harm. So far, we have done a dismal job. But saving the lives of the elderly is not an absolute value for which everything else must be sacrificed. Life is full of difficult trade-offs. When we seek the appropriate balance between “saving lives” and “saving jobs” we should give appropriate weight to those who have many years to live and those who don’t.