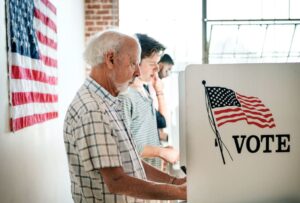 I put little stock in the election prognostications of professional pundits, the vast majority of whom are guilty of wishful thinking and confirmation bias. But it is election day today, and the conventional wisdom is that the Virginians will vote handily for Joe Biden as president, Mark Warner will spank his Republican challenger for the U.S. Senate, and Democrats might even gain a House seat. So, when I see a contrary analysis, I take a look. I don’t necessarily give it any credence, but I like to chew it over.

The following analysis originates from Bob Marshall, a former member of the Virginia House of Delegates known as the most conservative elected official in the legislature at the time. So, insofar as wishful thinking and confirmation bias factor into his thinking, they push Marshall toward favoring a Republican outcome. Take his observations with a grain of salt.

Based upon its analysis of early voters, Target Smart, a Democrat-leaning, Washington, D.C.-based election data firm, has concluded that President Trump can win Virginia, Marshall writes.

Based on past performance, 53% of Virginians who will vote have already voted, leaving 46% to vote today (leaving 1% with no opinion).

“In short,” writes Marshall, “Target Smart concludes that President Trump is looking at a four-point lead in Virginia IF he gets a solid Republican turnout.”

Bacon’s bottom line: First of all, it’s not clear where these numbers come from — I can’t find any data that Target Smart has published online. Second, upon what basis does Target Smart estimate whom early voters cast their ballots for? I’d like to know.

Third, what do we make of the fact that 13.5% of voters picked “other”? Libertarian Jo Jorgenson is on the presidential ballot, but the Libertarians are the only third party, and, as much as I like the Libertarians, I know there’s no chance he’s getting 13.5% of the vote. So, that doesn’t make any sense. Whatever.

Marshall’s conclusion of a four-point GOP lead in the presidential race is predicated on a “solid Republican turnout.” If, despite all massive early voting, you have to wait in line when you go to vote today, it might be an indicator that the GOP will defy expectations. But if your voting station looks like tumbleweeds might roll through, that’s a pretty good indicator that Republicans are sunk.

This entry was posted in Elections, Uncategorized and tagged James A. Bacon. Bookmark the permalink.