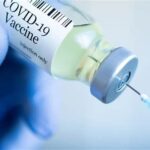 Over the period measured, January 17 to February 14, a vaccinated person had about a 15 to one advantage over an unvaccinated person (2 versus 31 out of 100,000) when considering risk of death, and slightly better than ten to one (9 versus 98 out of 100,000) when considering risk of hospitalization.   The blatant error I made probably reflected a bias to see that advantage, having gotten the shots and hoping the hesitant will come around.

Still pretty dramatic, you say.  There is more bad news.  The data is week by week, and looking at the most recent weeks, those gaps have dropped substantially.  One week’s data is a small snapshot but looking at all the weeks in July (probably fairly complete now) a trend of smaller gaps is evident.

I’d be happier if somebody who hadn’t demonstrated poor math skills took a look and mapped the trends. Month by month would have more validity than week by week.  If the data do show a strong deterioration in efficacy, it still means that the newly vaccinated get the same strong benefit for the first six to eight months the rest of us enjoyed.

I realized my error myself (one point for me) and I suspect others saw it.  Somebody who is inclined to dismiss the value of the vaccines probably didn’t want to call attention to my mistake because the real numbers were still encouraging.  Somebody who is hoping more will get the shots was happy I erred in that direction.  I’ll retreat back to the subject areas where I have more confidence.  But if interested, do check out that new data set.

All along there has been a strong suspicion that this bug was so effective most people would get it.  The case for that is getting stronger, but the data remains clear you want to be vaccinated before it hits.  Even in July, the odds against going into the hospital or dying were far better with than without.

A year ago with fewer cases being reported we were dealing with masks in all indoor settings, limited seating in restaurants, and strict limits on public gatherings.  None of those are in place in this midst of this surge.  If Kroger says, everybody wear a mask, I’ll comply, but so far, no such request is made.  Likewise no limits on inside dining or restricted seating on airplanes.

It is almost as if, deep in the bowels of government, a decision has been made to let this thing spread more rapidly.  In the debate between fast or slow, fast is now winning, with the assumption that medicine has caught up a bit and can save a higher number.  If people refuse to get vaccinated, then let them get a case, recover, and that too provides a level of protection.

The data also demonstrate why it is so hard to persuade some people of the dangers.  The risk remains quite low.  If during that seven month period, about 100 out of 100,000 unvaccinated Virginians ended up in a hospital, 99,900 did not.  If 31 of them died, 99,969 did not.   Those numbers of course include the spring, when prevalence dipped as low as it has since the start, but things were raging in January and February.

And nothing has changed the reality that age and pre-existing underlying conditions contributed mightily to the risk of hospitalization or death.

This entry was posted in Health Care and tagged COVID-19, Stephen D. Haner. Bookmark the permalink.