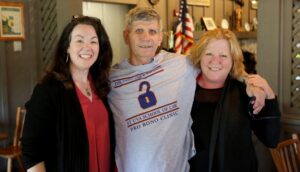 In August, Governor Northam granted a full pardon to Emerson Stevens. Stevens had been convicted of killing a young mother of two in 1985 in a small fishing village on the Northern Neck. The pardon was based on evidence that “reflects Mr. Stevens’ innocence.”

Stevens maintained from the beginning that he was innocent. His first trial ended in a hung jury. The second jury found him guilty and sentenced him to 164 years in prison.

He was paroled in 2017 after being held in jail and prison for more than 30 years for a crime he did not commit. Although free on parole, he continued to fight to clear his name.

The only physical evidence used to like Stevens to the crime was a strand of hair found in his truck. The method used to associate that hair with the victim has been discredited. After the sheriff who had been in office at the time of the crime retired, the new sheriff in 2016 “found” a box of evidence related to the trial. It contained numerous documents that cast much doubt on the prosecutor’s case, including an FBI report. None of this had been disclosed to the Stevens’ attorney at the trial.

The contents of the box were a major factor in the granting of parole to Stevens.

In addition to prosecutorial misconduct, the State Police investigator assigned to the case used questionable tactics. In a 2020 interview, he admitted to planting an idea in Stevens’ mind a scenario that placed Stevens near the victim’s house the night she disappeared. The investigator told the reporter, “If you can’t get a direct confession, you just try to get them to talk. They’ll say things against their own interest as a way to wiggle out. The whole thing is to keep people talking and steer them in the direction you want them to go.”

Potential witnesses claim the investigator bullied them and asked them to lie in their testimony. The investigator denies theses allegations. However, his conduct was a major factor in the overthrowing by a court of a high-profile murder conviction several years after the Stevens case.

In his attempt to clear his name, Stevens petitioned the federal court of authorization to file habeas application attacking his conviction. The three-judge panel unanimously concluded that Stevens had “make the prima facie showing” that he needed to make in order to file the habeas application in federal court. At the same time, the court went to great lengths to point out the ability of the governor to pardon convicted persons.

One of the judges on the panel went further than the official opinion. In a concurring opinion, she concluded:

“Based on each of these new developments — combined with the new facts Stevens discovered in the October 2016 box — I simply cannot see how any reasonable factfinder could convict in this case. There is now no reliable physical evidence, the prosecutor’s theory that Stevens’s knife caused the back wounds is no longer viable, the jury would seriously question at least one prosecution witness’ credibility based on his false testimony, and the FBI report at least makes the prosecution’s theory that the body traveled ten miles upriver much more difficult to believe.”

Obviously, these comments by the federal judiciary were instrumental in Governor Ralph Northam’s decision to issue a full pardon.

Emerson Stevens owes his freedom to the efforts of two attorneys affiliated with the Innocence Project at the University of Virginia Law School, Deidre Enright and Jennifer Givens. Enright first started on the case in 2009. In addition to preparing and filing the numerous briefs, they, especially Enright, spent countless hours investigating the case and digging up the new evidence needed to prove his innocence.

The story has something of a happy ending, in addition to the pardon. Stevens’ family never lost faith in him. At his urging, however, his wife did divorce him after his conviction and later remarried. However, his children continued to visit him in prison regularly and, eventually, they brought their children to visit, as well. His wife’s second marriage did not work out and, after her divorce, she and Stevens reconciled. When he was paroled, they got back together. He now works as a house painter.

But that ending does not get him back the 30 years of his life that the prosecutorial and law enforcement misconduct cost him. And the family of Mary Harding, the victim, has not gotten justice.

Author’s note:  Maria M. Kashino spent over a year investigating this case in 2018-2019 for the Washingtonian magazine. Her two-part story, setting the story out in great detail, can be found here and here. Her article on the pardon is here. Those articles are the source of much of the information in this post.

This entry was posted in Courts and law, Crime , corrections and law enforcement, Virginia Law and tagged Dick Hall-Sizemore. Bookmark the permalink.