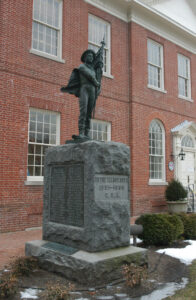 The Talbot Boys. As the debate over contextualizing history rages in Virginia there is an example of historical contextualization from Easton, Md., the issue started, as they often do, with a Confederate statue. In this case the issue surrounds “The Talbot Boys” statue which has stood at the entrance to the Talbot County Courthouse since 1916. As described by The Smithsonian, “A young soldier stands with a C.S.A. flag on his left side, holding it with both hands. The flag curls behind him, covering his back. He wears a broad-rimmed hat and an open shirt. The youth is meant to represent youthful courage and enthusiasm as portrayed in Longfellow’s poem “Excelsior.” The statue is mounted atop an inscribed pedestal, which is atop a base with plaques. A brass box containing the names of contributors was placed in the base.”

Honest observers would naturally ask several questions. First, why a Confederate statue in Maryland? Maryland was a slaveholding border state during the Civil War and never seceded. Maryland’s Eastern Shore was a hotbed of Confederate sympathy in the Old Line State but for every Talbot County boy who fought for the Confederacy two fought for the Union. There is no statue honoring Union soldiers from Talbot County at the Courthouse. Second question —  why erect the statue in 1916 … 51 years after the end of the Civil War?

There are two answers to that question. One holds that by 1916 the last of the Talbot Boys who fought for the Confederacy (and whose names are listed on the statue’s pedestal) were dying off. The statue was intended to honor their memory. This answer would be more compelling if a similar statue to Talbot’s Union veterans had been simultaneously erected. The other answer is that the statue was an edifice erected as part of an ugly trend toward segregation and Jim Crow. In many ways, Maryland’s Eastern Shore is far more southern than northern. It has derisively been called the Mississippi of Maryland. Racial prejudice was sadly common in the area. Black men were lynched on Maryland’s Eastern Shore. Race riots raged in the small city of Cambridge in 1963 and 1967. It’s not hard to imagine the Talbot Boys statue as more of a warning to African-Americans than a memorial to the Confederate soldiers. 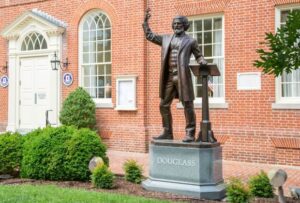 Fredrick Douglass and the other side of the story. Maryland’s Eastern Shore was also the home to early abolitionists, especially among the Quakers who settled there. A neighborhood called “The Hill” in the town of Easton bears witness to the other side of the Eastern Shore’s racial history. “It’s the oldest free black, African American neighborhood in the country that has been continuously inhabited and still in existence,” said Dale Green, an assistant professor in the Department of Architecture at Morgan State University. “In 1790, there were 410 free persons of color who lived on what we know as the Hill,” Green said — roughly twice the number who lived in Baltimore. Harriett Tubman was born in Dorchester County on the Eastern Shore and ran her famous Underground Railroad through the area freeing slaves and transporting them north. Fredrick Douglass, the escaped slave, statesman and famous orator, was born in Cordova in Talbot County, same county as the Talbot Boys.

Contextualization. In 2002 a plan was hatched to build a statue honoring Talbot-native Fredrick Douglass. After some toe stubbing around finances the money was raised. The question of where to place the statue stirred a debate. Some veterans groups insisted that the statue be placed somewhere other than at the courthouse because that location was reserved for military honorees (there is also a Vietnam veterans memorial there). Others people disagreed citing the fact that Douglass had once been jailed in the old courthouse on that site after temporarily escaping slavery. The council voted. The statue was going to be at the courthouse. Today, as one enters the courthouse the statue of The Talbot Boys is on the left and the statue of Fredrick Douglass is on the right. So, that ended the controversy … right? Hardly. There are still calls to remove the Talbot Boys statue with the town council voting just last month to keep it at the courthouse. It seems that this particular example of contextualization only goes so far.

This entry was posted in Culture wars, Race and race relations and tagged DJ Rippert, Don Rippert. Bookmark the permalink.