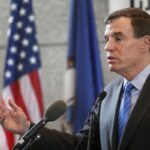 One key goal for many of Virginia’s new progressive Democrats has been repeal of Virginia’s venerable Right To Work Law, and in 2020 they crossed one milestone by passing repeal in a key committee. But the Democratic leadership, perhaps wary of losing the bill in the Senate or angering too many moderate voters, ended the effort there and snuffed that bill.

This year the same bill was stalled in committee, but patron Delegate Lee Carter, D-Manassas, did force a roll call with a motion to discharge the committee and bring it to the House Floor. It also failed.

Where General Assembly Democrats feared to tread, Virginia’s Congressional Democrats happily rushed in. Every House of Representatives Democrat from this state has voted for H.R. 842, sponsored by Virginia’s own Rep. Robert Scott, D-Newport News. All the Republicans were nays.

Scott calls it the Protect the Right to Organize, or PRO Act, and the hot potato is now firmly on the plates of Democratic U.S. Senators Tim Kaine and Mark Warner. Kaine’s vote of yea is as sure as sunrise, putting the heat on our senior senator with his lightly-worn pro-business mantle. Will he shed it to give the unions and his new president what they want?

Scott chairs the House Committee on Education and Labor, where the bill originated. If you doubt the intent to repeal state right to work laws, the committee has issued its own propaganda piece on the bill which includes this among the talking points:

Gives workers the power to override so-called “right-to-work” laws that prevent unions from collecting dues from the workers they represent. “Right-to-work” laws advanced by anti-union politicians are design to strip workers of the power and resources to defend themselves against wealthy special interests. The PRO Act allows employers and unions to enter into a contract that allows unions to collect dues from the workers they represent.

The other perspective, of course, is that right to work laws allow employees to make a free choice to join a union or not, to fork over a percentage of their pay or not, to finance the union’s preferred political candidates or not. Without doubt, Congress has the authority to take that away because it was the 1947 Taft-Hartley Act which gave states the authority to create such protections.

It followed on the heels of the tumultuous labor battles that hamstrung America’s war production efforts, with strikes crippling key industries at key times in World War II. It is a bitter history which has faded over 75 years (try Arthur Herman’s Freedom’s Forge), but the economic benefits of Taft-Hartley’s restraint on unchecked union power remain. They are now in real jeopardy.

Repealing any and all state right to work laws is just one aspect of this union wish-list bill, which also passed in 2019 but then faced a Republican Senate. Virginia’s Democratic House members, who campaign as pro-business and individual liberty when needed, have also voted for this:

There is a good summary of the bill from the employer’s point of view here, balancing the sales pitch put out by Scott’s committee. It also points to what might prove the Achilles Heel if the House insists on it, and those are the new rules sought to limit independent contractors. The National Law Review writes:

Unions have long pushed for legislation to expand the definition of “employee” and limit the definition of “supervisor” to bring a greater number of individuals under their sway. Independent contractors are also currently exempt from the scope of the (National Labor Relations Act).

The PRO Act would expand the definition of “employee,” adopting the California “ABC” test to exclude most workers from exempt independent contractor status. The PRO Act would also require employers to act at their peril, even if acting in good-faith; employers found to have mistakenly classified their workers as independent contractors would be in violation of the NLRA.

California’s hardly right-wing electorate has actually repealed many of the same provisions in that state’s Assembly Bill 5. The same battles over who is or is not an independent contract have raged in the Virginia General Assembly. Again, Congress is about to ride in and settle the argument for everybody, with the help of Virginia’s own elected representatives.

As progressive as the Virginia General Assembly has become, where it has failed to push dramatic change across the finish line the new Congress is stepping in. Right now, all 50 Senate Democrats are potential swing votes, but Mark Warner is one of the obvious ones. In reality, the key vote will first be on maintaining the filibuster rules. That goes, the world changes fast.