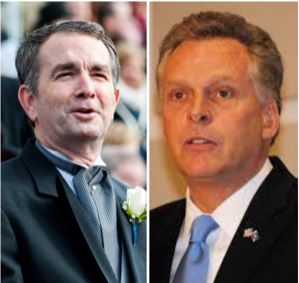 Opportunists? Or bosom buddies? You decide.

Shoot, Northam passed up the historic opportunity to endorse one of the two black women — State Sen. Jennifer McClellan and former Del. Jennifer Carroll Foy — to support McAuliffe for the Democratic nomination for governor. You know, the guy who violated Virginia’s constitution by issuing blanket restoration of rights to 206,000 felons in a shameless attempt to get more criminals on the 2016 voter rolls in time to vote for his old crony, Hillary Clinton.

The Virginia Supreme Court slapped McAuliffe for his illegal acts and he was forced to restore rights the legal way: One at a time.

It’s the fact that Terry even wanted it.

After all, in February of 2019, when the whole world saw Northam’s blackface/Klan costume yearbook photo, McAuliffe was quick to call Northam a racist and order him to resign. 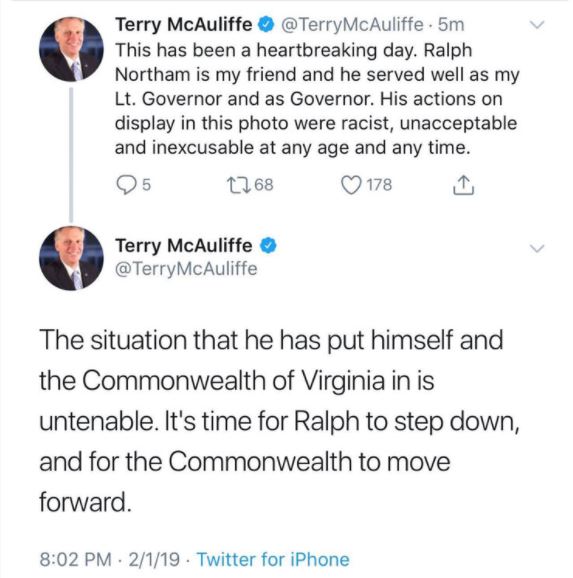 Northam paid no attention to his “friend” and instead spent that February weekend alternately apologizing, backpedaling, offering to moondance, admitting that was him in the photo, then saying it wasn’t and promising facial recognition analysis to figure out just who that was on HIS medical school yearbook page in 1984.

“If it wasn’t him in the photo, he should’ve said that on Friday,” McAuliffe said at the time. “Instinctively, you know if you put black paint on your face. You know if you put a hood on. And so if it isn’t you, you come out immediately and say, ‘This is not me.’”

What a difference two years makes. Am I right, Virginia?

In fact, The Washington Post, in its usual objective manner, just declared the Northam endorsement “a prize.”

“The endorsement is a prize for McAuliffe in the crowded and diverse field of contenders.”

Northam clung to the governor’s office like a barnacle on the ship of state even after every prominent Democrat in the country called for his resignation.

Once Dems realized that the two top Democrats in the line of succession to the governor’s throne were either accused of rape or had also pranced around in blackface, the party had a problem.

If Ralph resigned, Lt. Gov. Justin Fairfax and Attorney General Mark Herring likely would have to follow. Then Republican Kirk Cox, Speaker of the House of Delegates would have become governor.

Should Dems put politics above morality?

As if you have to ask.

And just like that, people like Terry McAuliffe, Mark Warner, Tim Kaine, Nancy Pelosi and Chuck Schumer who had all leapt aboard  the Northam-must-resign bandwagon suddenly went very quiet.

Now McAuliffe is hoping voters have forgotten Northam’s blackface/Klan/ Coonman controversy and his reaction to it as the former governor and his new best friend share phony smiles and backslaps in a craven attempt to retain power in Richmond.

This entry was posted in Politics. Bookmark the permalink.