Coming to a City Near You: Middle-Class Flight 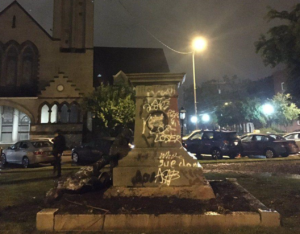 The latest to be vandalized: The Richmond Howitzers Monument.

As the City of Richmond becomes increasingly ungovernable in the face of continued protests and vandalism, a lot of people are saying to themselves, “I’m out of here.” Here’s a prediction: Middle-class flight will become the next big thing.

Richmond, like many other cities around the country, has enjoyed a strong economic revival in recent years. The city offered walkable streets, attractive neighborhoods and a lively cultural scene that attracted many young people. Businesses followed their creative-class employees to downtown, Shockoe Bottom and Scotts Addition. Taxes were higher and schools were problematic, but violent crime rates had fallen and people felt safe. Richmond seemed so much more vibrant and exciting than the suburbs of Henrico and Chesterfield Counties.

Everything has changed. Public order is eroding. As the state capital, Richmond has seen weeks of protests, destruction, and now vandalism unchecked by law enforcement. Yesterday, even though Governor Ralph Northam and Mayor Levar Stoney had proclaimed their intention to remove Civil War statues within the scope of the law, “protesters” couldn’t contain their rage. They tore down a third statue.

You won’t see members of the silent majority organizing counter-protests. They won’t even post yard signs, for fear of being vandalized. They’ll just vote with their feet. They’ll sell their houses and move to the suburbs. The ‘burbs may be sterile, but they’re safer.

Stoney gave the clear impression that he was acting to appease the mob. Police came under withering criticism by protesters for a couple of incidents: one in which the police deployed tear gas, and another in which a police car pushed through a crowd of protesters blocking its path, causing some minor injuries. Yet police have taken a largely hands-off approach to demonstrators defacing statues, pulling them down, and vandalizing nearby stores and residences.

Will letting the militants dictate policing policy make the City of Richmond a safer, more equitable place? Will it calm the mob and restore order? Obviously, some people think it will. Most likely, they won’t move. But others will disagree, and many of them will act on their convictions.

I know of one gentleman living on Monument Avenue who is distressed to see the destruction of the Civil War statues, which he predicts will drive property values lower. His front door was spray painted with graffiti during a recent demonstration. Despite having invested significant money and creativity into designing his house, he is seriously thinking of moving to Henrico County where sanity (for the moment) appears to rule.

Left-wing militants will go from denouncing gentrification as racist to denouncing middle-class flight as racist.

It’s not racist to want to live in a safe and orderly neighborhood, however. Don’t be surprised if middle-class black families lead the exodus. As Jason Riley observes in the Wall Street Journal today, America has a silent black majority. Not all African-Americans buy into the narrative of America as an irredeemably racist society. They just want to live normal lives.

The radicals may be relatively few in number, but they have the power of their convictions. And the Stoneys of the world are too ambivalent in their feelings — they’re of the establishment but they share many of the assumptions about systemic racism — that they cannot stand up to the militants. Will the city become ungovernable? It is too early to tell. But many people aren’t going to stick around to find out.

This entry was posted in Crime , corrections and law enforcement, Culture wars, Land use & development, Public safety & health and tagged James A. Bacon. Bookmark the permalink.

78 responses to “Coming to a City Near You: Middle-Class Flight”