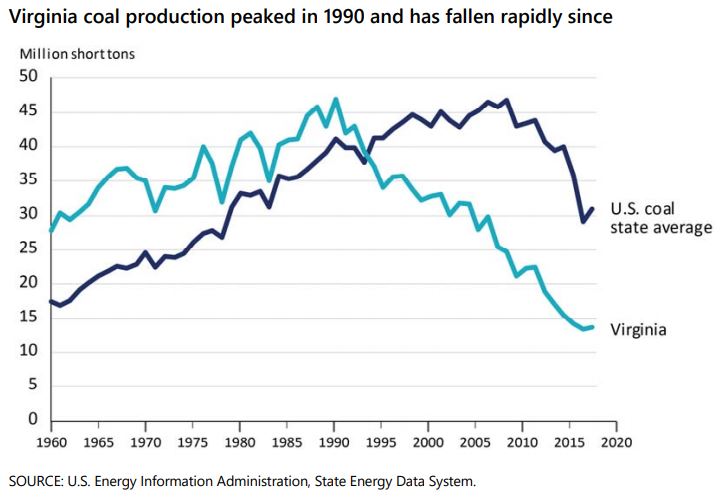 Virginia’s coal tax credits are obsolete, cannot forestall the decline of coal mining in the state, and should be eliminated, finds the Joint Legislative Audit and Review Commission in a new report, “Infrastructure and Regional Incentives.”

The state provides two tax credits to encourage coal production: The Coalfield Employment Enhancement Tax Credit and the Virginia Coal Employment and Production Incentive Tax Credit. The two programs have saved coal companies and electricity generators $291.5 million in income taxes between FY 2010 and FY 2018, according to the report on the cost-effectiveness of economic development incentives. But the credits ranked at the bottom of JLARC’s list of incentives based on economic benefits per $1 million in spending.

The  coalfield credit is not needed because Virginia’s remaining mines are competitive with mines in other states based on a labor productivity basis (tons per employee hour), JLARC contends. The credit targeting electricity generators is fast becoming irrelevant when the state is moving towards a 100% renewable electric grid and phasing out its remaining coal-fired power plants.

I am sympathetic to Virginia’s coal-mining communities in far Southwest Virginia, which have been devastated by the decline in coal production. But the decline of coal production is inevitable, and local lawmakers need to focus their energies on finding a new economic foundation.

This very subject has been on my mind recently as I wind up writing a history of the A.T. Massey Coal Company and the Massey family. E. Morgan Massey, who was CEO of the coal company for 30 years, identified the problem back in the 1980s. The single-most important driver of profitability and productivity of coal mining is the height of the coal seam. The cost of mining a six-foot seam is only marginally more than a three-foot seam, but production is twice as high. As the thick seams are mined out, productivity declines. Massey warned political leaders in West Virginia, where most of Massey Coal’s mines were located, to prepare for the time when economical coal reserves were depleted. After he took age-related retirement, he turned his attention overseas, developing coal mines in South America and China with coal seams as thick as 15 feet.

Massey’s advice then applies equally to Southwest Virginia today. The region has been mining coal since the 1880s. The thickest, most profitable seams have played out. I’m not intimately familiar with the geology; there may be some deep seams of some thickness remaining. But if the thick seams are far underground, accessible only by mine elevators, they require large up-front capital investments that few coal companies are in a position to make. Nothing can change this. Over and above the remorseless facts of geology is the remorseless economic reality that gas from fracking is cheaper than coal, and the equally remorseless political reality that Virginia and many other states are moving rapidly toward the use of solar and wind.

For all practical purposes, steam coal is dead in Virginia — or soon will be. The story is different, however, for metallurgical coal. Fortunately for Virginia, much of the coal that remains in the state is met coal, which is “cooked” to make coke used for steel making. Natural gas and renewables are non-factors in this market. JLARC is correct to say that production of met coal, much of which exported to Europe, is driven largely by the price, which fluctuates with exchange rates and the business cycle.

A complicating factor in any analysis is the effect of rail rates. The Virginia coalfields are dominated by Norfolk Southern; CSX has a minimal presence. Norfolk Southern has used its monopoly position to dictate rail tariffs from Virginia to the coal terminals in Hampton Roads. According to the U.S. Energy Information Administration, rail tariffs from Central Appalachia average $23 per ton of coal in 2018. In other words, rail rates have a significantly bigger impact on the competitiveness of Virginia met coal than any tax credit. I have yet to see an analysis that investigates how much of the economic advantage of the tax credit for met coal is captured by the railroads.

As an aside, 15% percent of the refunded coal tax credits went to the Virginia Coalfield Economic Development Authority (VCEDA), or $23 million between fiscal 2010 and 2018, to promote regional economic development. That program may be worth extending, if it can be shown that the VCEDA investments have been proven worthwhile. However, the 10 grant and loan awards are difficult to evaluate because the projects are either underway or represent long-term industrial-park development, training, and infrastructure investments whose positive benefits may not have been felt yet.

This entry was posted in Economic development, Taxes and tagged James A. Bacon, Rural development. Bookmark the permalink.