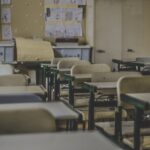 Here’s something to be grateful for during Thanksgiving week 2020: If you believe education is important, give thanks for Jared Cotton, superintendent of Chesapeake Public Schools.

Best of all, he has the unanimous support of the Chesapeake School Board.

Cotton and company are also following the guidance of the Centers for Disease Control. CDC Director Dr. Robert Redfield told reporters last week that his agency never recommended schools close in the spring nor has he recommended they do so now.

“The truth is, for kids K through 12, one of the safest places they can be from our perspective is to remain in school,” he said. “Today, there’s extensive data that we’ve gathered over the last two to three months to confirm that K-12 schools can operate with face-to-face learning and they can do it safely and they can do it responsibly.”

Meanwhile in Northern Virginia, teachers’ unions and associations are begging the governor to order the public schools that are open to close and go all-virtual.

“Education Associations in the Northern Virginia Region, representing more than 12,000 school employees, are urging you to return the entire Commonwealth back to Phase II of the reopening strategy, including a recommendation that public schools return to virtual learning as the safest option until case rates return to a downward trend and remain below 5% PCR as indicated by the CDC,” education association leaders said in a letter to Northam and local representatives.

Remote learning is a misnomer. It’s remote failing. At least for many students in Fairfax County – once the best school system in Virginia – according to a piece in Tuesday’s Washington Post, “Failing Grades Spike in Virginia’s Largest School System As Online Learning Gap Emerges Nationwide.”

Fairfax County Public Schools in Virginia, which has been mostly online since March, published an internal analysis this week showing that, between the last academic year and this one, the percentage of middle school and high school students earning F’s in at least two classes jumped by 83 percent: from 6 percent to 11 percent. By the end of the first quarter of 2020-2021, nearly 10,000 Fairfax students had scored F’s in two or more classes — an increase of more than 4,300 students as compared with the group who received F’s by the same time last year.

Naturally, children from stable, two-parent households with state-of-the art technology are almost managing to keep up. But children without those advantages are are falling hopelessly behind. Especially children with learning disabilities.

So what’s the solution?

Dumb down all the kids, according to Jack Schneider, director of the Massachusetts Consortium for Innovative Education.

“The default should be, once we’re in-person again, everybody could go back to the grade they were in March of 2020,” he told The Post. “We need to slow the pace down in the name of equity.”

I’ve got a better solution: Open all of the schools, declare teachers essential workers and fire the ones who refuse to teach, air traffic controller-style.

That won’t happen, so just move to Chesapeake.