Chesapeake Bay Foundation State of the Bay: The Bay is Regressing 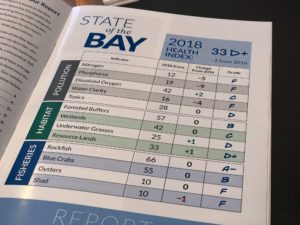 The first State of the Bay Report was issued in 1998 and Bhe bay received a “grade” of 27.  Progress was slow but steady through 2016.  The recently issued report (2018) represents a rare regression in overall score since the report was started.

Rain, rain, go away.  An extremely wet 2018 is primarily to blame for the regression in the bay’s health.  And wet it was.  DC’s official recording site at Reagan National Airport ended up with 66.28″ of rain, which broke the previous record of 61.33″ from 1889. This total is over 2 feet above DC’s annual average of 39.74″, and is nearly as much rain as the previous 2 years combined of 67.3″ (2016 + 2017).  Baltimore’s BWI Airport recorded 71.82″ of rain against an annual average of 43.62″.  That was the wettest year on record and the weather book dates back to 1871.  The runoff from all that rain caused significant regressions in nitrogen (-5), phosphorus (-9) and water clarity (-4) from the prior report.  One ray of sunshine in the report was the fact that underwater grasses notched a small gain from 2015-2016 despite the deluges.

The elephant in the room.  If 2018 were simply a very wet year the impact to the Chesapeake Bay could be attributed to a timing problem.  However, the CBF and many others see the increased precipitation as evidence of global warming.  If true, the excessive rain along with the concomitant excessive runoff will become the “new normal”.  This would amplify the importance of managing urban, suburban and agricultural runoff.

Pennsylvania pig pen.  It has become increasingly clear that Pennsylvania is, and intends to remain, the worst bay state from a clean-up perspective.  While Maryland has worked tirelessly to clean up the bay and Virginia has made solid progress, Pennsylvania continues to use the watershed as a toilet bowl.  There are even rumblings of a “boycott Pennsylvania and its products” movement circulating in Maryland.  It might well be time for Virginians to consider a similar stance against the Keystone State.  Why should Virginia taxpayers be willing to foot their fair share of the costs of saving the bay while Pennsylvanians continue to spread their filth downriver?