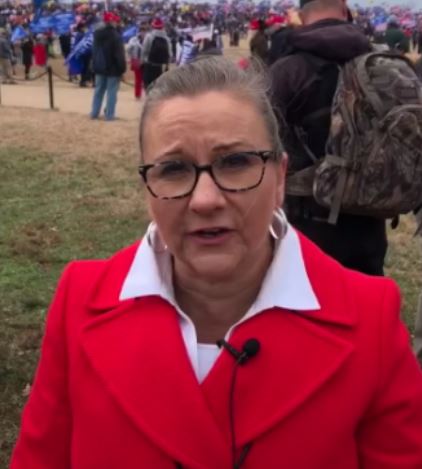 Screenshot from Chase attending the pro-Trump rally at the National Mall Jan. 6.

Yesterday the Washington Post published an account of an incident in which Chase’s aide brandished an AR-15 pistol at a man whom Chase said threatened them during a road rage incident. My immediate reaction upon reading the story was, “Oh, no, here we go again. More bat-dung craziness from Trump in Heels.”

By the time I finished reading the story, I was thinking, “Wow, good thing they had a gun!”

The Republican gubernatorial candidate and two aides had departed a campaign event in Virginia Beach and were “somewhere around Norfolk,” heading home when the incident occurred.

“I’m in the exit lane,” one of the aides, Shayne Snavely, told the Post. “This car starts coming over and, literally, beside us — pushing, pushing, pushing. I had to keep moving to the right. So then I slowed down and let him in front. And when he gets in front, they slowed down. The passenger actually opens the passenger door and is hanging out the door, literally standing up on the floorboard, screaming and making some kind of gestures. I then pass him and I go ahead and get off that exit.”

Snavely said the sedan followed the unmarked campaign van for two or three turns, then pulled up beside the van as he stopped at a break in the median to turn back toward the highway. He said the passenger got out of the sedan and walked toward the van with one hand in his pocket.

“And yeah, he got a gun in his face,” Snavely said, referring to the pistol he displayed through the closed window. “If he’d made two more steps, he’d [have] probably got shot.”

Ironically, Chase was participating by phone that very moment in an online debate sponsored by the Virginia Citizens Defense League. Quoting from the audio recording, the Post reported the following:

There’s a metallic clicking sound in the background and then a man in the van with Chase can be heard saying, “That’ll get your b—- a– in the car, won’t it?”

Slightly flustered, Chase immediately resumed addressing the VCDL. “Speaking of a Second Amendment moment, we just had to — oh, my goodness — we are exercising our Second Amendment rights right now [in] our car, where we had somebody road rage, trying to get in front of — get on us.”

I don’t take Chase seriously as a political candidate. She stakes out extreme positions on everything from guns to masks, and I don’t recall her having anything edifying to say about the lunch-bucket issues — from K-12 education, higher-ed, health care, job creation, criminal justice reform — that affect all Virginians. On the other hand, I believe she has been unfairly pilloried and made into Virginia Democrats’ favorite hate object.

We live in crazy times with super-heated political rhetoric, an era in which the Virginia Commonwealth University student council president can urge without consequence the killing of cops, and in which deranged people do shoot politicians. (Does anyone remember what happened to Steve Scalise?) The police-defunding movement is given a respectful hearing in Virginia as elsewhere, and the murder rate is climbing. Chase and her aides had no way of knowing whether the road-rage warrior who approached Chase’s car was a random maniac or someone with a political grudge.

Unless evidence surfaces to suggest that the incident was staged, Snavely was fully justified in pulling his gun. If I were a public figure today — especially one as outspoken and loathed as Chase — I wouldn’t go anywhere without protection. The right to self-defense is the most fundamental human right of all.

Whatever else you say about her, Chase is a colorful character. I just hope Republican convention delegates look past her swashbuckling demeanor to see her lack of substance on most issues.

This entry was posted in Gun rights, Politics and tagged James A. Bacon. Bookmark the permalink.