Charlottesville Police Morale in the Dumps 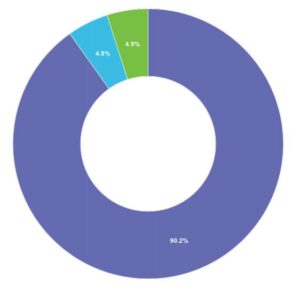 Question: Has the current political climate in the city caused you to reduce your normal policing activities (traffic stops, arrests, community policing, etc.) for fear of being targeted by community groups? Dark blue = yes. Light blue = no. Green = undecided.

Morale in the Charlottesville Police Department is in the tank. Large majorities of respondents to a survey conducted by the Virginia Police Benevolent Association said they did not believe that either Police Chief Rashall Brackney or the command staff had their backs; 90% said that the political climate in the city caused them to reduce their normal policing activities — traffic stops, arrests, community policing — for fear of being targeted by community groups.

Eighty-four percent of the 62 members who responded said they had considered other career options, and 81% said the police chief, in her role as a leader, made them feel less secure in their future with the Charlottesville Police Department.

“They don’t feel like they have a voice with their leadership,” said Michael Wells, senior vice president of the Police Benevolent Association’s Central Virginia Chapter Board. “I know it was bad working conditions, I just didn’t know that it was that bad. Lack of trust and leadership is a big thing that stuck out to me.”

Policing in Charlottesville has been in turmoil since the Unite the Right rally in 2017. The event, in which white supremacists from around the country clashed with anarchists, proved traumatic to the left-learning community in Charlottesville and Albemarle County. In the finger pointing that ensued, Charlottesville police were subject to widespread criticism. In 2018 the city appointed RaShall M. Brackney, an African-American woman, as chief.

The City of Charlottesville website describes Brackney’s impeccable progressive credentials. Noting her work in social and racial, justice, her biographical summary notes that she “is a recognized expert in the areas of harm reduction, procedural and restorative justice practices, and community-police relations.”

Among Brackney’s more controversial decisions was the dissolution of the department’s SWAT Team after allegations of misogynistic and other inappropriate behavior. Two officers resigned and one was terminated. The disciplinary actions were not received well. Meanwhile, against the backdrop of the George Floyd protests last year, a vocal defund-the-police movement in Charlottesville has urged a reallocation of funds from law enforcement to harm-reduction programs.

According to the Virginia State Police “Crime in Virginia 2020” report, Charlottesville had 101 sworn officers and 24 civilian employees. The college town is not known as a violent place. Indeed, the city reported no murders in 2019. However, according to the Crime in Virginia report, there were five murders in 2020. Negligent manslaughters increased from zero to three over the same time. On the other hand, following national trends during the COVID-19 epidemic, overall crimes were down by about 20%.

Bacon’s bottom line: Brackney’s defenders likely will defend her record on the grounds that she’s dealing with entrenched racism and misogyny in the ranks. But no good can come from a police force whose officers feel they will be exposed to second-guessing by community critics and higher-ups if an encounter with citizens goes bad. Risk-averse officers are less aggressive about enforcing the law. As the community senses the reticence, bad guys will exploit their greater freedom of action. We’ll see what happens.