Centers of Learning… Or Indoctrination? 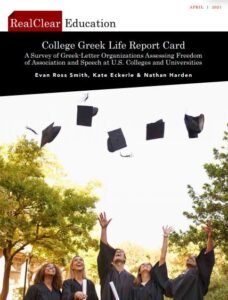 Three out of five (60%) college students belonging to fraternities and sororities across the country do not feel comfortable publicly disagreeing with a professor, according to a survey by RealClearEducation and Slingshot Strategies. Only two out of five (38%) said they felt comfortable doing so.

Two-third of students said they are hesitant to speak up online, half feel the need to self-censor, and a plurality said their college’s administration would be more likely to punish a speaker for making a statement than defend their right to express their views if a controversy over offensive speech were to occur on campus.

Nearly half (45%) felt pressure for their Greek organizations to be kicked off campus, although a slightly large percentage disagreed.

The survey broke out results for 11 Virginia universities whose students responded to the national survey, and gave letter grades to three for institutions where more than 10 students responded. Because the sample sizes for individual institutions are so small, they may not be representative of the full student population and should be used with great caution. Nevertheless, here they are: 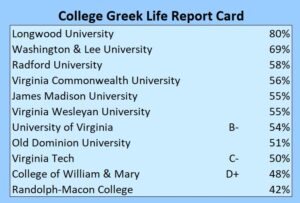 (Institutions not rating a letter grade had fewer than 10 students responding to the survey.)

The survey covered four broad categories: the impact of COVID-19, fairness and favorability toward fraternities and sororities on campus, organizational freedoms, and personal freedoms.