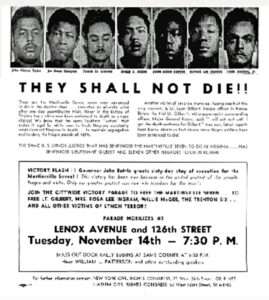 Historically, African Americans have been executed at rates that exceed their numbers in the general population. END_OF_DOCUMENT_TOKEN_TO_BE_REPLACED 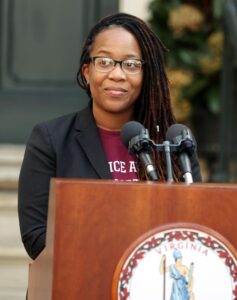 Earlier this week, the governor had a ceremonial signing for the Marcus David Peters bill. This is the legislation that establishes a system to alert authorities of someone in a mental health crisis in order that mental health professionals can respond rather than just police. It is named after a young Richmond man who was experiencing a mental health crisis when he was shot and killed while attacking a policeman.

At the signing ceremony was Princess Blanding, Peters’ sister. She had been the most active and vocal supporter and advocate for such legislation. If you thought she expressed her gratitude to the Governor and the legislature for enacting the far-reaching legislation, you would be wrong.

In her remarks at the ceremony, addressing the Governor and legislators associated with the bill, she said, “Please take a moment to pat yourselves on the back for doing exactly what this racist, corrupt, and broken, I also add, system expected you to do: make the Marcus Alert bill a watered down, ineffective bill that will continue to ensure that having a mental health crisis results in a death sentence.”  (The video of her remarks is here.) END_OF_DOCUMENT_TOKEN_TO_BE_REPLACED 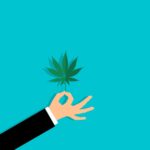 As arlnow.com reports, “Commonwealth’s Attorney Parisa Dehghani-Tafti and the attorney representing the alleged drug carrier agreed that the defendant would plead guilty to two felony charges and be placed on probation. After completing the probation and 200 hours of community service, he would be able to withdraw the pleas to the felony charges and instead plead guilty to two misdemeanor charges while having a $100 fine imposed but then suspended.” END_OF_DOCUMENT_TOKEN_TO_BE_REPLACED

Yes, the General Assembly is Still in Special Session 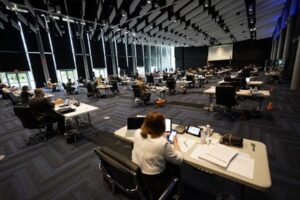 The Virginia Senate in its spread formation

It is time to check in on the progress of the endless session of the General Assembly. It is apparent that it was a mistake for the House to meet virtually. If the Delegates had been required to stay in Richmond the whole time, rather than being able to “attend” committee meetings and floor sessions from the comfort of their homes, they would have finished much quicker. But, maybe it is not endless; leaders of both houses are predicting they will be able to finish up by the end of next week.

Budget. The legislature has not gone through the formal process of getting the budget bill into conference and appointing conferees. Nevertheless, the chairs of the two money committees, Del. Luke Torian, D-Prince William, and Sen. Janet Howell, D-Fairfax, report they are close to a final budget deal, according to today’s Richmond Times-Dispatch.

But, Governor Northam is not happy with the approaches the two houses have taken and is threatening to throw cold water on any deal and veto it. He does not like the contingency spending that was in both the House and Senate versions of the budget bill, because those provisions commit funding that he wanted to keep in reserve due to uncertainty over the fiscal effects of the pandemic. He also does not like the legislature designating how most of the federal CARES money should be spent on COVID issues, thereby decreasing his flexibility over that $1 billion pot of money. (For a more detailed discussion of these issues, see my previous post here.)

Secretary of Finance Aubrey Layne repeated his earlier position, “We do not need a new budget for financial purposes.” That remark leads to the obvious question: “Then why did the governor call the special session?” END_OF_DOCUMENT_TOKEN_TO_BE_REPLACED

Hitting a Cop With a Pretzel Will Still Be a Felony

One of the pieces of the criminal justice reform package that caused some consternation on this blog has been killed in a House committee. SB 5032 (Surovell, D-Fairfax) would have amended the statute that makes assault of a public safety employee, including a law-enforcement officer, a felony, with a mandatory minimum sentence of six months. (Assault generally is a misdemeanor.)

As the bill emerged from the Senate, it included the following provisions:

END_OF_DOCUMENT_TOKEN_TO_BE_REPLACED 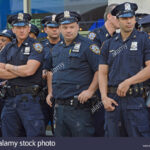 As yet another bitter conflict over a police officer’s use of deadly force divides America, this time a case in Wisconsin, Virginia’s General Assembly forges ahead with opening up the state to the police unions that usually rush to protect their members from discipline or dismissal.

The Kenosha Professional Police Association was quick with its call for everybody to step back and let that investigation proceed. That is a fairly balanced statement, but then it put out a statement defending the officers’ behavior that ended with an entire clip emptied into somebody’s back.  Unions advocate for their members.

Among all the bills introduced in the General Assembly’s special session response to these cases are a handful seeking to prevent some of the worst problems seen when unions stand up for bad cops. One is already defeated, but two are languishing in a House committee, where they may or may not be heard. All three have Republican sponsors.

A poll conducted for the Thomas Jefferson Institute for Public Policy two weeks ago indicates they would have public and bipartisan support. The poll over-sampled Black Virginians, to be sure enough were called to give credence to that cross tabulation. Their support was in line with all Virginians.

END_OF_DOCUMENT_TOKEN_TO_BE_REPLACED

Police and People in a Mental Health Crisis

The Senate Judiciary Committee reported many of the Democrats’ criminal justice reform bills at its meeting last week. I will discuss the most important ones, in some depth, in installments, rather than all at once. This first installment is on the interaction between police and mentally ill folks.

For many years, police officials and sheriffs have warned of the problems posed by mentally ill persons committing crimes, often petty ones, as well as by those having a crisis and acting more violently. This problem has been increasing over the years. (The reasons for this increase are beyond the scope of this post as well as beyond the scope of the knowledge and expertise of the author.) Law-enforcement officials have said publicly, repeatedly and correctly, that their officers have not been trained to deal appropriately with these folks. END_OF_DOCUMENT_TOKEN_TO_BE_REPLACED

The Hearings Are Over, Let the Battles Begin

The House Committees on Courts of Justice and Public Safety held three meetings/public hearings in preparation for the General Assembly’s consideration of criminal justice and police reform in the upcoming special session. The sessions were billed as public hearings, but, in actuality, most of the time was spent in hearing from invited speakers. Comments from members of the public were relegated to the end of the three-hour period and each speaker was limited to three minutes. At each session, only about 10 members of the public made comments.

The subsequent list of criminal justice legislative issues adopted by the House leadership for its special session agenda can be found here. Remarkably, all but three items were also included on the list released earlier by the Virginia Legislative Black Caucus. (See my compilation of that list here.) The only items not on the VLBC list was the Attorney General’s proposal that his office be authorized to conduct “pattern or practices” investigations of police departments and two vaguely-worded proposals relating to vetting law-enforcement applicants and diversifying the Committee on Training of the Department of Criminal Justice Services (DCJS).

The VLBC proposals missing from the Democratic Caucus list are ones to “defund” the police and regulate, by Code, the use of force by police. Obviously, the Democrats knew what they wanted going into the meetings and tailored their lists of speakers to ensure they got it. Based on the resulting list of proposals, the meetings may as well have not been held. END_OF_DOCUMENT_TOKEN_TO_BE_REPLACED