Can We Step Back And Ask, Why Not Forgive? 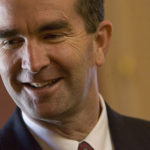 I want our political discourse to recognize everybody has made mistakes, everybody has at least one clay foot and most of us two, all who judge shall themselves be judged.  But the American political arena now resembles the blood-soaked sand of the Roman Coliseum, with the crowd cheering each subsequent execution.

Enough.  It needs to stop now.  If Northam gets through this, if a year from now he is chastened but still serving as our governor, America will be a stronger place.  If the mob on both sides takes him down, another victim will be sought and then another.

I have no idea yet what the truth is about that stupid 35-year-old photograph, and one correct word for whoever wore those racist costumes, whoever chose to publish those blackface photos in that yearbook, is stupid.  Initially Northam confirmed being one of the people, then denied it, leaving all of us left to wonder.

Frank Atkinson, who has hiked the high ground of Virginia politics during the decades when I wandered in the weeds, has this pastoral poem to a kinder, gentler past in this morning’s Richmond Times-Dispatch.  He’s right that when the cameras are turned off, the press corps out of the room, the mood changes and people can work surprisingly well together.

What’s changed is the camera is never off, the shrinking press corps supplemented by an explosion of camera phones and Twitter feeds, hungry for the gotcha moment.  That was in full swing right before somebody ambushed Northam with the yearbook page, and perhaps was the cause, that or the pipeline dispute.

I am consciously not referring to Northam with his current title, a title I normally always use even with ex-governors.  At question here is Ralph Northam the person, and the unrealistic perfection we demand of people who seek and hold elected office.

Ralph Northam woke up this morning the same person he was when he treated children in hospital, served in the General Assembly, and took the oath as governor.  If he were truly a racist, the people around him would have noticed, his behavior in private would show it.

I had the same attitude about Brett Kavanaugh, believing that if that one report were true, there would be a long parade of other credible witnesses confirming him as a sexual predator.  No such line formed to condemn Kavanaugh, and those who tried proved non-credible.  Now we get to watch for such a line forming to condemn Northam.  I’m betting none does.

I was prepared to doubt that photograph in the yearbook Friday, until Northam himself confirmed it.  “I am deeply sorry for the decision I made to appear as I did in this photo…”  In later denying that photo, Northam then confirmed another blackface incident, so the hue and cry continues.  In 1984 I would have winced at blackface, but admit it would have been the Klan robes I considered more racist and offensive.  I would not assume anybody who wore blackface to a party or performance 35 years ago was a racist, then or now.  Klan robes?  That’s another thing.

I wish Northam had stood by his original statement, stood by his assertion – which we can all make – that things we thought long ago, blatant examples of poor judgment in the past, ought to be balanced by the full life record.  Either we believe in forgiveness and redemption, or we don’t.

All signs are we do not.

The recent death of former delegate and stellar human being Bill Axselle got me thinking about the other ghosts I daily see populating the halls in Mr. Jefferson’s Capitol, dozens of deceased legislators in both parties I’ve seen up close and personal, at their best and worst.  No man is a hero to his valet and that was often my role.  Some of them remain heroic to me.

Those who had racist attitudes often revealed them in private settings.  Other deep sins were noted.  But in general such flaws were rare and the spotlight was on current attitudes, current behavior, not the past.  I can think of two, and you can fill in the names, who were not haunted by their past but by their continued behavior toward women.

Here is the big problem.  It is incredibly hard to persuade well-qualified people to run for office.  The pay is lousy, the constituent demands overwhelming, the time commitment crushing, and the partisan purists in both parties nothing short of insane at times.  Add to that the chance that some misstep from 30 years back wastes all your effort, overshadows every accomplishment, and you wonder why anybody runs.

Enough.  It needs to stop now.  We need to get back to a more rational place.  If Northam toughing this out gets us there, or closer to there, then it’s a good thing.