Can “Medium” Save Local Journalism? 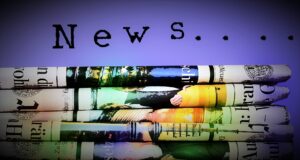 Image by kalhh from Pixabay

The medium is the message. Medium is an online publishing website founded by Evan Williams — who also co-founded Blogger and Twitter. The genre of Medium is sometimes called social journalism. As described in Wikipedia, social journalism “relies on community involvement, audience engagement, social newsgathering and verification, data and analytics, and relationship-building.” That’s all true. However, the biggest point is that authors get paid to write for Medium. Medium generates revenue by selling subscriptions at $5 per month. People who buy those subscriptions are called “members.” Members are eligible to enroll in Medium’s partner program. People in that program are eligible to earn money based on the level of engagement the author’s stories get from other members. While Medium keeps its payment algorithms secret most members believe that the amount paid is calculated based on the number of members who read the story and how long they spend reading it. In some ways Medium could be considered Uber for writers. It facilitates easy paid participation in the gig economy of writing.

The trouble with tribunes. Local newspapers are going the way of the Dodo. The issue has been extensively covered on Bacon’s Rebellion with articles like this, this and this. The only approach to this problem from established media outlets is an online subscription business model. Under that model you subscribe for a set amount per year, get a user name and password and can read the newspaper electronically to your heart’s content. However, to get a reasonable diversity of opinion across a state like Virginia would require multiple subscriptions. A starting set of subscriptions might include The Washington Post ($100 per year), The Daily Progress ($51.96 per year), The Richmond Times Dispatch ($51.96 per year), The Virginian-Pilot ($207.48 per year) and the Roanoke Times ($51.96 per year). That’s $463.36 per year. And what are you buying? A whole lot of information that is useless to you. For example, the “front page” of the website for the Roanoke Times features an article titled, “Roanoke County health center expands to new building.” That may be very interesting to some people but is irrelevant to me.  Under the annual subscription model I pay for that article as part of the total price whether I read it or not.

1+1=3? What if local journalism met Medium? A website dedicated to news and opinion across Virginia (or the mid-Atlantic) for a reasonable fee where writers got paid based on the amount of time subscribers spent reading their articles. There is editing. At Medium there are “publications” that aggregate members by topics of interest. You can subscribe to publications for free. When you log on, Medium will often present new stories from publications to which one subscribes. “Exploring History” and “Entrepreneur’s Handbook” are two of my self-selected subscriptions. Writing for popular publications is a good way to garner more views and more money. However, articles have to be submitted to publications for review by the editors before they are published. The concept of a “Virginia Medium” would have publications by geography or topic with editors that would decide if your writing was good enough to make it onto their part of the website. If your article was accepted people subscribing to the publication would probably see the article upon login and the author would have a good chance of being read.

Show me the money. Can writers really make money with Medium? Well, I’ve made 19¢ so far! The process works even if I haven’t gotten to the point of being able to buy a can of soda with my earnings. However, stories abound regarding writers who do quite well on Medium. One article describes a single mom who tried writing for Medium while also working what she described as a “dead end job.” After making $8,000 one month she quit her job in order to write articles for Medium full time. Another author wrote a single article in two hours that fetched $3,000. The author of the Medium review claims that he has a built a “six figure writing career” on Medium. Overall, 8% of “active writers” made at least $100 in July 2019 as reported by Medium. The most made by a single writer that month was $22,639.47, and the most lucrative single story fetched $6,720.35.

Putting it all together. I imagine a version of Medium dedicated to local journalism and commentary. An editor-in-chief decides what publications he or she will allow. The goal is to avoid overlaps and information chaos. Publication editors would review submitted articles and decide which to print “as is,” which to print with some modification and which to reject. Professional and amateur journalists would submit articles in the hope of getting paid. I also see older high school students, college students, stay-at home-Dads, retired people and bloggers contributing to “Virginia Medium.” Subscribers would get a combination of Bacon’s Rebellion and articles of statewide interest from all corners of the state. Local journalism would be reinvigorated through a combination of subscriptions, user generated content and the gig economy for journalism.

This entry was posted in Blogs and blog administration, Business and Economy, Media and tagged DJ Rippert, Don Rippert. Bookmark the permalink.