While social engineers plot ways to increase the cost of driving single-occupancy vehicles and push people into low-carbon transportation alternatives like bicycles and mass transit (see the previous post by Steve Haner about the Transportation & Climate Initiative), Virginians stubbornly stick to their cars. Mass transit ridership is down sharply across Virginia — even in the People’s Republic of Charlottesville with its environmentally conscious electorate and super-woke elected officials.

Five years ago Charlottesville Area Transit (CAT) had a ridership of 2.4 million. This year the transit expects to serve only 1.7 million riders, reports Greater Greater Washington (GGW). The situation is so dire that CAT’s new director, Garland Williams, says the transit agency is in a “death spiral.”

The transit system, in Williams’ estimation, is plagued by unreliability, decreasing coverage, and one-way routes. A housing-affordability crisis is pushing lower-income residents into surrounding counties that the transit system doesn’t reach.

GGW quotes Charlottesville-area transit advocates as suggesting the solution may be closer collaboration between the City of Charlottesville’s system, the University of Virginia service, and a program that serves regional commuters in outlying counties. Functioning as a regional transit authority might allow these entities to unlock new state and federal funding.

Yeah.  Maybe. But, then, there’s the problem that people would rather drive their own cars: going where they want, when they want, taking the passengers they want, playing the music/talk radio they want, and carrying whatever gear they want.

Mass transit is one of those things that people like in the abstract, especially when they envision “other” people riding the buses. People tell themselves that they “really ought to” ride the bus (or rail system) more often… but rarely get around to doing so because, let’s face it, most of the time it’s a lot more convenient to drive their own car. 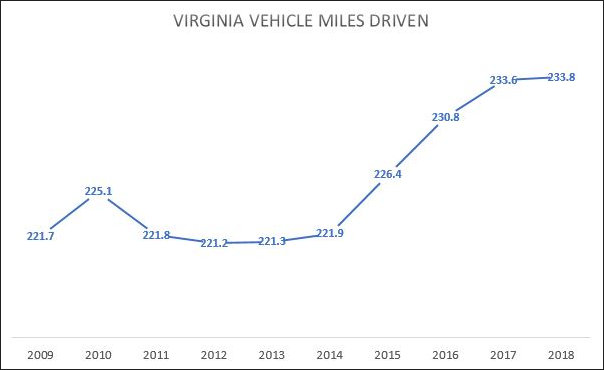 GGW may be correct to suggest that continued suburban sprawl contributes to the decline in transit ridership. On the one hand, the densification of housing in Charlottesville should increase the number of potential bus riders. On the other, with gentrification, lower-income households with a high propensity to ride the bus are displaced by affluent households more likely to own their own cars. I would be most interested to see a careful analysis of how those conflicting demographic trends affect bus ridership.

Getting back to the social engineers and their cap-and-trade idea… Advocates of the Transportation & Climate Initiative suggest plowing revenues into clean transportation modes like electric vehicles and mass transit. If the GGW hypothesis is right — if lower-income households are being pushed to the  suburbs and exurbs where bus transit is not remotely economical and they have no choice but to drive cars — higher gasoline prices will fall disproportionately upon those least able to afford it. Greenies can put all the buses they want on the streets, but given current trends, one can legitimately ask whether people will be induced to abandon their cars.

15 responses to “Can a Cap-and-Trade Tax Salvage Mass Transit?”