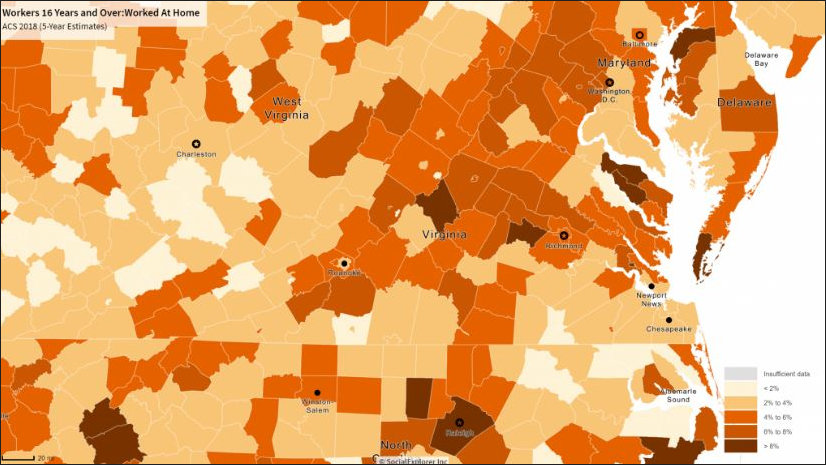 The Internet, pundits long predicted, would emancipate people from the necessity of living near where they worked. The connectivity provided by cell phones, laptops and broadband would allow people to plug in at home…. or even while lounging by the pool or on the beach. It was a nice fantasy, but telecommuting never lived up to its potential. Far from freeing people to live in the bucolic countryside, the logic of the Knowledge Economy impelled more people to the city. A new theory emerged: that the clustering of knowledge workers led to such huge gains in productivity and innovation that it outweighed any lifestyle benefits to telecommuting long distances. The bigger the labor market, the greater the pull.

Now Hamilton Lombard, a demographer at the University of Virginia’s Demographics Research Group, has been so bold as to suggest the dynamic might be shifting again. New Census Bureau data, he writes in the StatChat blog, suggest that over the past three years “the places Americans chose to live are becoming less connected to where their employer is based.”

What’s different all of a sudden? Perhaps the tighter labor market. Lombard suggests. As certain sectors of the economy experience labor shortages, employees have more bargaining power. He doesn’t say this, but I’ll throw it out there for consideration: Instead of pushing for higher wages, perhaps more people are using that bargaining power for more control over their work-life balance.

Whatever the reason, the impact of the increasing work-from-home phenomenon is potentially profound. Outside of Virginia’s major metro areas themselves, the regions that seem particularly effected are the Shenandoah Valley and the Chesapeake Bay.

Nationally, writes Lombard, the number of Americans who primarily work from home rose by 1.6 million between 2015 and 2018. If telecommuters constituted an industry, they would comprise the fastest-growing one in Virginia. The number doubled between 2000 and 2018 and continues with no sign of let-up. As of 2018, about 6%, or nearly a quarter million Virginians, worked at home. (The numbers do not include mobile workers who might work in their cars, in coworking spaces, or coffee shops.)

Certain occupations better lend themselves to distance working than others. According to Bureau of Labor Statistics numbers cited by Lombard, “management and consulting services” has the highest rate of telecommuting — 25%. Computer systems design follows close behind with nearly 20%, then insurance carriers, and accounting/tax prep/bookkeeping.

Working at home is mainly a white-collar phenomenon. Not surprisingly, among Virginia’s metro areas, the rate of telecommuting takes place in metros with the largest percentage of white collar workers: Charlottesville and Northern Virginia. But telecommuting as a percentage of the local workforce is highest in exurban and rural jurisdictions.

You don’t see a high rate of telecommuting in, say, the coalfield counties of Appalachia. There is a strong link between distance working and the availability of amenities — waterfront and sailing on the Northern Neck (Richmond and Westmoreland Counties) and Eastern Shore (Northampton); the Wintergreen resort (Nelson County).

On the East Coast, telecommuters have tended to move to counties along the Blue Ridge and Atlantic that also attract vacationers and retirees, notes Lombard. The Asheville metro in North Carolina’s Blue Ridge,  has the fifth highest share of telecommuters among all U.S. metros.

Teleworkers have typically helped diversify rural counties since teleworkers are more likely to work in industries that are underrepresented in rural areas. Teleworkers also on average earn more than most workers who live in rural counties, helping boost their community’s overall income. Though teleworking has accounted for a third of job growth outside Virginia’s three largest metro areas since 2000, its role in rural job creation has gone mostly unnoticed. In Virginia’s non-metro counties, teleworking accounted for nearly 90 percent of job growth during this period.

Let me repeat the last sentence for emphasis: “In Virginia’s non-metro counties, teleworking accounted for nearly 90 percent of job growth during this period.”

The telework trend buttresses the need to invest in rural broadband infrastructure, says Lombard. Just as postwar investment in the Interstate highway system supported the growth of the suburbs and the Sunbelt, investment in broadband and improved transportation will give employees the ability to work remotely and travel to the office when necessary.

“While it would be bold to predict that the internet will have the same impact on where Americans live as the interstate highway system did,” he says, “the demographic impact of the internet will likely grow more visible as the 2020s progress.”

This entry was posted in Labor & workforce, Telecommunications and tagged James A. Bacon. Bookmark the permalink.