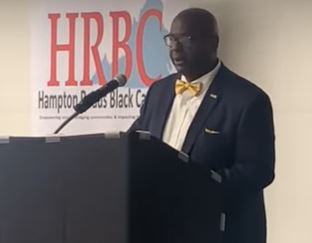 Unidentified member of the Hampton Roads Black Caucus announces group’s support for Youngkin. First hint to Youngkin campaign: when someone announces their support, include their name! Second hint: Give us more than 20 seconds. Let them explain why they endorse you!

Last week Republican gubernatorial candidate Glenn Youngkin received the endorsement of the Hampton Roads Black Caucus (HRBC). It was the first time that the civil rights organization, which had endorsed Democrat Terry McAuliffe eight years ago, has backed a Republican for governor since it was founded in 2012, according to the Youngkin campaign.

The poll generated no local media interest other than a predictable story from Fox News, as well as a brief story on WTOP-TV.

Is HRBC really a “Republican” group? I don’t know enough about the organization to say one way or another. Its website describes the group as a Political Action Committee that supports candidates who back their agenda. The website lists four pillars: support for black-owned business growth, a quality education that prepares students of color “to be contributing members of democracy,” Black capitalism as a tool for economic development, and improving the “structural capacity and leadership skills” of Black community development officials.

This certainly doesn’t sound like Black Lives Matter. But it doesn’t sound especially Republican. Once upon a time, most Democratic Party officials would have been completely comfortable with such an agenda.

Why would HRBC support Youngkin over McAuliffe? The HRBC has not explained itself on its website or Twitter page, and the Youngkin campaign provides only a brief video clip of the announcement. We have to rely upon Youngkin’s spin: ““Terry McAuliffe has hurt Black Virginians by turning his back on our schools and children, making our communities less safe, and causing the cost of living to explode.”

Youngkin argues that McAuliffe and Democrats have been “disastrous” for the Black community, lowering school accreditation standards, overseeing a disastrous decline in Black educational achievement, releasing violent criminals into the community, and making communities less safe. Virginia’s job performance post-pandemic is among the worst in the nation — 44th. I totally agree. I just don’t know if members of the HRBC agree, or if they had other reasons.

I don’t want to overplay the significance of the announcement. We’ll know Youngkin has moved the needle if he wins the endorsement of NAACP chapters around the state. I expect that most Black groups still back McAuliffe.

But the monolithic Black voting bloc does seem to be eroding. As a whole, Black voters are not nearly as progressive as the “woke” Whites running Washington and Richmond right now. You see, they have to live with the consequences of woke policies in a way that Whites do not. Their communities are experiencing the surge in violent crime. Their school children failed SOL tests at unprecedented rates after their schools shifted to remote teaching last year. Their schools are plagued by routine violence this year, even as woke Whites talk about yanking School Resource Officers from schools. They lost jobs disproportionately from government-mandated COVID shutdowns.

It may not be coincidence that President Biden’s job performance rating, while eroding overall, has plummeted among Blacks. According to HotAir.com writer Jazz Shaw, Black approval for Biden tanked just this last month from 86% to 64% in the latest AP/NORC poll. (That poll did not explore the particular reasons for the Black disenchantment.)

Whatever they are, the reasons are likely to be very different from what you’ll hear from the Black talking heads on CNN and MSNBC. Woke media ignore the views of Blacks who don’t go along with the party line.

Important elements of the Black electorate are commonly overlooked by the media. In his press release Youngkin mentioned three specific groups — business owners, faith leaders, and retired military service members. He has been targeting those constituencies within the larger Black community through his outreach efforts. It’s worth noting that his Black running mate, Winsome Sears. is a vet. (The HRBC endorsed her, too, as well as Attorney General candidate Jason Miyares.)

Once upon a time, Republicans wrote off Black voters as a lost cause. Youngkin is not making that mistake, and I expect he’ll out-perform previous gubernatorial Republican candidates in the Black community. Whether he can peel off enough voters to swing the election remains to be seen. One way or the other, the Black voting bloc is looking a lot less monolithic than it used to.

This entry was posted in Elections, Race and race relations and tagged James A. Bacon. Bookmark the permalink.