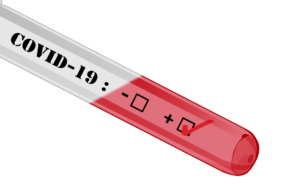 Sine wave. The third wave of COVID-19 has been spreading across the world and has come to America.  As should have been expected it has also come to Virginia. Many European countries have enacted lockdowns that would be considered draconian by most Americans. Several U.S. governors have also dramatically reversed the re-opening of their states’ economies in order to thwart the spread of the virus. Federal infectious disease experts are sounding the alarm. “We are entering the most concerning and most deadly phase of this pandemic . . . leading to increasing mortality,” said the Monday report from Deborah Birx, coordinator of the White House coronavirus task force. Birx predicts that the US will see more than 100,000 new cases per day this week.

In the Old Dominion, as WAVY reported yesterday, “Virginia’s [7-day] daily average of 1,306 cases per day is more than 100 cases per day above previous highs in August and May, mostly spurred by spikes in Southwest Virginia, and a notable increase in Northern Virginia. Virginia’s case incidence rate per 100,000 residents is now 15.3, which is considered especially high.” WAVY further reports that Virginia’s case per day total will reach 2,000 by the end of January per UVa’s COVID-19 model. Meanwhile, our governor is unconcerned, citing historical statistics that prove (to him) that Virginia has no real need for concern.

It seems that the stage is set in Virginia for a set of knee-jerk proclamations that will send our state’s economy back into the tail spin we experienced this spring.

France.  Seventy-nine and four-tenths new cases and 0.62 new deaths per 100,000. Much sicker and more lethal than the U.S. (as of 2 Nov). The death toll is France’s highest since April 15. People are allowed to leave their home only to go to work (if they cannot work from home), to buy essential goods, seek medical help or to exercise for one hour a day. Everyone found outside has to carry a written statement justifying their journey, as happened in the first lockdown in March. Social gatherings are banned.

Germany. Through what can be assumed to be a statistical anomaly, Nov. 2 was a particularly low day for cases and deaths vs. the prior three days: 14.4 cases and 0.06 deaths per 100,000. Considerably less sick and less lethal than the U.S. Restaurants, bars, theaters, cinemas, gyms and other leisure facilities closed in a four-week “wave-breaker” shutdown. In a warning shot across the bow of Biden’s plan to hire 100,000 new contact tracers, German officials say they can’t track the source of three-quarters of new coronavirus cases. This despite the fact that Germany was praised for its effective testing and tracing efforts in the spring.

Italy. Forty-seven new cases and 0.59 deaths per 100,000. Sicker and more deadly than the U.S. (as of Nov 2). New measures coming this week will include further business closures and travel restrictions between regions deemed “at risk.”. A 9p.m. curfew is under consideration. Prime Minister Conte has resisted pressure for a new national lockdown preferring regional measures instead. A red, yellow green system will be implemented. Three regions are already in red status. In those regions, most shops will be closed. Schools will remain open for students up to sixth grade. Older students will learn over the internet.

U.S. Despite the bad news from Europe and surging cases at home very few new COVID-19 mitigation measures have been implemented. Examples: New York (COVID incidence rate per 100k = 8.4) has required travelers from non-neighboring states to test for COVID-19 before and after visiting the state. Massachusetts (COVID incidence rate per 100k = 12.6) has reimplemented quarantine rules for travelers who visit the state from Connecticut and New Jersey. A stay-at-home order, with exceptions, has been issued for residents between 10 p.m. and 5 a.m. Limits on gatherings at private residences have been reduced from 25 to 10.

Where is the liberal outcry? Over and over again for month after month liberals decried President Trump’s lack of effectiveness in combating COVID-19 in the U.S. They endlessly pointed to Europe as an example of efficient and effective government intervention. Now the second wave has broken and the Europeans are locking down their countries and their economies. Where is the demand from Democrats for the U.S. to do the same? Where are the Democratic politicians in Virginia excoriating Ralph Northam for his laissez-faire attitude toward the second wave? Virginia’s COVID incidence rate is higher than Germany, New York and Massachusetts. Yet Germany acts while Northam dithers. Cuomo acts while Northam dithers. Massachusetts acts while Northam dithers.

The final shoe to drop. Eventually, sleepy Ralph Northam will awaken from his prolonged slumber and leap into a full-blown panic. The time for measured approaches to contain the surge will have passed. It will be close this, close that. Ban this, ban that. In other words, chaos. But by the time Virginia is expected to hit 2,000 cases per day there will (almost certainly) be a new president in the White House. A president with a COVID plan that is not materially different than what is being done now. Then who will Virginia’s liberals blame for the catastrophe in our state?