Bear With Us. It’s a Slow News Day. 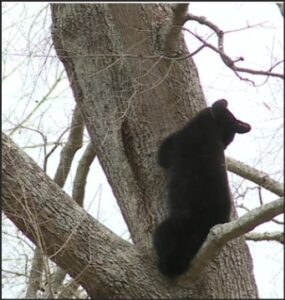 Just what we need right now.

As the national and local news turned once again to COVID, COVID and more COVID, a mama black bear and her three cubs provided Tidewater with a brief but delicious distraction.

The furry family was first discovered on Monday, napping high in a tree in the Western Branch section of Chesapeake.

The appearance — and the fact that it occurred on Bruin Drive — was a gift to journalism. There is nothing news outlets crave more during the dead week between Christmas and New Years than a human interest story with a happy ending. Cuddly animals? A bonus.

The media was so hungry for a non-COVID feature that the quartet of suburban interlopers made the national news.

BEARS ON BRUIN: Four black bears are in a tree on Bruin Dr in a residential neighborhood in the Western Branch neighborhood in Chesapeake. The road is shut down. Animal control and the state are on site figuring out how to get the bears down. @WAVY_News pic.twitter.com/yfcklOz3gC

WAVY-TV 10 reported that the mother bear was estimated to weigh about 150 pounds, the male cub looked to be about 70 pounds, and the girls were about 40 pounds each. Turns out black bears in Virginia don’t really hibernate. They forage for food all year long.

The bruins hung out in the Bruin Drive tree for hours, dropped down once to grab a bird feeder and sample some tasty garbage before heading back up to their perch.

Close to midnight Monday the bears climbed down and ambled out of the neighborhood. They were last seen heading in the direction of the Great Dismal Swamp, home to most of southeastern Virginia’s bears.

News crews held vigil during the bear event, even as they urged other people to stay away. Officials from Fish and Wildlife were concerned that traffic and gawkers might spook the animals so the street was blocked off.

Bears occasionally make appearances around Tidewater. We once had one on Norfolk Avenue in Virginia Beach near the oceanfront. I remember WAVY’s Andy Fox standing near the tree, telling folks to stay away as cars screeched to a halt and bikes arrived from every direction. The street was packed with onlookers.

Seems Chesapeake residents are better behaved than we are.

Now, back to COVID coverage.