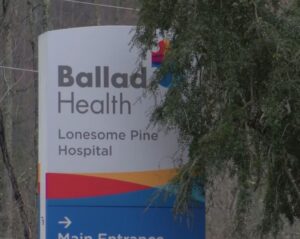 As a condition of the merger between Mountain States Health Alliance and Wellmont Health System in 2018, the combined entity, Ballad Health System is required to periodically update Virginia regulators on health metrics for its far Southwest Virginia service territory. Those quality measures and actual performance must be accessible to the public on the Ballad website as well.

The bottom line: Quality measures have been a mixed bag. Some measures have improved; a few have declined. As detailed in Parts II and III of this series, Ballad met expectations for cost cutting and restructuring. What isn’t clear from the limited data available is why there is “slippage” in some numbers from one year to the next. Important questions arise.

Are declines attributable to the chronic nursing shortage in Southwestern Virginia and Northeastern Tennessee?

Three Virginia hospitals had to readmit patients within 30 days of discharge at a worse rate than the national average. Did Ballad, incentivized to reduce inpatient days, discharge patients too soon?

Or did “social determinants of health” — such as housing insecurity, lack of transportation, or memory loss affecting the ability to take medications as prescribed – overwhelm Ballad’s best efforts?

The CMS Care Compare website, last updated in October 2020, has reviews for five of Ballad’s Virginia hospitals and one nursing home. (Dickenson Hospital is a critical access hospital with two beds and did not have enough measures reported to calculate a score, and Mountain View Regional is now a nursing home.) The star ratings are 3 for average, 4 for above average and 5 for much above average. CMS combines several individual measures into the categories shown below. 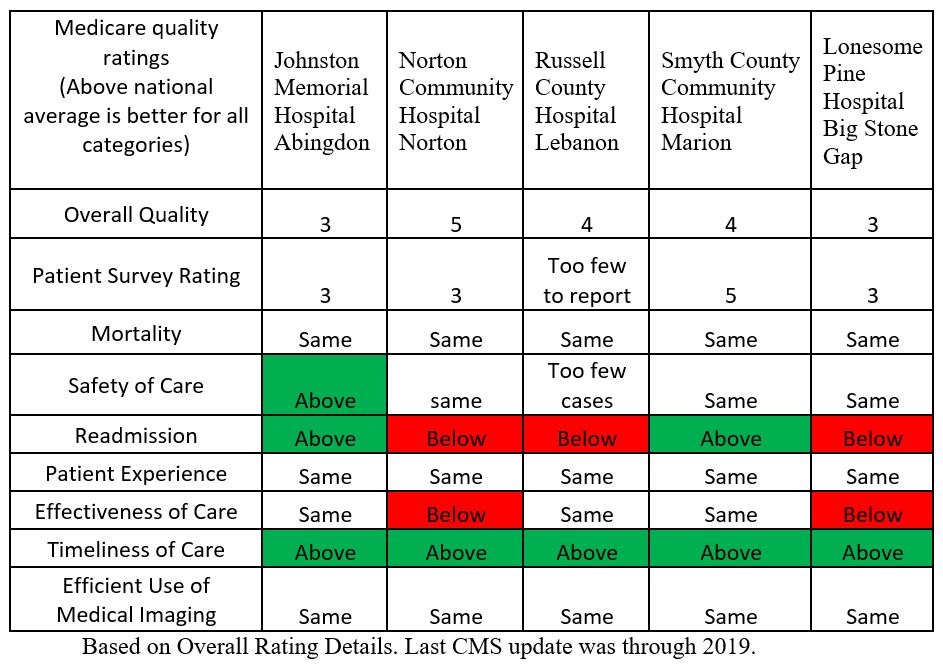 CMS gave Ballad’s nursing home an overall rating of an above-average 4 stars. Health inspections were slightly better than state and national averages. The most recent CMS health inspection, which took place September 6, 2018, resulted in seven citations, all listed as “minimal harm” or “potential for actual harm for few residents.” The national average is 8.1 and the Virginia average is 12.5. There were no complaint inspections between 3/1/20 and 2/28/21. An infection control inspection on 6/22/2020 had no citations.

Mountain View rated 5 stars for staffing, much better than state and national averages. Quality of care rated 3 stars, about average.

System-wide for Ballad’s hospitals, Ballad stated in its Fiscal Year 2020 Annual Report, “The results for thirteen of the seventeen harm measures monitored under the COPA and CA have improved over the 2017 baseline, with reductions in harm ranging from 10% to 60% per measure.”

Ballad acknowledged in the report that four system-wide measures ­­­–- pressure ulcers, MRSA (Methicillin-resistant Staphylococcus aureus), colon and hysterectomy surgical site infections –- were above the 2017 baseline rates for the partial Fiscal Year 2020. The narrative omitted the fact that five measures were worse than the previous fiscal year 2019.

To be fair, some of the measures were minimally above the baseline. Four hospitals had a “hip fractures from a fall after surgery” baseline of .10 and a rate of .11 in subsequent years. One had a .13 rate for 2019. But the system-wide score of .05 shows it is possible to lower the rate.

You can view a breakdown of Ballad quality measures at Ballad Merger Qualty Measures 2017-2020.

After a discussion of what data would be shared publicly, Tom Eckstein of Arundel Metrics, suggested that the smaller facilities should be grouped together to increase the sample size “n” and reduce random variation “noise.” Brenden Rivenbark, Senior Policy Analyst of the Office of the Commissioner, agreed. He also suggested that Ballad “report the data to the States by facility, but that the States would present the data in aggregate.”

Several measures were adopted. This leaves open the question whether Ballad will choose to share CMS reports on quality-safety measures for each hospital in the future. If not, the public will not have detailed quality measures information by hospital. Only a few general points listed on the CMS Hospital Compare site compare national and state averages or system-wide averaged numbers, but CMS provides no good way to track if hospitals are improving or slipping.

The prospect of Ballad making regional improvements in Rural Health, Behavioral Health, Children’s Health and Population Health was a major factor in allowing the merger. Ballad’s plans, and their financing, have been disrupted by the pandemic. What will that mean going forward?

Part V in this series, “Ballad Health Merger and the Pandemic,” will discuss how Ballad handled the COVID-19 epidemic.

This entry was posted in Health Care and tagged Carol J. Bova, The Ballad Merger. Bookmark the permalink.