Assaults on Police Up Slightly in 2020 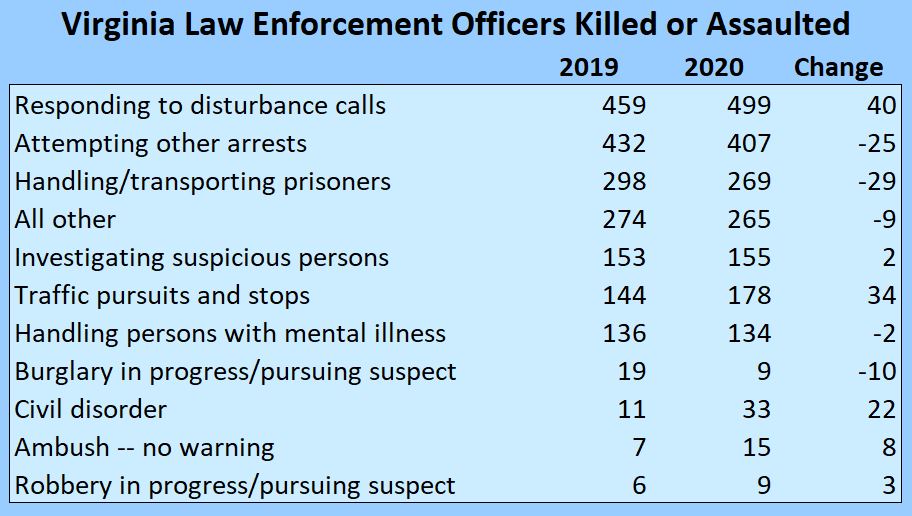 Last year was unprecedented for the number of street protests and anti-police rhetoric in Virginia. Police morale plummeted in the face of public hostility. How did the wave of unrest translate into physical danger for police?

According to the Crime in Virginia 2020 report, which  tracks the number of Virginia police officers killed and assaulted, there was an uptick in anti-police violence — to 1,973 assaults on officers in 2020 from 1,939 the previous year, an increase of 1.7%.

But the data does shows changes in circumstances. Although the number of officers injured in “civil disorders” was relatively trivial compared to all sources of assaults, it did triple year-over-year to 33. Protests have simmered down this year, so that number is likely to subside. Alarmingly, however, the number of law enforcement officers killed in “ambush” attacks doubled from seven to 15.

As a backdrop to the widely publicized story of the controversial April traffic stop of a Black army lieutenant by two policemen in the town of Windsor, the number of assaults on police during traffic stops and pursuits jumped 24% in 2020. In other words, motorists were increasingly likely to respond to traffic stops with violence. Little wonder that Virginia law enforcement officers are particularly wary about getting into violent altercations with motorists.

Five hundred and five injuries were reported. (Officers could sustain more than one injury.) The vast majority (458) were classified as minor. However, one assault was fatal. Three attacks resulted in broken bones, three rendered the officers unconscious, six in severe cuts, 11 in internal injuries. Twenty-four others were classified as “major.”