Are You In…The Hugo Zone?

Are You In The Hugo Zone?

Delegate Tim Hugo (R-Centreville) is the point person for a state income tax proposal centered on less-than-full conformity with the federal Tax Cuts and Jobs Act.  It only helps a narrow subset of Virginia taxpayers, those in The Hugo Zone.  We will now try to take you there.  (If you want to imagine Rod Serling’s voice in your head, feel free.)

Would that do you any good?  How does it compare for you with the competing Republican-sponsored bill to adopt those conformity points, but also bump up the state standard deduction from $6,000 to $12,000 for a couple filing a joint return?  A version of that was introduced by Delegate Chris Peace (R-Hanover.)

Hugo’s bill saves you some state tax money if you 1) want to itemize deductions and 2) have an amount of allowed deductions which fall in The Hugo Zone.  The bottom limit of that zone for joint filers is $12,000 (the proposed new state standard deduction) and the top range is $24,000 (the new federal standard deduction.)  It is not everybody who itemized before, just some of them. 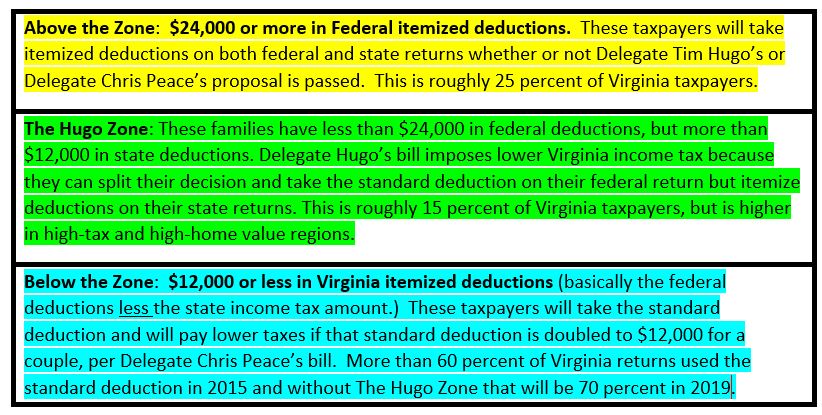 The boundaries of The Hugo Zone (click for larger view.)

If you are really interested, pull out your 2017 return or your work papers for 2018.  Did you take itemized deductions in 2017?  If so, what was that amount? Be sure to look at the deduction total on the state return, because that is a different amount than the deductions on your federal return.   Uncle Sam lets you take off the amount you paid in Virginia income tax, but Virginia makes you add it back.  No state tax break for state taxes.

If the amount of your allowed Virginia deductions in 2017 was over $12,000 you enter in the Hugo Zone.  But if your federal allowed deductions exceed $24,000 (even with the new cap on state and local taxes accounted for) then you are not in the Hugo Zone.  Your deductions are so high you should itemize on both returns anyway.

The basic idea of allowing Virginians to keep using itemized deductions on their state returns, while filing a federal return with the standard deduction, had an obvious flaw.  It only made sense if Virginia stayed with the old rules on deductions, rejecting some or all the other changes in the rules flowing from the new federal rule.

That is what Hugo has now done by proposing to ignore the $10,000 cap on deductible local taxes.  The population of the Hugo Zone grows, especially in high-tax and high-home value neighborhoods.

Why stop there?  Why shouldn’t the General Assembly reject the many other changes detrimental to taxpayers? The state and local tax deductions cap (SALT cap) is not the only thing pushing people away from the Hugo Zone.

The new federal rules take away the ability to deduct interest paid on a home equity loan.  Quite a few people have used that in the past – shouldn’t the General Assembly reject that and maintain that deduction?

Most casualty losses (fire, storm damage) have been deductible in the past, but going forward only casualty losses in federally-designated disaster zones will be deductible.  There is a tighter cap on the mortgage interest deduction.   If the General Assembly is worried that a millionaire’s taxes on a mansion might not be fully deductible, should it not also make sure the interest payment on that house (or second house) can also reduce the tax hit?

The most common deductions going away fall in that broad “miscellaneous” category, including work-related expenses not reimbursed by your employer, some educational expenses, etc.  Plenty of non-millionaires have used them in the past, but they are going to go now.  Future alimony payments might not be deductible.  Moving expenses also fall off the list of deductible costs.

Reverse course and allow those deductions to remain in Virginia, and the population of The Hugo Zone grows even more!

When the smoke clears after the 2019 General Assembly, it may be the best we can say about Virginia is it is a selective conformity state, and quite selective at that.  That is not a positive step for tax policy, uniformity, ease of compliance or economic competitiveness.