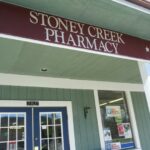 A form letter mailed this month announced the death of another local independent pharmacy, this one in the bustling community of Nellysford.  Residents of Nelson County’s Rockfish Valley, including those in the large Wintergreen community, will join plenty of other rural areas in the U.S. without a pharmacy close by.

“Very few independent pharmacies show a profit now unless they sell CBD oil, still unproven, do compounding or find other niche markets that small populations…cannot support,” wrote pharmacist Bob Ladd, who first owned the business in 1988, got out and then bought it back in 2017 in a last ditch effort to make it viable.  A new Dollar General store nearby was a major blow to his non-prescription sales, he added.

Rising drug costs are a major driver of medical inflation and a source of great consumer anxiety, but apparently are not creating economic health for everyone in the pharmacy industry.  There are many reasons these stores close, but advocates for the pharmacists point to the economic influence of the pharmacy benefit managers (PBMs), who stand between the manufacturers and the insurers, retailers and hospitals.

“…despite originally being created to negotiate lower drug prices for health plans, PBMs today leverage their largely unchecked power by keeping drug prices artificially high to maximize their revenues. That’s because higher list prices can generate higher rebates and more opportunities to pocket the difference. This also serves as a disincentive for PBMs to offer lower-cost drug alternatives even when they are readily available,”  wrote Christina Barrille and Rebecca Snead in a recent column for the Richmond Times-Dispatch.

About the same time the issue was the focus of a 60 Minutes segment on CBS.

Even greater depth is provided by a set of articles last year in Ohio’s The Columbus Dispatch. Just the bullet points on the main page (here) get the gist across.  Don’t think for a minute things are much different in Virginia.

Barrille, executive director of the Virginia Pharmacists Association, gave a recent talk to a conservative policy gathering, with a focus on a failed 2019 bill backed by her group.  House Bill 2223, sponsored by Delegate Israel O’Quinn of Bristol, made it out of the House on a tight 53-46 roll call (here), but went on to die in a Senate committee 11-4 (here.)  There is no partisan pattern to the votes, but they provide some good questions for challengers to raise.  The two pharmacists in office, Delegates Chris Jones and Keith Hodges, were yeas.

The bill’s failure followed a successful 2017 bill which prohibited a common practice in PBM and insurance contracts, a provision preventing pharmacists from telling customers they might save money paying out of pocket.  But this new bill – also part of a national economic struggle – went much further.

According to the legislative staff summary, the 2019 bill allowed customers to avoid a mandate they use mail order and fill orders in a pharmacy instead, prohibited a pharmacy benefit manager from imposing different copays or fees on retail community pharmacies, and prohibited PBMs from charging different drug prices to retail community pharmacies.  The lobbying must have been intense.  We can find out later exactly which organizations opposed the bill.

No, we probably can’t, because Virginia’s lobbying disclosure laws are a travesty.

The Virginia pharmacists may have better luck challenging the hold pharmacy benefits managers have on Virginia’s Medicaid program and the state’s own insurance plan for its employees. Barrille and other advocates are convinced huge additional savings would be achieved if Virginia simply took Medicaid pharmacy benefits away from the PBM system entirely.

New budget language (here, the last three paragraphs in the string) requires an actuarial report by October 1 on the most cost-beneficial method for providing pharmacy benefits, with all the rebates and internal accounting tweaks considered.

The ultimate prize, as is often the case, is doing business with the government. Medicare is a federal problem, but Medicaid is co-managed with the states.  The Centers for Medicare and Medicaid Services just issued new guidelines on tracking and accounting for discounts and rebates when calculating and applying medical loss ratios to managed care programs like PBMs.

Some in the General Assembly have been putting the state’s Medicaid program under similar pressure to be sure all rebates and discounts are passed along to the state.  This new language and the actuarial report it requires lay the groundwork for a major effort at transparency and change during the 2020 General Assembly.

In West Virginia (here), the state took back control of the pharmacy benefits in July 2017, expecting to save $30 million per year.  An analysis released earlier this year indicated that turned into $54 million saved instead, while at the same time the payments to West Virginia pharmacists rose by $122 million.  The taxpayers paid less but the vendors got more with the middle man out of the game, they claim.

Ohio followed in 2018 (here), in part responding to the pressure from The Columbus Dispatch and its 40-plus story newspaper campaign.

In Virginia, the recent decision to expand Medicaid to hundreds of thousands more Virginians could expand the potential benefits from a similar approach.  The Senate Finance Committee was told recently that more than 80,000 new enrollees are now receiving one or more prescriptions.  That is only going to grow.