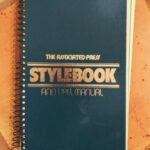 Well, this is alarming. At a time when trust in the media is cratering, the Associated Press Stylebook wants journalists to replace the word “riot” when describing mayhem in the streets with “milder” terms such as “unrest.”

It seems reporters who accurately describe what they see when the streets are filled with looting, shootings, fires and lawlessness make some people uncomfortable.

The AP believes it is better to examine the roots of the, ah, unrest, than to tell the ugly truth.

This is the state of modern journalism. Any wonder most newspapers are circling the drain?

The AP Stylebook, also known by its full name The Associated Press Stylebook and Briefing on Media Law, is an English grammar style and usage guide created by American journalists working for or connected with the Associated Press.…rules for usage as well as styles for capitalization, abbreviation, spelling and numerals.

Journalists have a more succinct description: The bible.

When I left The Virginian-Pilot in 2017, I took with me the copy of the AP Stylebook that I got when I was hired. Back then it was also a “Libel Manual.” The copyright on mine is 1984. Outdated in a million ways but still useful when trying to remember the difference between homicide and murder and when to use “cement” and when to use “concrete.”

Newspapers are under no obligation to follow the AP rules, but many do.

You may have noticed one of its most recent edicts: Black, when referring to African-Americans, is capitalized. White is not.

AP’s style is now to capitalize Black in a racial, ethnic or cultural sense, conveying an essential and shared sense of history, identity and community among people who identify as Black, including those in the African diaspora and within Africa. The lowercase black is a color, not a person. AP style will continue to lowercase the term white in racial, ethnic and cultural senses.

Any publication not subscribing to the Upper-Case-B rule risks being seen as racist, which is why papers have been quick to adopt the change.

But the latest rule from the AP stylebook is absolutely appalling:

Use care in deciding which term best applies: A riot is a wild or violent disturbance of the peace involving a group of people. The term riot suggests uncontrolled chaos and pandemonium…

Focusing on rioting and property destruction rather than underlying grievance has been used in the past to stigmatize broad swaths of people protesting against lynching, police brutality or for racial justice, going back to the urban uprisings of the 1960s.”

In other words, people may be rioting, but they have their reasons. Better to deal with underlying issues than report accurately about the mayhem in the streets.

In a piece headlined “The Associate Press Advises Suppressing The Truth About Riots,” The New York Post wrote this:

AP suggests replacing “riots” with “milder” terms such as “unrest.”

Give us a break.

Property destruction has a human toll. … The unprecedented national destruction may lead to insurers excluding coverage for riot damage in the future — not that plenty of innocent small businesses aren’t already finding their policies badly insufficient.

This destruction hits minorities hardest. People who’ve spent years toiling to build a business have had it all lost in a night.

The Post also pointed out that most of the riots didn’t appear to be led by Black Lives Matter members but by Antifa. You know, flabby white anarchists with face tattoos.

The AP decree is a lot like the Orwellian video Michelle Obama made this week, insisting that we didn’t really see what we saw this summer when cities were burning, police officers were being attacked and people were being beaten in the streets.

The protests were mostly non-violent, she insisted, Trump’s a racist for calling for law and order.

I have news for Mrs. Obama and the spongebuckets who cook up the nuttiness in the AP Stylebook. The damage caused by RIOTS this summer cost an estimated $1 billion and several dozen people lost their lives, including law enforcement officers.

No, not every demonstration or protest devolved into rioting, but plenty did.

The fact that the Associated Press is urging reporters to abandon truth telling in favor of squishy euphemisms may make the media the biggest casualty of the summer of 2020.

You know, the summer of riots.

The column is republished with permission from Kerry: Unemployed & Unedited.

13 responses to “AP Urges Reporters to Sugar Coat the News”