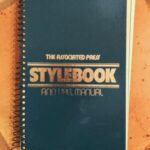 The AP Stylebook has long been the “bible” of American journalism. This guide attempts to standardize language and grammar in newspapers. It deals with everything from when to use “concrete” and when to use “cement” to the use of hyphens when describing Asian or African Americans. New rule: No hyphens.

In recent years it’s also become the bible of political correctness. For instance, the editors scold writers who cling to the term “illegal alien” to describe, well, illegal aliens. The AP prefers euphemisms such as, “migrants” or “undocumented immigrants.”

Last fall, the Stylebook cautioned against using the incendiary word “riot” for mobs of people tossing incendiary devices in the streets of American cities. Those were “protesters” and “protests.” No matter how many buildings burned or people were killed.

Recently the AP declared that when writing about blacks the B should be capitalized, but the w should remain lower case for whites.

The AP is deeply worried about offending women who sleep with married men.

Don't use the term mistress for a woman who is in a long-term sexual relationship with, and is financially supported by, a man who is married to someone else. Instead, use an alternative like companion, friend or lover on first reference and provide additional details later.

Seriously? Mistress is offensive? It’s actually a polite description of the position.

Don’t take my word for it. Here’s what Merriam-Webster says: Mistress: a woman other than his wife with whom a married man has a continuing sexual relationship.

Makes you wonder if cheaters hired a P.R.. firm to bring pressure on the Stylebook staff.

The AP Tweet ignited a social media storm with more than 7,000 responses. Very few were sympathetic to adulterers. Many were witty.

I immediately weighed in with “sidepiece” and wondered if the AP would demand that it be two words or one.

Some snidely suggested that the editors of the Stylebook must be cheating on their spouses.

Others simply mocked the Stylebook for its Orwellian take on language.

A Tweeter who goes by “Rachel,” for example, wondered if “murderer” would be next on the AP hit list: Don’t call them murderers, use another term like “person who was in a room with two alive people and then became the only alive person in there” and provide details later.

I get it. Mistress does seem a tad antiquated. In fact, I can’t think of the last time I saw it used in a news story.

I think I have a better word to describe women who sleep with other women’s husbands.