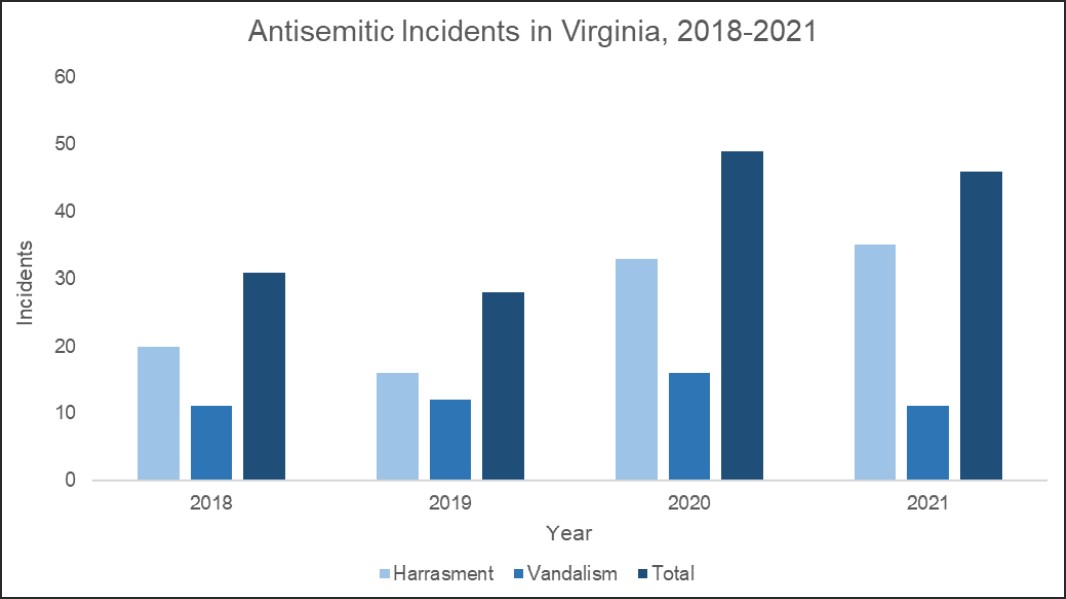 Source: Anti-Defamation League, as republished by “Combating Antisemitism in Virginia“

In 2021, 411 reported antisemitic incidents impacted residents of the Commonwealth, reports the study, based on Anti-Defamation League data. These incidents showed a 71% increase over the 292 reported in 2018. Fortunately, none of these events involved the infliction of physical harm to anyone.

Antisemitism became a high-profile issue in 2017 during the Unite the Right rally of White supremacist groups, which was marked by numerous chants, and signage and sieg heils that singled out Jews for vilification. The vast majority of White Supremacists came from outside the state, but the event gave Virginia a bad name.

“Antisemitism is a wide-ranging problem that cuts across diverse segments of American society and exists on both the extreme left and extreme right sides of the political spectrum, as well as within the gradients in between,” states the report.

Far-right hate can be seen in the distribution of propaganda flyers and pamphlets alleging Jewish allegiances to communist governments, Jewish racial inferiority, and Jewish control over governmental institutions. On the left, antisemitism is a familiar feature on college campuses, where pro-Palestinian sentiment leads many faculty and students to denounce pro-Israeli Jews and enact Boycott, Divestment, and Sanctions (BDS) policies.

Among the commission’s 21 recommendations is one that would update Virginia’s hate crime laws to classify antisemitic hate crimes as an ethnic hate crime in addition to being a religious hate crime. Other proposals would prohibit Virginia universities from adopting anti-Israel BDS measures.

This entry was posted in Race and race relations, Uncategorized and tagged James A. Bacon. Bookmark the permalink.